A version of this was published in The Santa Fe New Mexican
May 1, 2009

The bad news: Joe Ely summed up the current economic situation 20-plus years ago, “Prices keep rising every day and I keep getting paid the same.”

The good news: there’s so much free music on the Internet, you can go crazy trying to keep track of it, as long as you can afford to pay your Internet bill.

My latest Internet music obsession is WFMU’s Free Music Archive, a huge library of free — and legal — downloads of cooperating independent artists. There are thousands of tracks, which you can stream as well as download. You can build your own playlists.

WFMU is an amazing radio station in Jersey City, New Jersey. It started this archive, but other stations, music venues, and independent labels also have contributed. For instance, Bloodshot Records, that venerated home to “insurgent country,” has posted a couple of tracks from a wide sampling of its albums, new and old, by artists including the Waco Brothers, Andre Williams, Justin Townes Earle, Charlie Pickett, and Bobby Bare Jr.

One of the most interesting sections in the archive is the “Old-Time/Historic” section. Not only are there some great old recordings by the likes of Sophie Tucker (the Last of the Red Hot Mamas!) and Billy Murray, but there are some interesting new artists dabbling in the old styles. More on one of them later.

Of course, most of the artists are folks you’ve probably never heard of. As I noted, these are independent artists, some of whom are so independent that they aren’t even on indie labels. Some of the better known are Billy Childish (who has a batch of literally phoned-in solo blues tunes from a WFMU show called Phoning It In), Dengue Fever, Pierced Arrows (the new band from Fred and Toody Cole of Dead Moon), Alan Vega, The Moaners (an all-woman blues duo featuring Melissa Swingle of Trailer Bride), Edith Frost, Xiu Xiu, and garage rockers like the New Bomb Turks and The Cynics.

Here are some of my favorite discoveries on the Free Music Archive: 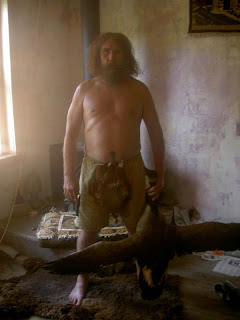 * Little Howlin’ Wolf. James Pobiega has nothing to do with the late Chester Burnett, the original Howlin’ Wolf. He’s a gigantic (I’ve read height estimates from 6-foot-6 to 6-foot-9) street musician from Chicago who looks like a caveman and growls some of the most primitive gutbucket blues I’ve ever heard. He makes T-Model Ford sound like Debby Boone. But there’s another musical side to him.

In addition to the blues, LHW doubles on sax and performs crazy Beefheartian free-form jazz. Truly some of the wildest stuff I’ve heard lately.

* Modey Lemon. This is a Pittsburgh trio that sounds like The Blues Magoos (remember “We Ain’t Got Nothin’ Yet”?) might have sounded if they had a Moog synthesizer. On one track here the radio hostess jokingly introduces them as Golden Earring (remember “Radar Love”?). Normally I don’t care much for synthy stuff, but Jason Kirker plays his Moog like a Farfisa from the Forbidden Planet. 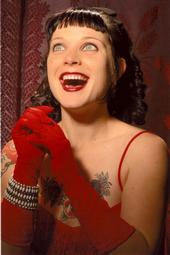 Singing Sadie. I found her filed with the “Old Time/Historic” stuff, so when I first listened to her songs “Put Down the Carving Knife and Everyone in Town Wants You Dead,” I thought they were from some bizarre 78s from the ’30s. I later learned she’s “the all singing all dancing queen of the burgeoning underground show tunes scene.” She wails happily off-tune in her Aussie accent like Betty Boop on angel dust. And she tap-dances.

I think I’m in love.

It’s becoming a summer tradition in Santa Fe. I’m talking about FrogFest, a showcase for the mighty Santa Fe record label Frogville. It’s on Saturday, May 30, at the Santa Fe Brewing Company (37 Fire Place, 424-3333), starting at 2 p.m. and lasting until the witching hour.

In case you haven’t been paying attention to local music since the turn of the century or so, Frogville Records, which is celebrating its sixth anniversary this year, is responsible for some of the most impressive New Mexico albums of this millennium. The label is the creature of co-founder, CEO, and president for life John “Big Frog” Treadwell, a big charismatic guy (and self-described “artist, hermit, and entrepreneur”) who looks like a hippie Viking and must be certifiably insane to want to run a record company in these dark days for the music biz. But Treadwell’s major accomplishment — besides getting some fine music on disc — is making possible a creative community of musicians who continue to delight and amaze. There also will be several non-Frogville acts, including Peacefield (a San Antonio band whose CD was produced by Bill Palmer of Hundred Year Flood), the Sean Healen Band, The Strange, and Stephanie Hatfield & Hot Mess.

Indoor sets are planned by West with his pal Mike the Can Man (West recorded an EP of Can Man songs a few years ago) and John Courage (who has been playing bass with HYF in recent months) with Gilchrist.

So go hear some great music. And while you’re there, buy a couple of CDs. Support your local musicians! Admission is $10, and kids under 12 get in free. The first 100 people who pay at the door (translation: not freeloading Santa Fe scenesters) get a free T-shirt.