A version of this was published in The Santa Fe New Mexican
May 15, 2009

Unlikely as it might seem, one of the greatest living soul men happens to be a Canadian of East Indian descent living in Europe. I'm talking about his majesty King Khan (born Erick Khan), who, with his band The Shrines, will amaze and delight all his subjects with the group's latest album, What Is?!

Khan is known — though not nearly as known as he should be — in two musical contexts. With his Montreal pal Mark Sultan, he's part of a stripped-down blues/punk/doo-wop duo called The King Khan & BBQ Show. But it's with The Shrines that he really shines. They're an extremely tight, though thoroughly insane, nine- or 10- or 11-piece band complete with horn section and a go-go dancer (billed as "Bamboorella, Go-Go Queen of the Underworld"). I was fortunate enough to see this band last summer at the Pitchfork Festival in Chicago. With The Shrines cooking ("like Stax/Volt all-stars on crystal meth," is what I wrote at the time) and Bamboorella gyrating like a crazy cheerleader, Khan bounced and lurched around the stage like a cross between Screamin' Jay Hawkins and some Hindu god.

A little explanation about this album. What What Is?! is is a reissue of The Shrines' most recent studio album, which was released by the German label Hazelwood in 2007. But, for reasons known only to the gods of commerce, it wasn't released in the U.S. at that time. It's now on Vice Records, which last year released the band's "greatest hits" compilation The Supreme Genius of King Khan. Five of this album's 14 songs also appeared on Supreme Genius.

Songs like "Land of the Freak," "I See Lights" (I love the bongos here), "I Wanna Be a Girl," and "Le Fils de Jacques Dutronc" (French lyrics on this one) show Khan and The Shrines at their hopped-up, rock 'n' soul finest. A classic tune is "In Your Grave," which starts out with a basic garage-rock guitar hook, and then takes a sharp turn to the funky with a snaky blaxploitation wah-wah guitar. The band plays like a dynamite truck with no brakes going 100 mph down a mountain road.

But Khan can also get mellow and meaningful. "Welfare Bread" is sweet, Southern-style soul with lyrics like "You don't have to pay your bills anymore, now/You just have to eat my welfare bread." 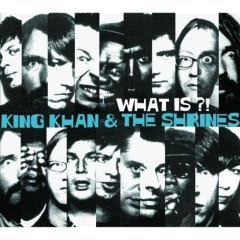 But the biggest surprise on What Is?! has to be the five-and-a-half minute "Cosmic Serenade." What can I say? It's cosmic. I'd read before that Khan considers one of his biggest influences to be the music of Sun Ra, but I never really heard much evidence of that until I heard this song. Meandering horns and primitive, jangly percussion (tambourine? rainstick?). Khan doesn't start singing until nearly two minutes into the track and then not for long.

After hearing this, I think Khan and the band ought to try Pharaoh Sanders' "The Creator Has a Master Plan."

You also can hear Sun Ra echoes, though not quite as obviously, in the opening minute or so of "Fear and Love." It's a fast-paced tune, but Khan doesn't play the soul shouter here. Instead he sounds like some laconic, psychedelic ranger. There's an irresistible multihorn freakout where most people would have put a solo.

The album ends with "The Ballad of Lady Godiva" — no, not the stupid old Peter & Gordon hit. This is an uncharacteristic folk-rockish, lo-fi tune with droning keyboards (by Freddy Rococo) and what sounds like a dulcimer. Khan sounds almost like Bob Dylan as he urges everyone to take off all their clothes.

It's great that Vice is rereleasing this album. I hope someday the company rereleases Khan's other albums, Three Hairs and You're Mine (originally on Switzerland's Voodoo Rhythm Records) and Mr. Supernatural, as well. And perhaps Khan will get his supernatural self to a recording studio soon and make a new album. I believe America is ready. 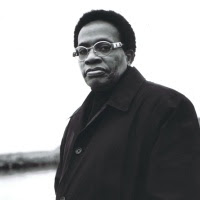 Blue Day by Howard Tate. This album is the latest effort by Tate, an underappreciated soul man of the 1960s who re-emerged earlier this decade after decades in the wilderness of drugs, tragedy, and undeserved obscurity. Blue Day doesn't quite have the excitement level of his 2003 comeback album, Rediscovered. It's fun and very listenable, but too many tunes are run-of-the-mill.

A couple of the songs here are remarkable, however. The opening tune, "Miss Beehive," is a cautionary tale apparently inspired by troubled soul singer Amy Winehouse, the "Miss Beehive" who "likes to misbehave."

Sings Tate, "Everybody knows she puts something up her nose/And she don't want to go to rehab." But, with Tate's experience in life's gutter, there's compassion in the lyrics. "The girl is so defensive/Why does she act so tough/All of us should reach out to her/And send her a little love."

And there's "Stalking My Woman," a minor-key, first-person account of an obsessed lover who doesn't care about a judge's warnings to leave the poor girl alone.

If all the songs were as powerful as these two, Blue Day would have been a soul classic.
at May 15, 2009