A version of this was published in The Santa Fe New Mexican
May 22, 2009 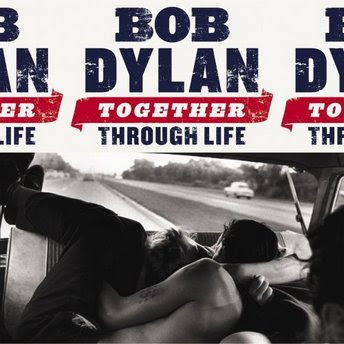 In the twilight of his career, Bob Dylan is still making solid albums that are worth listening to and that spark passionate debate. Most important, as his new one, Together Through Life shows, it’s music worth debating.
It’s not his best album. Far from it.
Dylan’s throat is getting so froggy he’s starting to make Tom Waits sound like Beverly Sills (as if anyone ever listened to Dylan for his vocal abilities). Just to use examples from his (fairly) recent works, there’s nothing here that’s as deep as his chess game with Sgt. Death on Time Out of Mind, nothing as ominous as “High Water” or as funny as “Poor Boy.” But still, the new album is a sweet, sometimes-funny hobo journey into the hazy mists of American music.
As with his other 21st-century albums — Love & Theft (released on Sept. 11, 2001) and Modern Times (2006) — Dylan presents himself as a bluesman oracle, half Homer, half Howlin‘ Wolf. You can almost picture him as the blind bard in O Brother, Where Art Thou?, using simple tunes to offer otherworldly wisdom, popping up at opportune times on his railroad handcar. Or perhaps the Ancient One in the Doctor Strange comics — if the Ancient One sang in a Tex-Mex band.
Yes, there’s a distinctive Southwestern flavor on this record. Much of the credit for that belongs to Los Lobos’ David Hidalgo, whose accordion colors just about every cut. On the song “This Dream of You,” Hidalgo’s accordion is there, as is a violin that will remind longtime Dylan fans of Scarlet Rivera’s playing on Desire.
Then on “I Feel a Change Comin’ On,” Dylan’s band sounds like Dylan & The Band on Planet Waves, with Hidalgo doing his best Garth Hudson and Mike Campbell (of Tom Petty and the Heartbreakers) doing his best Robbie Robertson.
“I’m listening to Billy Joe Shaver and I’m reading James Joyce,” Dylan sings here. “Some people they tell me I’ve got the blood of the lamb in my voice.” (I love that there’s a national dialogue about whether he’s singing “blood of the lamb” or “blood of the land” here. Either works.)
My favorites on the album are the rocking, blues-based numbers, such as the opening song (“Beyond Here Lies Nothin’ ”), “Jolene” (no, not the Dolly Parton song, though it could be about the same home-wrecking woman), “Shake Mama Shake,“ and “It’s All Good” — though, had God made me the producer of this album, I would have added a screaming sax to this last song.
Some have complained about Dylan lifting way too much from classic blues songs and claiming them as his own. For instance, “Beyond Here Lies Nothin’ ” owes much to Howlin’ Wolf’s “Who’s Been Talkin’,” “If You Ever Go to Houston” is a mutated version of “The Midnight Special,” and “My Wife’s Home Town” is so close to “I Just Want to Make Love for You” that a listener might suspect the bass line is sampled from Willie Dixon himself. This isn’t a new Dylan practice. “Rollin’ and Tumblin’ ” from Modern Times was even more blatant reworking.
I dunno. Maybe Dylan should have shared songwriter credits (and, who knows, perhaps copyright lawyers are poring over these tunes at this very moment). But for good or for ill, this “love and theft” is a time-honored American tradition. Willie Dixon himself, not to mention A.P. Carter, Woody Guthrie, and who knows how many others have been accused of taking hoary old folk melodies and motifs and melding them into their own. Dylan reignites these songs with his own crazy fire.
So here it is 2009. Dylan’s approaching 70. It’s been 40 years since Nashville Skyline and 30 since Slow Train Coming. Those weren’t Dylan’s greatest albums either, but all these years later we still remember them. And I still love “Lay Lady Lay” and “You Gotta Serve Somebody.” And we’re still listening to crusty old Bob. I wonder if we’ll still be doing this in 2019?
* This just in! Dylan, along with Willie Nelson and John Cougar Melencamp are scheduled to appear at the Journal Pavilion Aug. 9. Tickets go on sale May 30 and range from $79.50 to $29.50 (lawn tickets). They will be available at Live Nation. 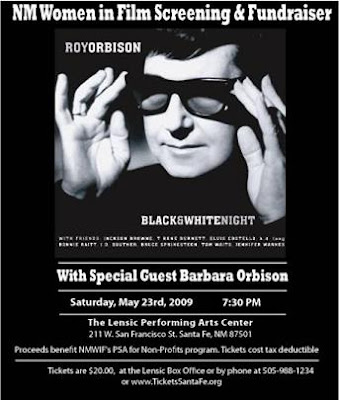 * Roy Orbison lives! Well not really. But sometimes late at night during heartbreak hour, the lonely can hear his voice in the wind ...
And you can see and hear the bard of Wink, Texas, on the big screen when his great 1987 concert A Black and White Night is shown at the Lensic Performing Arts Center on Saturday, May 23. His widow, Barbara Orbison, and “surprise guests” will be on hand to answer questions.
A Black and White Night, originally a Cinemax special on cable TV, featured Orbison with a super band including Bruce Springsteen, Elvis Costello, Tom Waits, and guitar super-stud James Burton. Big names aside though, the star here is Roy himself. He sings his greatest tunes, mainly from the early 1960s, and does justice to each one. Another treat is Orbison’s first recorded performance of “The Comedians,”a Costello song that sounds as if it were written with Orbison in mind.
Not only is the music solid, it’s almost worth the price of admission just to catch a glimpse of Orbison laughing at one of Waits’ bizarre organ solos.
The show was part of a well-planned Orbison comeback campaign that began when weirdo filmmaker David Lynch used Orbison’s “In Dreams” in one of the most intense scenes in Blue Velvet. To this day, I can’t hear the song without hearing Dennis Hopper as thl Frank Booth rasping menacingly, “In dreams I walk with you. In dreams I talk with you.” (In fact, sometimes I hear that when I’m not even listening to the song.)
So there was Blue Velvet, then A Black and White Night, and then Roy joined Bob Dylan, George Harrison, and others in the Traveling Wilburys. And then, in late 1988, at the age of 52, he died.
At the time, I wrote in Pasatiempo, “Roy Orbison is dead and the world is a cheaper and colder place because of it.”
I still believe that. Mercy!