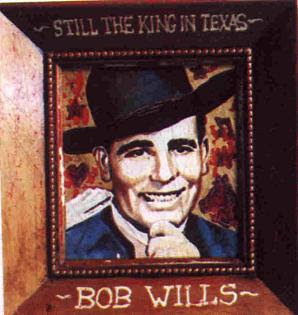 There's a cool little movement afloat in Tulsa, Okla. -- the Bob Wills Revolt.
A Tulsa printer named Lee Roy Chapman says the area of town -- where the famed Cain Ballroom is -- now called The Brady Arts District, should be re-named the Bob Wills District.
The district is named after an early 20th Century civic leader named Tate Brady. According to a story in today's Urban Tulsa Weekly:

Brady--one of the original incorporators of Tulsa after moving here from Missouri in 1890 to open a mercantile store--eventually built the Hotel Brady, a favored gathering spot of oil men and Democratic politicians, according to the state Historical Society. He married a prominent Cherokee woman and later was adopted into the nation, becoming one of its strongest advocates in Washington, D.C.

But Chapman sees a much darker side to Brady's personality, one that isn't often acknowledged in discussions of his role as one of the city's early boosters. Chapman charges that Brady led a land grab in the Greenwood area in the aftermath of the 1921 race riot, supported segregation as a leader of the state Democratic Party during the Constitutional Convention and served as a member of the Ku Klux Klan.

Brady's involvement in the KKK is disputed, the article points out.
The Bob Wills Revolt has a Web site HERE. There;s a Facebook group HERE.

By the way, the article in the Tulsa Urban Weekly is written by Mike Easterling, formerly of The Journal North and the Santa Fe band The Couch Burners.
at June 03, 2009