*I Still Hate CDs by Various Artists. I've already ranted about my problems with eMusic with several tracks on this otherwise terrific Norton compilation. But the good news is that by the end of the week, all the bad tracks had been repaired and eMusic even gave me a fistful of credits for extra tracks to ease some of the angst. So all's well.
Except it still sucks that eMusic is raising its prices. So right now, I still hate eMusic.

But now I want to concentrate on the crazy, joy secret-history-of-rock 'n' roll that this collection represents.
This collection of 45 songs is Norton Records' second installation of 45 rpm singles. I described the first volume as "a grand tour of rock ’n’ roll’s glorious underbelly." That works for the new collection also. There's a smattering of fairly recent material here -- including a new tune from the mighty King Khan (no Shrines, no BBQ), a garage growler called "It's a Lie."
There's a few names you ought to recognize here -- rockabilly royalty Benny Joy and Charlie Feathers, as well as recently-decreased R&B prophets Rudy Ray Moore and Nathaniel Mayer.
But most the tunes are from the '50s and '60s, mainly by groups you've likely never heard of. Unfettered R&B, dangerous rockabilly, surf, garage, some stray doo-wop, punk-rock echoes. It's like the soundtrack of the best teen exploitation B -movie never made.
Some of the same artists from I Hate CDs are represented here. There's Mary Weiss of The Shangri-Las, The Hentchmen of Detroit, The Dictators and The Real Kids. But best of all, there's Andre Williams is back with an old recording of a song called "Daddy Rollin' Stone," backed by a vocal group called The Eldorados and someone playing a nasty guitar hook.
A few of these I had from previous Norton albums -- such as the proto-punk "It's Lame" by Figures of Light," Feathers' "We're Getting Closer to Being Apart" and the notorious (and criminally politically incorrect), "Hello Lucille ... Are You a Lesbian" by T. Valentine
Other favorites so far are "Put De Pot on Mary" by a soul shouter called Poontang Perkins; "Little Girl Gone," which puts the "rage" in garage, by Mogen David Wrath & The Grapes of Wrath; and, best of all, "What a Way to Die" by The Pleasure Seekers, a '60s group that included none other than Suzi Quatro and her sisters. Talk about politically incorrect, this is a joyous ode to teenage sex and drinking! Call the attorney general! What kind of message are we sending to the children?
(For my Tuneup review of I Hate CDs CLICK HERE.) 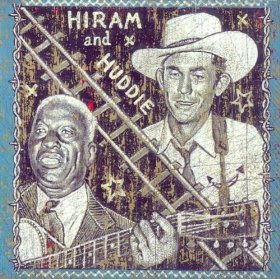 * Hiram & Huddie Vol. 1 and Vol. 2. How could so many of my favorite obscure/unknown primitive blues and country artists be on one collection? This is like some unholy alliance between Voodoo Rhythm (Possessed by Paul James, C.W. Stoneking, Bob Logg III) and Bloodshot Records (Wayne "The Train" Hancock, Scott H. Biram and cover art by none other than Jon Langford.)
But no, this is from a new record company Hillgrass Bluebilly, which hopefully will be conquering the world pretty soon (or have a lot of fun trying.)
This is a double-album tribute to Hank Williams and Leadbelly, performed with plenty of respect if not that much reverence. Liberties are taken, but Hank and Leadbelly are beacons of liberty. There's straightforward honky tonk from Hancock, lo-fi backwoods moans from Possessed by Paul James, crazy stripped down blues stomping from Logg. And Birham's version of "Lost Highway" sounds like a 1950s car radio re-mixed on Jupiter.
A nice surprise for me here was a tune by Flathead -- an Arizona band I interviewed for No Depression about 10 years ago. (Another Bloodshot connection here. They had a song on the great Straight Outta Boone County compilation.) They do a jumping version of "Pick a Bale of Cotton" on the Leadbelly disc. (There's a hidden track on this track -- Wayne Hancock and his wife Gina doing "Goodnight Irene") 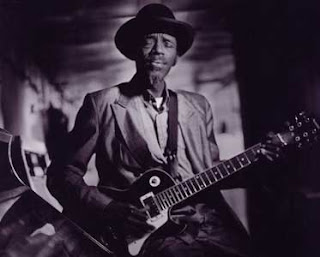 * Stop Arguing Over Me by Paul "Wine" Jones" Remember when Fat Possum was the world's coolest blues label? R.L. Burnside, Junior Kimbrough, T-Model Ford, Paul "Wine" Jones ...
For a few brief moment in the '90s, Fat Possum reminded the world what it was about Mississippi blues we all loved in the first place.
All but T-Model are gone now. Jones was the most recent to pass, dying of cancer at the age of 59 in 2005, not long after Burnside's death.
I was fortunate enough to meet Jones and see him play at a couple of the early Thirsty Ear Festivals. He was a house rocker! 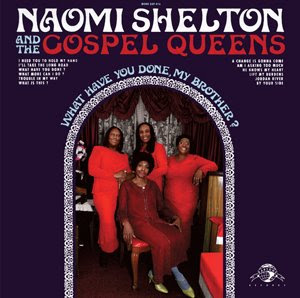 * What Have You Done My Brother? by Naomi Shelton & The Gospel Queens. Here's the latest offering from the glorious Daptone label.

This is a solid gospel record by an Alabama-born singer who has gone back and forth between sanctified songs and secular soul.

Hey, I just reviewed this in Terrell's Tuneup yesterday! Check it HERE 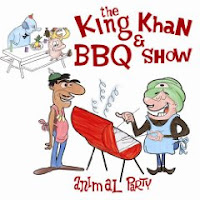 * "Animal Party" b/w "God of Raisins" by The King Khan & BBQ Show. This was released earlier this year by Fat Possum Records as a 7-inch vinyl "single," as us old folks used to call 'em.
This ain't nothin' but good double-sided insanity from my favorite Canadian blues/do-wop/trash duo.
* A bunch of tracks from Cool Cats. This is a compilation of unknown rockabillies -- you ever heard of Johnny Jay, Jimmy Edwards or Curly Coldiron? Me neither. But this stuff is tough. Lo-fi, but the sound is true. My favorite so far is Danny Verne's "Red Hot Car." I'll be getting the rest of these tracks next month for sure.
* "The Big Enchilada" by Bud Kurtz. I discovered this the day after posting my latest podcast of the same name. The music sounds more fake-Cajun than fake Mexican. But I can't help liking a song that starts out, "She's my sopapilla ..."
at June 06, 2009