While looking for alternatives to eMusic (in anticipation of their price increase I recently ranted about), I stumbled across a cool service called Amie Street.

Here's a list of good things about the service, followed by a list of drawbacks, followed by thumbnail reviews of some cool stuff I've bought from Amie Street in the last couple of weeks.
The Good:
* Bargains galore. The four albums, one EP and three stray tracks you see below cost me a total 0f $5.99. One of the albums, the one by J.P. McDermott & Western Bop was free. The tracks are priced according to popularity, which means the more obscure stuff is cheaper. Some of the music I've downloaded has gone up slightly in price, but only slightly.
* Some cool indie labels. I was very happy to see Voodoo Rhythm and Matador on Amie Street, not to mention Daptone, Bomp!, Fat Possum and Yep Roc. I don't think any of these offer their complete catalogues, but among them there's plenty of good stuff I don't already have.
*Easy payment plan. I found it very convenient that Amie Street allows you to pay through your Amazon.com account, so you don't even have to give Amie Street your credit card number. The minimum credit card charge is $3, which means after the $5.99 I spent, I still have a penny in credit at Amie Street. (It will be spent before long.)
The Drawbacks:
* Limited selection: While the above-named labels are great, the truth is Amie Street just doen't have as much as eMusic.
* The price of some tracks: Because of the pricing structure, the better known music can go up to 98 cents, same as iTunes or Amazon. (Message here, get stuff like Sonic Youth and Dirty Projectors quick when it first comes out.)
* Not that well known: You have to explain to your friends that Amie Street is not a contemporary gospel singer.
Oh well, here's what I got for my $5.99 on Amie Street. 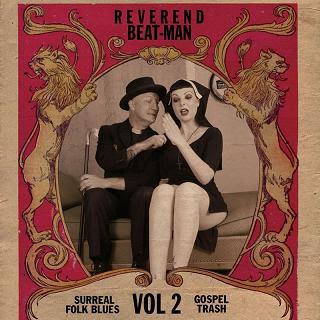 * Surreal Folk Blues Gospel Trash Vol. 2 by Reverend Beat-Man. Getting fired up for Beat-Man's Santa Fe appearance with this accurately named collection of twisted roots rock, religious delusions and demonic tomfoolery.
Beat-Man's raucous guns a-blazin' take on Bill Monroe's "Blue Moon of Kentucky" should not be missed.
One of the coolest rockers here is the opening cut "Letter to Myself," which sounds a lot like Beat-Man's old group The Monsters. He actually did a radically different version of this song a few years ago with his Kraut rock experiment Rev. Beat-Man & The Church of Herpes.
Like Vol 1., this album ends with a crazed, profane seven-minute sermon. Like "The Beat-Man Way" on the first record "Swiss Army Knife" is a window to the soul of the founder of Voodoo Rhythm.
By the way, Vol. 1 is available on eMusic but not Amie Street. Vol. 2 is not available on eMusic. I wonder if they did this on purpose. 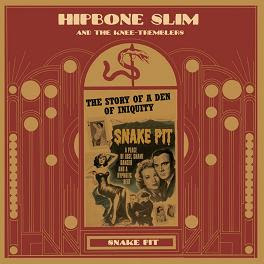 * Snake Pit by Hipbone Slim & The Knee-Tremblers. Like I said, I was happy to see Voodoo Rhythm on Amie Street. Here's another standby of that label.
This is a British pyschobilly unit led by one Sir Bald Diddley. (I guess he's called "Hipbone Slim" as well.)
This is a fine album without a single dud. Only problem is, there's nothing as instantly lovable as "What Do You Look Like" from the other Hipbone album I have, Have Knees, Will Tremble. Of course, that song featured the wonderful Holly Golightly, who tends to make things instantly lovable. 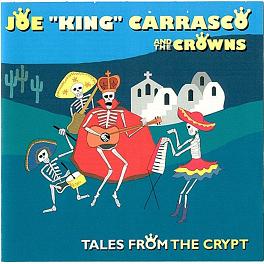 * Tales from the Crypt by Joe "King" Carrasco & The Crowns. The birth of Nuevo Wavo! A loving evocation of Sam the Sham and Doug the Sahm.
Joe and his Crowns recorded this even before the brilliant 1980 "debut" album on Hannibal Records, Joe "King" Carrasco & The Crowns.
Lots of the same songs are there -- "Bueno." "Caca la Vaca," "Federale," "Betty's World," "One More Time," "Let's Get Pretty." To be honest, the later Hannibal versions were a little punchier.
But these versions are bueno. And there's some tunes I'd never hear before such as "Monkey Got My Frisbee."

* Last Fool Here by J.P. McDermott & Western Bop. This one was free and worth every penny.
No, seriously, I enjoy this down-to-Earth rockabilly and back-to-basics honkytonk from this Washington, D.C.-area band. On this record McDermott saved his best for the first. "My Damned Baby" ought to be a rockabilly standard. I also like his country side. "Heartaches for a Time" is a fine cry-in-your-beer two-stepper. 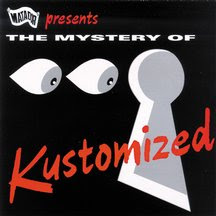 * The Mystery Of... by Kustomized. Attention Mission of Burma fans: Kustomized was a spin-off group led by guitarist/singer Peter Prescott. They don't quite measure up to Mission, but Kustomized came close, carrying on the basic isea of guitar-centric sting.
If you like this EP, Amie Street also has a couple of full-length albums including The Battle for Space, which I've liked for years. I haven't heard At The Vanishing Point yet, but I'm about to download Kustomized's surfy version of the sleaze rock instrumental "Harlem Nocturn."

"How Great Though Art" by Billy Preston, "Pretty Thing" by Canned Heat, and "Love's the Only Thing That's Free" by Carl Perkins, all from a hodge-podge compilation called House of Blues.
at June 22, 2009