TERRELL'S TUNEUP:PATTERSON HOOD FROM the 90s TIL NOW

A version of this was published in The Santa Fe New Mexican
June 26, 2009

Remember those fabulous '90s? Nirvana, the dot-com boom, Monica Lewinsky, Tonya Harding, Kato Kaelin, cell phones as big as walkie-talkies, irrational (or were they?) fears of Y2K, those innocent days when you didn't have to have your shoes X-rayed before you got on a plane ... Yes, those were the daze!

There's definitely a '90s edge to Patterson Hood's new solo album, Murdering Oscar (and other love songs). Listen to the opening guitar riffs on the first track, the title song. If you didn't know better, you might think it's an outtake from some Neil Young & Crazy Horse album somewhere in the period between Ragged Glory and Sleeps With Angels.

There's a reason for that. Most of the 13 songs on the CD were written in the last decade of the last millennium. There's also a cover of an obscure Todd Rundgren song, "The Range War." I'm not sure when that was written.

But once Hood's vocals come in, you might think it's a new album from his regular band, Drive-By Truckers. (Actually, most of the Truckers are playing on the opening song and pop up in various combinations on other songs throughout, especially drummer Brad Morgan and steel guitarist John Neff.) So the origins of Murdering Oscar go back more than 15 years — but the recording of the album actually took place in January 2005. I'm not exactly sure what's behind the four-year delay in releasing it, but I'm glad it's finally here. 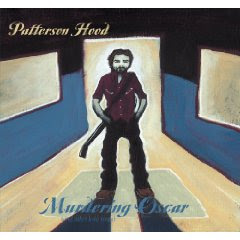 There's a real dark and violent spirit working through many of the album's songs. It starts right on the first tune.

"I killed Oscar, shot him in the head. Put the gun in his mouth, watched his brains fly out/Saw my worries fade as the hole got bigger. Solved all my problems with a trigger."

You never find out exactly what Oscar did to deserve this gruesome fate (except that "he was destroying me").

But Hood wickedly alludes to some New-Age pop psych, declaring "I killed Oscar and I forgave me." It's good to be your own best friend.

Though not overtly violent, "Screwtopia" is even more twisted. It'sabout a man proposing to a woman, apparently the girlfriend of a deceased buddy.

"Buy a house in the burbs, two-car garage, shrubberies, and a birdbath/Keep you safe warm and dry, keep the tears from your eyes/Keep you pregnant all the time. ... Keep you happy and sedated, who needs to be liberated?/ You've got me, you've got me/If you got something in your head that makes you think there's something else/Maybe the doctor can give you something to make you forget."

Is this an invitation to an empty stifling suburban existence? Or is this a deranged lunatic trying to lure some sex slave to be locked, "happy and sedated" in his basement?

And there's even a song about Kurt Cobain on the album. In "Heavy and Hanging," the narrator is an electrician who found Cobain's body on that awful day in April 1994. "On the morning I found you, I was fixing the alarm/Called the papers before 911/Now they're asking me questions 'bout this thing that I found

No, the story here is not all about Cobain. The protagonist has troubles of his own. "Like what to do tomorrow and the day after that/And where I left that ski mask."

The song that follows, "Walking Around Sense," could almost be about Cobain's infamous Mrs., Courtney Love.

"They caught your mama underneath the Jaguar/She was acting so mad, I never seen her so sad/I told her that I'd try to help her get treatment. ... Met her at the rock-and-roll induction/Liposuction/Another shot of headlines."

Not all the songs are so violent or tragic. One of the newer songs, "Granddaddy," inspired by the birth of Hood's daughter, is basically his "When I'm 64." With a sweet folky melody, Hood earnestly sings, "Someday when I'm a granddaddy/Be as sweet as pumpkin pie, just wait and see/We'll hide chocolate candy all around the house/So all the little ones will come and see me."

Of course, this is followed by a nasty little rocker, written in 1994, called “Belvedere,” which is a fantasy about picking up and having his way with a long-legged high-school girl.
("It almost didn't even make the record," Hood said in a recent interview in Nashville Scene. "Even though I liked the song a lot, I wasn't really comfortable with what it said and how it said it." Spoken like a true father, whose daughter will be in high school in 10 years or so.)

The best new song here is the wistful "Pride of the Yankees." Yes, it mentions Lou Gehrig, but it's not about baseball. The song deals with the terrible blows to the national soul that occurred starting with that awful day nearly eight years ago.

"Too many firemen and virgins in heaven/It's all been fucked-up since 9/11/ What we're all fighting and what we're defending/One big long story with two different endings today."

Hood wrote this in 2005. And again, he's talking to his daughter when he sings, "Problems so big and you're so tiny today."

Sometimes the album seems kind of long. It's not without some filler. (And the vinyl version apparently has three additional tunes not on the CD.) But generally, Murdering Oscar can stand proudly with some of my favorite DBT albums. 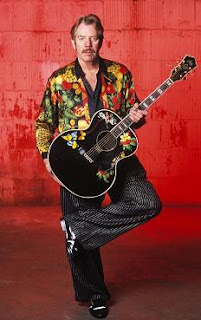 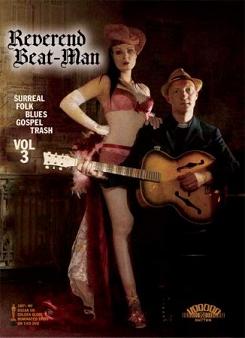 * The Process has announced its venue for the Rev. Beat-Man Trio on Monday July 13.
It'll be at Corazon on Guadalupe & Montezuma Street. Don't miss the Dark Prince of Voodoo Rhythm. Opening is Sean Healen's Goth Brüks.
at June 26, 2009