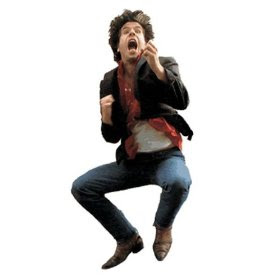 It's true. Mojo Nixon, singer of "Elvis is Everywhere" and father of Debbie Gibson's two-headed love child is offering free downloads of all his albums, plus a few scattered "singles" on Amazon.com.
Put a Louisiana Liplock on that!
Nixon explained in a press release I've seen on a couple of places on the Web:

"Can't wait for Washington to fix the economy. We must take bold action now. If I make the new album free and my entire catalog free it will stimulate the economy. It might even over-stimulate the economy. History has shown than when people listen to my music, money tends to flow to bartenders, race tracks, late night greasy spoons, bail bondsman, go kart tracks, tractor pulls, football games, peep shows and several black market vices. My music causes itches that it usually takes some money to scratch."

Among the weird treasures here are two Nixon songs recorded with The World Famous Bluejays for the Rig Rock Truckstop compilation -- a cover of Roger Miller's "Chug a Lug" and "UFOs, Big Rigs and BBQ."
Unfortunately, The Pleasure Barons album, Live in Las Vegas, which features Mojo, Dave Alvin and Country Dick Montana, isn't included in the freebies. But, what the heck. Download a bunch of free Mojo and buy the goddamn Pleasure Barons.
Hurry. Apparently this is only good for three weeks.
(Thanks to Chuck, my Washington correspondent, for alerting me to this.)
at October 10, 2009