A version of this was published in The Santa Fe New Mexican
October 24, 2009

I wouldn't call Squirrel Nut Zippers' new album, Lost at Sea, the comeback of the year. But the CD, released next week, is a fun little reminder of a fun little band that came along during a strange period of rock 'n' roll. 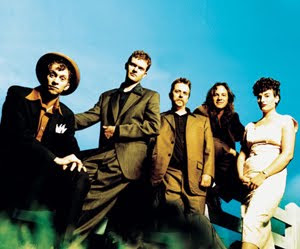 In 1997, when SNZ released their biggest album, Hot, grunge was long dead. Lollapalooza, in its original incarnation as a traveling festival, had run its course. Rock 'n' roll was looking for something new by looking at its roots. Alt country was at its peak. Fat Possum was finding booze-soaked blues codgers in the Mississippi hills.

And then there was the "neo-swing" movement, propelled partly by the 1996 movie Swingers. The Zippers got lumped in with this style, which seemed like a weird fad from day one. I'm not knocking the neo-swingers. I actually liked a lot of that music. As I've mentioned here before, I had fun seeing Big Bad Voodoo Daddy a few months ago, and I enjoy the group's latest album, How Big Can You Get?, a Cab Calloway tribute.

But Squirrel Nut Zippers, fronted by Katherine Whalen and Jimbo Mathus, weren't truly part of the martini-sippin', jitterbuggin', zoot-suit set. True, they were retro; and true, they had horns. But while the neo-swingers emulated Louis Jordan, Louis Prima, and the jump blues bands of the '40s (with obvious nods to Rat Pack cool), the Zippers harked back to an earlier era — vaudeville and hot jazz, with a little Gypsy jazz mixed in. Give Dan Hicks a couple of horns and a speed-freak drummer, and The Hot Licks would sound a lot like the Squirrel Nuts.

SNZ are best remembered for "Hell," basically an original calypso song about the afterlife, and "Put a Lid on It", which was more typical of their sound (and ended up in an Intel commercial). Both are from the Hot album.

The Zippers barely made it to this century. Their last studio album, Bedlam Ballroom, was released in the fall of 2000 but was promptly forgotten. (In fact, I'd forgotten I'd reviewed the dang thing — unfavorably— until I was recently looking through The New Mexican archives.)

But my perennial favorite is the underrated Perennial Favorites from 1998. On some songs there, SNZ seem to be looking at the music industry — which would soon be forsaking them — with horror and bile. There are still fun moments, but that album has a raw and restless undertow. (It is ironic that "Suits Are Picking Up the Bill" ended up on a Heinz ketchup commercial. Guess the suits picked up a few of the Zippers' bills for a while after that.)

A bunch of the original members of the Zippers are back. Besides Whalen and Mathus (who has since worked with Buddy Guy), there are drummer Chris Phillips (who's been playing with the likes of The Dickies and Dex Romweber), trumpet man Je Widenhouse, and bass player Stuart Cole.

The Zippers wisely included several Perennial Favorites tunes — "Suits," "Fat Cats Keep Getting Fatter," and "The Ghost of Stephen Foster" on the new live album, as well as the obvious crowd-pleasers "Hell" and "Put a Lid on It." Other highlights here include "You Are My Radio," which never appeared on any Zippers album before. It features just Mathus on guitar, with a vocal duet by him and Whalen. That's followed by a dreamy "Blue Angel" (no, not the Hundred Year Flood song).

Lost at Sea is a stopgap album. The Zippers are working on a new studio album for release next year. This record proves they've got their instrumental and vocal chops down. Let's hope their songwriting still has some of the bite of Perennial Favorites.

Wally! by The Polkaholics. At first listen, it's tempting to call The Polkaholics "irreverent." After all, here's this crazed trio playing polka on electric instruments — no accordion, no sax, but a screaming guitar with bass and drums cranking up the basic polka beat. The band calls its sound "Oom pah pow!" One of the group's early songs declares The Polkaholics "Polka Enemy Number One." Another tune is called "The Pimps of Polka."

But nothing could be further from the truth than to say they're irreverent. When they sing of "Beer, Broads, and Brats," they're not poking fun at the polka lifestyle. They're embracing it and slobbering all over it. 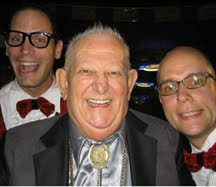 Just look at their relationship to Wally Jagiello, better known as Li'l Wally, who is the subject of The Polkaholics' polka rock opera, Wally! Jagiello was a polka giant who died in 2006 at the age of 76. Don Hedeker, the high potentate of The Polkaholics, calls him "the Muddy Waters of polka." Born in Chicago, Jagiello was the son of Polish immigrants. He's credited with playing a slower and more accessible polka style. That's slower compared to the Slovenian-style polka played by Frankie Yankovic in Cleveland. (Would that make Frankie the Howlin' Wolf of polka?)

Wally! contains several musical references to the first-generation rock operas Tommy and Jesus Christ Superstar. (Check out the song "Polka Superstar," with the lyrics "Li'l Wally, superstar/You are just who you say you are.") The songs tell stories from various phases of Wally's life — his childhood; playing polka in the bars back in the glory days (my favorite song here is "Division Street" — the Chicago street was full of polka dance bars and was known as the "Polish Broadway" in the 1950s); moving to Miami; coming back to Chicago in the early part of this century for a Division Street concert with a new generation of polka nuts (namely The Polkaholics); and his death in 2006 ("Oh how we cried and cried, the day the polka died.").

Li'l Wally wasn't only the king of polka. The Polkaholics declare him "the King of Happiness. Like all Polkaholics albums, this one's fun and zany — and it rocks like crazy.
at October 23, 2009