TERRELL'S TUNEUP: THE DIN OF THE TIN

A version of this was published in The Santa Fe New Mexican
December 4, 2009

It’s strange that one of the most exciting, innovative, and all-around crazy albums released this year was recorded in the late ’70s.
I’m talking about the “new” CD Before Obscurity: The Bushflow Tapes by the long-defunct Akron, Ohio, band Tin Huey. 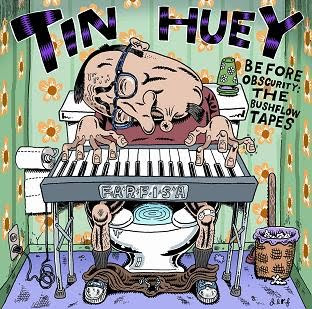 Tin Huey rose from the same weird Midwestern creative ether as its homeboys Devo and Pere Ubu from nearby Cleveland.
Some people will be drawn to this record — consisting of previously unreleased live recordings and Huey rarities — because it features early work by sax maniac Ralph Carney, who has blown on some of Tom Waits’ finest albums along with guest shots with The B-52s, Ubu, Elvis Costello, The Black Keys, and many others. (Recently he’s been touring with They Might Be Giants.) Though best known for sax, Carney also plays clarinet, flute, guitar, harmonica, keyboards, Jew’s harp, and who knows what else.
Tip your Waitress: But it wasn’t Carney who first attracted me to Tin Huey. It was Huey singer/guitarist/Chris Butler and Huey’s connection with another Ohio band — The Waitresses. Butler was basically the brains behind The Waitresses, a band that rose to a short but well-deserved glory in the great New Wave scare of the early ’80s.
Fronted by singer Patty Donahue, whose hilariously whiny, disengaged-punk-chick, proto-Valley Girl voice epitomized the music of that era, The Waitresses actually had a hit with a song called “I Know What Boys Like,” which you can find on just about any Best of New Wave compilation in bargain bins across this great land. Butler wrote or co-wrote virtually every song Donahue ever sang with the group. 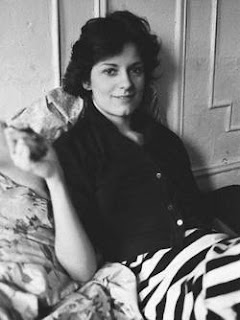 Some have dismissed The Waitresses as a one-hit-wonder or an ’80s novelty band. But if you ever saw them live (I did, at Perkins’ Palace in Pasadena in May 1982) or listened to their albums, you know that their music was strange and deceptively complex. There was a definite Zappa/Beefheart influence, as was the case with Tin Huey. The Waitresses had a sax player named Mars Williams who was a crazy performer — though, recently re-rereading the liner notes of The Best of The Waitresses CD, I realized that Carney, not Williams, played sax on “I Know What Boys Like” and sax and harmonica on my personal favorite Waitresses tune, “No Guilt.”
The first song on Before Obscurity is an early version of “Heat Night,” which would appear on The Waitresses’ first album, Wasn’t Tomorrow Wonderful. But even better for Waitresses’ fans is “The Comb.” It’s a live performance featuring Donahue on lead vocals. Butler considers this to be the birth of The Waitresses — it was the first time he and Donahue performed together in public. For devotees of Donahue, who died of lung cancer in 1996, this alone will make Before Obscurity mandatory listening. It’s a sweet reminder of her cool persona.
But wait, there’s more: Even without the Waitresses connection, there’s lots to love about Before Obscurity. I already mentioned the debt to Zappa and Beefheart and common cultural roots with Devo and Pere Ubu.
There’s some obvious proto-punk influence, most apparent in the group’s cover of The Stooges’ “I Wanna Be Your Dog” (which must have been recorded on or around April 21, as they begin the track singing “Happy Birthday” to Iggy). You can also hear some Velvet Underground, and there’s probably a Television influence, especially on the song “Return Engagement.” (I thought I heard a little Mission of Burma here, but that’s not likely, because that band from Boston didn’t release its first recording until 1981. Must have been something in the air.)
Even though Huey was obscure, I wouldn’t be surprised if some musical acts that came later were hip to the group. Listen to Mr. Bungle, for instance, and you might hear echoes of Tin Huey. A few nights ago, when the Huey tune “Remi” came up on random shuffle mode on my iTunes, at first I thought it was Primus — but with an arrangement by Tom Waits. (This track is actually credited to “Ralph Carney & Friends,” with an explanation that the friends include “one or more Hueys.”)
“Pink Berets” is a dated political spoof about letting women into the military (there’s a reference to the ERA. Don’t know what that was, kids? Look it up!). The punch line is, “Now I’m a boy in the USO.” (I prefer the spoof from the early '90s by Santa Fe's Jim Terr: "The Ballad of the Queen Berets.")
Here’s a disclaimer for the last four tracks on the album: they are best listened to if you’re a longtime fan, musicologist, or flirting with unconsciousness. (I wonder how many people fall into all three categories.) These are lo-fi live recordings of the band, apparently without Butler or Carney. Though not truly representative of Tin Huey’s sound, it’s good rocking fun.
Free Huey: Do check out the band's Web site. There you’ll find a free MP3 of a cover of Talking Heads’ “Don’t Worry About the Government.”
at December 03, 2009