Back From the Shadows Again by Firesign Theatre
OPENING THEME: Buckaroo by Buck Owens & The Buckaroos
Who Put the Turtle in Myrtle's Girdle? by The Western Melody Makers
Bright Lights & Blonde Haired Women by Ray Price
A: Enlightenment B: Endarkenment (Hint: There is No C) by Ray Wylie Hubbard
Bloody Bill Anderson by South Memphis String Band
Let it Roll by Luther Dickinson & The Sons of Mudboy
Duck for the Oysters by Malcom McLaren
It Pays to Advertise by The Farmer Boys
Tequila Sheila by Bobby Bare

Green Tree Boogie by Bill Haley & The Saddlemen
I Didn't Mean to Be Mean by Ray Campi
Lord, Mr. Ford by Jerry Reed
Hayride Boogie by Tillman Franks with Webb Pierce
Voodoo Queen Marie by The Du-Tells
Coyote by The Bootleg Prophets
Creole Boy With a Spanish Guitar by Nancy Apple
Train of Life by Roger Miller
Love-a-Rama by Southern Culture on the Skids 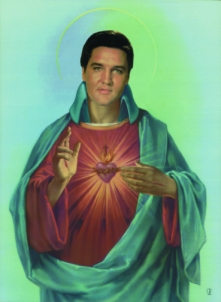 A TRIBUTE TO ELVIS
(All songs by Elvis Presley unless otherwise noted)
King of the Whole Wide World
Big Train from Memphis by John Fogerty
Heartbreak Hotel by The Cramps
Reconsider Baby
Este Bien, Mamacita by El-Vez
Crying in the Chapel
Jailhouse Rock by Jerry Lee Lewis
My Boy Elvis by Janis Martin
Tiger Man
Rockabilly Rebel by Orion
One Night of Sin

The Birth of Rock n' Roll by Class of 55
Everybody's Getting Paid But Me by Rev. Peyton's Big Damn Band
I Ain't Always Lived This Way by Jacques & The Shakey Boys
Evil On Your Mind by Jan Howard
We Three (My Shadow, My Echo and Me) by Wayne Hancock
I'm Here to Get My Baby Out of Jail by The Everly Brothers
CLOSING THEME: Comin' Down by The Meat Puppets

Steve Terrell is proud to report to the monthly Freeform American Roots Radio list
Comical Correction: This post initially said that "Jailhouse Rock" was done by "Jerry Lewis." Actually it was The Killer, not the Nutty Professor.
at January 08, 2010