A version of this was published in The Santa Fe New Mexican
January 29, 2010 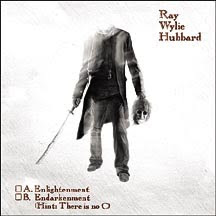 It might be a saloon or an Old West opium den. It’s dark and dusty, in the middle of nowhere. Half John Ford, half Eugene O’Neill. The grizzled singer seems to be channeling something from beyond. He stomps his foot and it sounds like a bass drum. Sometimes there’s a tambourine that sounds like a rattlesnake. The small crowd nods appreciatively at the slide licks and the singer’s metaphysical in-jokes, but they don’t look up from their tables. Half of them have halos; the other half, horns. Most are wearing Day of the Dead masks.
There are crows on the chimney, a wasp nest on the back porch, and tornadoes in the air, about to touch ground. Close your eyes when you listen to the new album by Ray Wylie Hubbard and you might envision similar scenes.
A. Enlightenment, B. Endarkenment (Hint: There Is No C) is a rather unwieldy title. And that’s the only bad thing I’m going to say about the album. A couple of weeks ago on my radio show I said this might be the first great record of the decade. I’m still feeling that way.
Like the son of the redneck mother he wrote about so many years ago, Hubbard was born in Oklahoma 63 years ago. He moved to Dallas with his family as a child, where he befriended former New Mexico resident Michael Martin Murphey. The two were in a folk group for awhile.
With his band The Cowboy Twinkies, Hubbard was part of Austin’s great cosmic cowboy scare of the mid ’70s, along with Jerry Jeff Walker, Gary P. Nunn, Rusty Wier, Greasy Wheels, and Frida & The Firedogs (not to mention Willie and Waylon and the boys). And for a while, he lived in Red River, New Mexico.

But unlike his fellow cosmic cowboys of the ’70s, Hubbard stayed cosmic. Since the ’90s (like many self-respecting artists from the old days, Hubbard sat out most of the ’80s, at least as far as recording goes), his best material has been concerned with the wrath of God and the temptations of the devil, of earthly delights and heavenly light. And it’s mostly done with wry humor. One of my favorite Hubbard songs is “Conversation With the Devil” from 1999’s Crusades of the Restless Knights, in which he confesses that he preferred Satan’s fiddle solo in “The Devil Went Down to Georgia.”
As with other recent Hubbard efforts — Growl (2003) and Snake Farm (2006) immediately come to mind — Enlightenment features a minimalist blues-y sound. There are lots of slide guitar, fierce but simple drums, and lyrics concerning sin and salvation — but little else. Some songs have echoes of bluegrass, with mandolin, banjo, and fiddle occasionally emerging from the primordial blues bog.

Then there’s “Whoop and Holler,” which seems as if it sprang from some old Alan Lomax field recording of a backwoods gospel choir. Except for one tom drum, it’s a cappella, Hubbard and a small vocal group singing about rising up with angel wings. Perhaps it’s significant that the very next song is called “Black Wings” (“Fly away on them old wings, black as they may be.”).

Both the sacred and the sinful are well represented here. “Drunken Poet’s Dream” is about a woman who “likes being naked and gazed upon.” And “Opium” could almost have been co-written by Junior Kimbrough and William Burroughs, though it also reminds me of Steve Earle’s stark “Cocaine Cannot Kill My Pain.” Hubbard knows a little bit about addiction. He sank into alcoholism for years but eventually crawled out of that hole in the late ’80s with the help of none other than Stevie Ray Vaughan.

“Wasp’s Nest” is a slow, menacing blues (“If a wasp is to sting you, it burns like a righteous hell fire,” Hubbard raps). One of the few fast ones is “Every Day Is the Day of the Dead.” It’s a primitive, lo-fi damaged blues cruncher. Not all the songs are about heavenly light or hellish darkness. “Pots and Pans” is about the simple joys of making music. Hubbard’s teenage son Lucas joins him here (and on “Wasp’s Nest”) on electric guitar. “My boy’s got an old guitar, my boy’s got an old guitar and he loves to bend them strings,” Hubbard sings with pride. I remember being at Threadgill’s restaurant in Austin a couple of years ago when Hubbard and son — wearing a Roky Erickson T-shirt — played an impromptu set of blues tunes. Young Lucas has improved since then.

The album ends with “The Four Horsemen of the Apocalypse,” a mournful fiddle and banjo tune about “the great tribulation” with lyrics ripped straight out of the Book of Revelation. David Eugene Edwards of 16 Horsepower would have given his left testicle to have written this one.

But even when he’s relating prophecies about the moon turning to blood, there’s still a twinkle in the eye of the old Cowboy Twinkie. If there is a heaven, Ray Wylie Hubbard’s on the jukebox.

Check out this good 2006 NPR interview with Mr. Hubbard HERE.