A version of this was published in The Santa Fe New Mexican
January 8, 2010 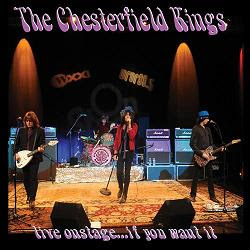 Most rock ’n’ roll bands that model themselves after the Rolling Stones try to be subtle about it. Not The Chesterfield Kings. They’ve always been blatantly proud of it — and never more so than on their new CD/DVD Live Onstage ... If You Want It.
The title alludes to the Stones’ first live album — Got Live If You Want It! The Kings are introduced as “the second-greatest rock ’n’ roll band in the world.” Singer Greg Prevost prances around like Jagger and bassist Andy Babiuk even looks like Brian Jones. And most obvious of all, listen to the guitar hook of “Flashback.” Remind you of a certain Jumping Jack?
So dock them points for originality. But still, you’d have to have a heart of stone (dang, it’s contagious!) not to get a jolt from the rockin’ fun these guys bring. Just like the old slogan of the lethal product from which they got their name, they satisfy.
The Kings, from Rochester, New York, have been around since the late ’70s and releasing records since the early ’80s. Along with groups like The Fuzztones and The Fleshtones, The Kings were leaders of a garage-rock revival in that era.
In the mid part of the past decade, the band came under the sway of a certain mobster named Silvio Dante (a little in-joke for fans of The Sopranos) aka Little Steven Van Zandt, who made them a flagship band of his label, Wicked Cool.
This album, recorded live at a Rochester television studio, includes material going back at least as far as The Chesterfields’ 1994 album Let’s Go Get Stoned — which is cool, because so much of their older material is hard to find. (Some of the earlier albums have apparently never been released on CD.)
Some of the highlights of the show are “Johnny Volume,” in which guest sax-man Chris Wicks wails like Bobby Keys in his prime; “I Walk in Darkness” — a pure ’60s garage-rock thriller with its Farfisa (or at least Farfisa-sounding) organ (by guest keyboardist Paul Nunes) and Yardbirdsian harmonica (by Prevost); “I’m So Confused, Baby” — Nunes’ organ riff sounding like it’s borrowed from “I’m Not Your Stepping Stone”; and “Transparent Life,” which reminds me of “Paint it Black.”
While the basic sound of The Chesterfield Kings is right out of the ’60s, part of this album is a journey into the ’90s. I’m referring to an “unplugged” four-song segment. The Chesterfields go “country” on Merle Haggard’s “Sing Me Back Home” (which they first recorded for Let’s Go Get Stoned). But the best tune from this part of the show is the country-bluesish “Drunkhouse,” which sounds like some long-lost Beggars Banquet outtake.
Speaking of going country, the first verse of “Stayed Too Long” starts out as if it’s going to be a rocked-up version of the Louvin Brothers’ “The Christian Life,” the opening line being “My friends tell me that I should have waited.” It soon veers into another direction, however.
One small quibble: recording this performance at a TV studio probably ensured good sound quality. But I bet The Chesterfield Kings would sound twice as crazy before a hopped-up nightclub crowd where people aren’t sitting politely in chairs.
More goodies from the garage 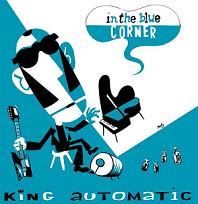 * In the Blue Corner by King Automatic. He’s a one-man garage band from Nancy, France, playing guitar, keyboards, harmonica, and drums and melding them all together through the magic of tape loops. It’s high tech and primitive at the same time.
On Automatic’s previous album, I Walk My Murderous Intentions Home, he displayed a knack for garage noir. He carries that even further on the new record, On Blue Corner, his second release on Voodoo Rhythm Records. KA expands his sound, showing more influence from blues, sinister jazz, and Jamaican rock-steady.
A couple of my favorites here are “Doctor Jekyll & Sister Hyde,” which suggests blues from some dark alley with a piano riff lifted from “In-A-Gadda-Da-Vida,” and “Things Are What They Are but Never What They Seem,” which has a melody that might have been inspired by an all-night binge while listening to Tom Waits albums — though it sounds like Jerry Lee Lewis is playing piano.
“Let’s Have a Party” could be Martians playing rockabilly, while “Le Redresseur de Torts,” with its thumping bass and drums answered by harmonica honks, might be described as a brontosaurus blues. Then there’s “Mood Swings” — with its slinky, sleazy organ and faux Jamaican-rhythm guitar, it could almost be a scene from a movie in which something’s about to go terribly wrong in a cocktail lounge. 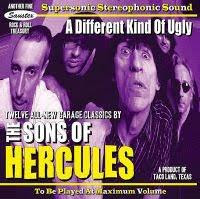 *A Different Kind of Ugly by The Sons of Hercules. Here’s Texas’ answer to The Chesterfield Kings. They might be from San Antonio, but the Sons are far more influenced by The New York Dolls, The Stooges, and other proto-punks than they are by Doug Sahm.
Singer Frank Pugliese belts ’em out like a world-weary pro wrestler taunting an opponent. He’s already won a place in punk-rock history. His 1978 band The Vamps opened for The Sex Pistols at their San Antonio show.
While offering few revelations, this album is good rocking fun. I love how Dale Hollow’s guitar goes from Chuck Berry to Cheetah Chrome in nothing flat on “Still Waitin’.”
Back from the shadows again: After a two-week holiday break, The Santa Fe Opry returns to KSFR-FM 101.1 at 10 p.m. Friday night. And don’t forget Terrell’s Sound World same time, same channel, Sunday night.
Steve Terrell live: I’m doing an increasingly rare personal musical appearance on Richard Nixon’s birthday with ex-Angry Samoan Gregg Turner and Lenny Hoffman at 7 p.m. on Saturday, Jan. 9, at the Aztec Café (317 Aztec St.). There’s no cover.
at January 07, 2010