A version of this was published in The Santa Fe New Mexican
January 22, 2010 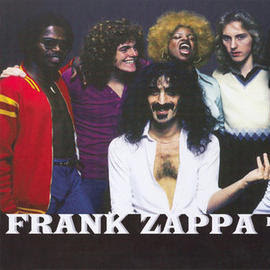 Frank Zappa is alive and well in Philadelphia.
Not literally. But the recently released live double-disc Philly ’76 is like a sweet postcard from the dead for Frank-ophiles everywhere. It’s a dynamic two-hour-plus show with a little-recorded Mothers lineup doing a wide variety of material.
For those who like those lengthy instrumentals in which Zappa draws from jazz and modern classical sounds, there’s a near-19-minute version of “Black Napkins”; and there are lots of his better-known funny songs like “Dinah-Moe Humm,” “Stink Foot,” and “Dirty Love.” Zappa reaches back to his first album, Freak Out! (1966), for “You Didn’t Try to Call Me” and to the groupie suite of Fillmore East: June 1971 for the song “What Kind of Girl Do You Think We Are.” And there is some funk fusion (“City of Tiny Lites”), a cool old R & B cover (The Cadets’ “Stranded in the Jungle”), and a song that later became the basis for U.S. foreign policy (“The Torture Never Stops”).
Material from some of my favorite underappreciated Zappa albums, Chunga’s Revenge (two songs!) and Bongo Fury (ditto), are here.
Zappa plays the hip MC, “a more sinister Dick Clark,” as he says during one spiel. His twisted pseudo-scientific/pseudo-religious “The Poodle Lecture” is classic Zappa humor.
The true star of this album is a singer called Lady Bianca Thornton, billed as Bianca Odin and introduced by Zappa at this show as “the Bionic Woman.” Her résumé includes background vocals with Jon Hendricks, the late disco star Sylvester, Sly Stone, Taj Mahal, and Van Morrison. Before now, the only (legal) Zappa album that featured Odin was You Can’t Do That On Stage Anymore, Vol. 6.
She was only a Mother for a few months. According to Zappa Wiki Jawaka (Wikipedia for Zappa fans), “She quit the band thanks to audience members constantly wanting her to take her clothes off.” Other accounts say she quit because of the crazy Zappa sex lyrics she was supposed to sing. I guess it’s harder than you think to find a woman willing to sing lines like “I get off being juked with a baby octopus and spewed upon with cream corn.”
That’s truly a shame. Her sultry, bluesy interpretation of “What Kind of Girl” is a treat — baby octopus and all. Her soulful rendition of “You Didn’t Try to Call Me” transforms the old doo-wop parody into a thing of beauty. And it gives a new perspective to hear a female sing lead on “Dirty Love” and “Advance Romance.” (“No more credit at the liquor store” is an ominous way to start off any song, no matter who sings it.)
Also standing out on this album is guitarist/singer Ray White, who in 1976 was new to Zappa’s band but stayed until the mid-’80s. White was in the Zappa lineup that played the Paolo Soleri Amphitheater in 1984 — the only time I got to see Zappa live. He especially shines on “City of Tiny Lites,” performed here three years before the song appeared on a Zappa record. White’s scatting and his call-and-response segment with Odin is a real pleasure.
Others shine too. Eddie Jobson’s violin solo on “Black Napkins” stands proud by the work of previous Zappa fiddlers Jean-Luc Ponty and Don “Sugarcane” Harris. And drummer Terry Bozzio — another longtime Zappa player — is, as always, a powerhouse.
This is a warts-and-all recording. You hear Zappa calling to the sound man in “Advance Romance” when the power goes out on Patrick O’Hearn’s bass. I’m glad they didn’t edit it out. It’s almost like being there.

Bonus: Back in 2002 when Rykodisc released Zappa Picks, a couple of “mix tape” collections of Zappa songs compiled by musician fans (one by Larry LaLonde of Primus, the other by Jon Fishman of Phish), I compiled my own “Zappa Picks by Steve Terrell” list. My selections still hold up today. (Though how could I have forgotten "Latex Solar Beef"?) Here’s that list. 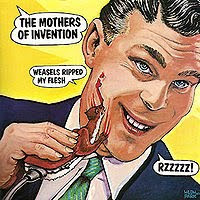 1. “Are You Hung Up” and “Who Needs the Peace Corps” from We’re Only in It for the Money
2. “Inca Roads” from One Size Fits All
3. “WPLJ” from Burnt Weenie Sandwich
4. “Zomby Woof” from Over-Nite Sensation
5. “Harder Than Your Husband” (vocals by the late Jimmy Carl Black) from You Are What You Is
6. “The Mud Shark” from Fillmore East
7. “Advance Romance” from Bongo Fury
8. “Concentration Moon” from We’re Only in It for the Money
9. “Who Are the Brain Police?” from Freak Out!
10. “The Torture Never Stops” from Zoot Allures
11. “Oh No” and “The Orange County Lumber Truck” from Weasels Ripped My Flesh
12. “Later That Night” from Cruising With Ruben & The Jets
13. “Lemme Take You to the Beach” from Studio Tan
14. “Teen-age Prostitute” from Ship Arriving Too Late to Save a Drowning Witch
15. A condensed version of “Porn Wars” from Frank Zappa Meets the Mothers of Prevention
at January 22, 2010