So You Don't Think They Do Anything Worthwhile in Washington, D.C.?

The Library of Congress has just launched what they are calling The National Jukebox, which, as The Washington Post explains "allows listeners to stream a vast archive of more than 10,000 pre-1925 recordings of music, speeches, poetry and comedy. Much of it hasn’t been widely available since WWI."

You can find it HERE.

You can create playlists and share them on Facebook, etc. (I'll take advantage of that when I get off work tonight.)

And here's a tantalizing tidbit: There's actually a disclaimer regarding offensive recordings.


These selections are presented as part of the record of the past. They are historical documents which reflect the attitudes, perspectives, and beliefs of different times. The Library of Congress does not endorse the views expressed in these recordings, which may contain content offensive to users. 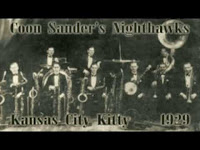 That's probably due to some of the overtly racist songs recorded back in the early part of the past century. However I checked and some of the more offensive tunes, like the ones I wrote about in my music column a few years ago, aren't there. But some others made the cut, such as "Pickaninny Polka" by Charles P. Lowe.

At least they don't have "Kung Fu Fighting"

One little technical glitch: I tried to copy the embed code on a couple of songs to inclunde here, but it wouldn't let me copy. Hope they clear that up. I'm going to have some fun with this.
at May 11, 2011