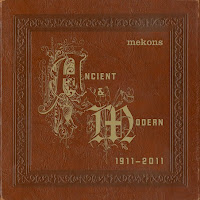 Those lovable Mekons are releasing a new album, Ancient & Modern in late September on their reconstituted label Sin Records.

On Ancient & Modern, Mekons bring you an “album” just like albums used to be; cardboard things filled with cheeky, chunky 78rpm shellac. Just take a look at the cover of Ancient & Modern and you’ll know what we’re talking about! Let the band take you for a walk down memory lane, to the world as it was just before the First World War ... to the Edwardian Era, to the Naughty Naughties a hundred years ago, a cozy nostalgic world: cricket on the village green, punting down the river in a striped blazer and boater, off with the hounds, picnic hampers, community singing, mistresses and wives, mysticism, secret societies, dangerous poetry, radical modern art, Freud, national strikes, revolution, anarchists, bombers, British concentration camps ... oops, is that really a hundred years ago?!? Mekons travel back/forward to a world unaware that it’s waiting for the pistol to CRACK CRACK CRACK in Sarajevo, plotting their singular course through the digital tsunami of contemporary sounds that blare tinnily from your mobile phone or spin at 78rpm in His Master’s Voice from the horn of your exquisite Gramophone.

Despite the talk of 78 shellac, I'm assuming it will be on CD as well. 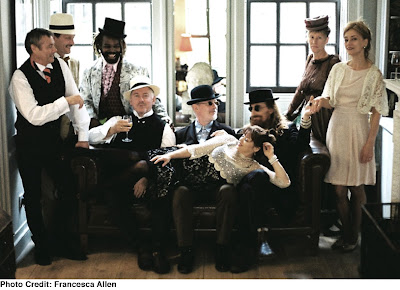