A version of this was published in The Santa Fe New Mexican
July 1, 2011

After a quarter decade, East Coast R & B and soul shouter Barrence Whitfield has reunited with the core of his original band, The Savages, and recorded a mighty new album. It’s called Savage Kings. It’s available in Europe and is scheduled for American release next week on Shake It Records, a Cincinnati label.

Although Whitfield is from Boston and the record was recorded in Cincinnati, there’s a strong New Mexico connection here. Original Savages guitarist Peter Greenberg moved to Taos a couple of years ago.

Greenberg, who once played with Boston garage warriors Lyres (and now plays with Taos band Manby’s Head), instigated the reunion with Whitfield and original bassist Phil Lenker. In fact, their first live gigs together in 25 years or so were last year in Taos, Santa Fe, and Albuquerque.

A history of the Savages, in a nutshell (as related to me in an interview with Whitfield last year): Whitfield was formerly a drummer in a funk band. While working in a record store and studying journalism at Boston University in the early ’80s, he hooked up with Greenberg, who was fresh out of Lyres and looking to start a more R & B oriented band. They recorded a couple of albums together before the original Savages, including Greenberg, began drifting away.

Whitfield pressed on, forming another Savages band and making more albums, including a couple of country-flavored efforts with Tom Russell in the mid-’90s. A confessed vinyl addict, he still works in a record store.

Savage Kings kicks off with “(Your Love Is Like a) Ramblin’ Rose.” No, it’s not the Nat King Cole song or the Grateful Dead’s “Ramble on Rose.” This is an MC5 classic. And Whitfield uses his best falsetto scream to deliver it. It’s followed by a punchy rocker called “Just Moved In” that features a honking sax solo by new Savage Tom Quartulli.

One of the coolest songs here was written by Greenberg and fellow Manby’s Header Mike Mooney. It’s called “Willie Meehan,” and it’s about an old boxer in the early part of the 20th century who actually beat Jack Dempsey a couple of times. Battling Willie, according to the song: “Never did no training / He ate his way to heavyweight.” The opening riffs remind me of The Sonics’ “Strychnine,” which Whitfield also covered a few years ago. Like Meehan himself, this tune is a chunky slugger.

“Shot Down” basically hits that murky borderline between R & B and ’60s garage music. Meanwhile, “Who’s Gonna Rock My Baby,” an obscure old rockabilly tune by Jerry Woodard, sounds as if it were written especially for Whitfield. “Well, I got my call from my draft board today,” the song begins. “Two years might not be that long, but I got to leave my baby at home.”

Whitfield and the band mix things up a bit. The minor-key “You Told a Lie” is basically contemporary blues. You can almost imagine Albert Collins or Robert Cray or maybe even Buddy Guy doing this one. “Bad Girl” is a good old-fashioned riveting soul meltdown; it starts out with a spoken-word introduction and ends with falsetto pleas for mercy.

Since I first listened to this album, my favorite song has been an old Lightnin’ Slim dirty blues classic called “It’s Mighty Crazy.” Captain Beefheart covered this also, at least in his live shows, although he called it “Keep on Rubbing.” (I’ve got it on a live bootleg Beefheart album called Crazy Little Things.) Whitfield’s version is closer to Lightnin’ Slim’s, except he’s got a sax instead of a harmonica.

Whitfield and the boys are touring Europe this fall. I hope the tour is a big success and inspires the Savages to record more. 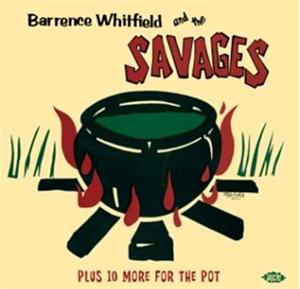 It starts out with “Bip Bop Bip,” a rocker written by soulman Don Covay. It’s got Whitfield’s original version of “Mama Get the Hammer” (the hammer is needed because there’s flies on the baby’s head.”). The song came from a ’50s R & B band, the Bobby Peterson Quintet. But it has become something of a signature tune for Whitfield.

Other must-hears are “Georgia Slop,” a Big Al Dowling tune (written by Jimmy McCracklin), which was later covered by Los Lobos, and “Whistle Bait,” which is a Collins Kids song, originally sung by the pre-teen Larry Collins. Whitfield sings it like an adult — a lust-crazed adult. Greenberg’s big moment here is the breakneck romper “Whiskey Wagon,” a fiery rockabilly slammer. Among the bonus tracks is a nice slow soulful “Pain in My Heart,” a Naomi Neville tune that is best known for the version by Otis Redding. Whitfield fakes crying at the end of the song. Maybe some real tears were shed in that audience.

This CD has only been released in Great Britain by Ace Records. The good news is you can pick it up for a reasonable price at Amazon and other outlets. It’s worth having the CD because of the fine booklet with extensive liner notes by John Swenson and photos. It’s a savage treat.

Here's a Marvel Team-Up for you: Barrence meets King Salami! Live in Norway. (It takes about a minute and a half before the music starts.)