TERRELL'S TUNEUP: On the Case

A version of this was published in The Santa Fe New Mexican
June 3, 2011 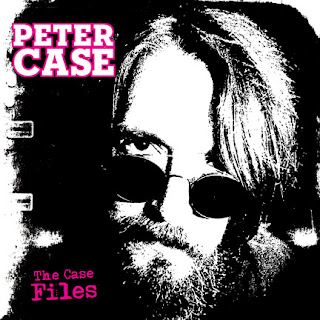 About a year ago, Peter Case released a hard-punching, minimalist, blues-soaked album called Wig!, considered by at least one major Peter Case fan (Steve Terrell) as the singer’s strongest effort in more than a decade. If Wig! had Case fans longing for more, his new album, The Case Files, will satisfy at least some of that hunger.

Subtitled "Demos, Outtakes, One Live Shot & Other Rarities," this compilation reaches all the way back to the 1980s, right after Case’s best-known band The Plimsouls broke up and he began his long haul as a solo singer-songwriter; it includes material from as recent as 2009. “These tracks are some favorites gathered together from tapes in closets, boxes, garages, attics, and suitcases as well as from more recent sessions,” the artist writes in his liner notes.

And if his filing system is a little chaotic, so are the best tracks on the album. As on Wig!, the most powerful songs here are those in which Case’s rock ’n’ roll tendencies overshadow his folk/troubadour sensibilities. Paradoxically, most of these are performed with Case backed by his acoustic guitar and not much else.

Such is the opening cut, a frantic little rocker called “(Give Me) One More Mile,” featuring a nasty guitar hook — that’s Case on 12-string — some desperate-sounding harmonica honking, and bass and drums. I knew it sounded familiar and indeed it was. Though it’s been remastered for Case Files, the same recording appeared on a self-released, limited-distribution 2001 album called Thank You, St. Jude, which consisted mainly of songs from Case’s early solo albums rerecorded with violinist David Perales. “One More Mile” deserves a good revival. It helps set the tone for the rest of the album.

The same rough-hewn blues approach is found on Case’s cover of Kokomo Arnold’s classic “Milk Cow Blues.” Case is playing electric guitar on this live 2005 number, backed only by bass and drums. Also rocking is “Round Trip Stranger Blues,” recorded in 1989 with the late Stephen Bruton playing some piercing electric slide.

Case gets political on a few cuts. With his L.A. pal Stan Ridgway adding some subtle Wall of Voodoo touches, “Let’s Turn This Thing Around” is a good early-21st-century protest song about stolen elections, liberties lost, and economic injustice. Some of the lyrics reappear in “The Ballad of the Minimum Wage,” in which Case speaks rather than sings the lyrics behind an electronic beat while an organ and guitar create sinister disjointed fills.

Recorded at the same time in 2005 is another spoken piece, “Kokomo Prayer Vigil.” The refrain is “America comes in two great flavors of angry voices on the radio/This is Preacher Bob callin’ on election eve/For a prayer night vigil in Kokomo.” He paints a portrait of a country losing its spirit. Case recalls a Border Patrol stop near El Paso when, because of some misunderstanding, an officer aimed a gun at Case’s head. Another verse talks longingly about an anti-war rally in Washington, D.C., that Case attended as a youth. “I was 15 and the world seemed wide compared to what I see here now.”

There are some dandy cover tunes on Case Files. Case does a commendable job on Alejandro Escovedo’s “The End,” which sounds like a slightly shorter version than the one he did on the 2004 Escovedo tribute album Por Vida. Picking up his 12-string again and overdubbing some honky-tonk piano, he does a fine gutbucket take on a Rolling Stones obscurity, “Good Times, Bad Times,” a Wig! outtake. Even more fun is Bob Dylan’s “Black Crow Blues.” Case bangs the piano while his friend Ron Franklin responds on harmonica.

One of the best songs from Case’s first solo album is “Steel Strings.” A demo of that song appears here. I see the Case Files version as an indictment of the 1980s. After hearing the demo, with Case backed by T Bone Burnett on electric guitar and percussion, it’s hard to listen to the original, which was all gussied up with yucky ’80s synths and whatnot by producers Burnett and Mitchell Froom. Yes, back in the Reagan era even scruffy singer-songwriters got glossy overproduction. I’m glad Case made this soulful underproduced version available.

* No One Got Hurt: Bloodshot Records 15th Anniversary @ The Hideout, Chicago. The label that invented “insurgent country” quietly turned 15 years old in September 2009. Well, not really quietly. This album, recorded live at a Chicago club, is a rowdy blast, featuring acts from the current Bloodshot stable as well as some returning veterans.

Moonshine Willy, which was the first band to release a single-act album on Bloodshot, reunited for this show. But an even more impressive homecoming was that of Alejandro Escovedo, who does a scorching “Castanets” and a moving version of “I Was Drunk.”

Newer Bloodshot acts like Deadstring Brothers and The Scotland Yard Gospel Choir do themselves proud (though the former wear their Stones influence a little too obviously and the latter remind me of The Decemberists, which gives me mixed feelings).


But these are no match for one-man wacko Scott H. Biram (especially on his hopped-up “Truckdriver”) or Bloodshot’s flagship band The Waco Brothers, who do rousing versions of “See Willy Fly By” and “Red Brick Wall.” The Wacos also back Mekons squeeze-box man and one-time Bloodshot artist Rico Bell.

It’s a limited-edition album, so hurry to Bloodshot to get yours.

And speaking of Bloodshot compilations, there's a new FREE one over at Amazon.com . It's called Bloodshot Records Spring Cleaning Sampler. It's full of old Bloodshot favorites like Robbie Fulks, Trailer Bride, The Meat Purveyors, former Santa Fe resident Rex Hobart, and of course The Waco Brothers.

Here's a promo video for The Case Files.