A version of this was published in The Santa Fe New Mexican
June 17, 2011

Instead of being mauled by a pack of rabid dogs like they deserve, the two discover a great new taste sensation. 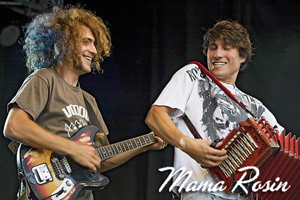 I don’t bring this up to indicate an association with or sponsorship by Reese’s — nor do I intended to disparage the company’s fine products. But when I first saw the new album Louisiana Sun by Mama Rosin and Hipbone Slim & the Knee Tremblers, I thought about that ad.

“Hey! You got your Swiss zydeco in my British neo-rockabilly.”

Indeed, Mama Rosin, named for a classic Cajun tune best known for the version by Zachary Richard, is a three-man group from Geneva that plays a hopped-up, rocked out version of Cajun and zydeco music.

Hipbone Slim, also known as “Sir Bald Diddley,” is a London rockabilly boy. What the two bands have in common, besides their history of appropriating their respective styles of American roots music to their own weird ends, is their affiliation with Voodoo Rhythm Records, which is always keen on subverting roots music just for kicks or thrills.

For the most part, it works. This album was recorded partly in England, partly in Italy, but its heart is in the American South.

There are several tracks that sound more “zydeco” (“Citi Two-Step,” “London Zydeco”) or more “rockabilly” (“Quel Espoir?,” “The Cat Never Sleeps”). My favorite ones are those in which both elements combine into something new and threatening.

Such is the case with the first song, “Voodoo Walking,” described on the album cover as “a classic Charles Sheffield number in a new dress.” Though it’s sung in French by Mama Rosin’s Cyril “Jeter” Yeterian, you can hear the influence of Louisiana R & B shouter Sheffield’s early ’60s regional hit “It’s Your Voodoo Working” as well as the main hook from Howlin’ Wolf’s “Smokestack Lightning.” It’s noirishly swampy, with a spooky melodeon solo by Yeterian.

“Swamp Water” lives up to its name. Hipbone Slim handles the vocals here. There’s strong drumming by Rosin’s Xavier Bray on this percussion-heavy song, while Yeterian’s Cajun licks on the melodeon keeps it right in the bayou.

“Killing Two Birds With One Stone” and “Gettin’ High” have a basic John Lee Hooker stomp-boogie sound, but with zydeco overtones. “Princess Havana” takes a Caribbean detour, while “Trouble Ain’t So Never Far Away,” sung by Hipbone, sounds like a tribute to New Orleans piano-dominated soul ballads.

And then there’s the title song, a re-working of The Rivieras’ “California Sun” (later covered by The Ramones), now a zydeco-drenched, banjo embellished pan-national anthem of summer fun.

I don’t want to get too corny here and babble about how music is the international language or some such hogwash. The main thing on this album is that it sounds like both bands had a lot of fun making it.


* The Chronicles of the Pussywarmers. Last week, reviewing Jimbo Mathus’ new album, Confederate Buddha, I lamented the fact that there’s nothing on the album that sounds anything like the music of Jimbo’s best-known band, the Squirrel Nut Zippers. Just a couple of days after I wrote that, I received this new album by the Pussywarmers, a band led by singer-guitarist Fabio “Pozzo” Pozzorini, from the Italian speaking part of Switzerland. 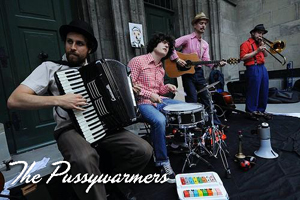 The label touts the group as an “exotica obscura freak show varietease sea cruise orchestra” that plays Weimar Republic-era jazz (the musicians’ lives must be a cabaret, old chum). And it’s true, this band has a distinct Euro vibe.

But I hear a lot of the Zippers’ neo-vaudeville/Dixieland craziness in there, too. In fact the first song, “Me and Me Girl” a jazzy calypso romp, could almost be the sequel to the Zippers’ “Hell.” Further into the album “La nen la Bambele,” with its muted trumpet and bluesy melody sounds like some long-lost Cab Calloway song, kidnapped by Europeans.

Virtually every song here is a mysterious musical adventure. “Chanson d’amour (Ce n’est pas pour moi),” sung in French, reminds me of the music of the band’s Voodoo Rhythm labelmates The Dead Brothers, especially when the song changes into a waltz with a musical saw providing a ghostly response to the guitar and piano solos.

“La marcia dell’amor negato” could almost be a polka. And the near-five-minute “Broken Mirror,” featuring drumming straight out of Burnt Weeny Sandwich/Weasels Ripped My Flesh-era Frank Zappa, reminds me of psychedelic version of Brecht and Weill’s Three Penny Opera.


Two of the three photos used here were stolen from Brother Panti-Christ's Myspace page.
at June 17, 2011