TERRELL'S TUNEUP: Alvin Turns it Up to 11

A version of this was published in The Santa Fe New Mexican
July 15, 2011 As usual with Alvin records, my favorite tunes here are the rowdy rockers. But I have to admit that most of Alvin’s softer, prettier songs are knockouts as well. To use the words he sang about his father a few years ago, Alvin “can swing a sledgehammer or soothe a baby that’s cryin’.”

The title of the album comes from the fact that this is Alvin’s 11th solo album (not including his three live ones), and it was released in 2011. (That kind of begs the question of why he didn’t wait until November to release it.)

In this long-time fan’s view, this one ranks up there with his best.

He effortlessly shifts between a pretty, folkie duet with Christy McWilson on “Manzanita” and a raw song of lust like “Dirty Nightgown” — and it all sounds true.

The album starts off with snarling guitars and stormy drums breaking into a moody boogie called “Harlan County Line,” which has music that reminds me of Canned Heat’s “On the Road Again.” It’s about a lost lover whose memory apparently comes through as the narrator clears his mind one morning with menthol cigarettes.

This leads into a fiery little blues called “Johnny Ace Is Dead,” which deals with the 1954 backstage suicide of R & B singer John Marshall Alexander Jr., aka Johnny Ace. 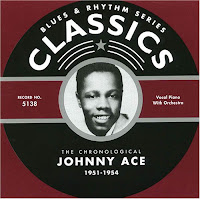 Alvin’s not the first to write a song about this incident, which, according to legend, was a game of Russian roulette gone bad. Released in the early ’80s, Paul Simon’s “The Late Great Johnny Ace” weaves the death of Johnny Ace with the killing of John Lennon into a sad nostalgic tale.

Alvin’s song is more literal. He has Big Mama Thornton — who was on the same bill as Ace that fateful night — telling the doomed singer to quit fooling around with his gun. “He said, ‘Ladies, want to see me play a wild little game?’ / But Big Mama Thornton said ‘Go sing your song / And put that damn thing down before something goes wrong.’ ”

By the next verse, Ace’s record company owner, Don Robey, is already plotting to exploit the death. “I’m gonna send him back to Memphis in a refrigerated truck / Cause Johnny Ace is gonna make me a million bucks.”

Ace is not the only suicide victim Alvin sings about. “Black Rose of Texas” is a somber ode to Amy Farris, the fiddle player in Alvin’s Guilty Women band a few years ago. She killed herself with pills in 2009, about a month after performing with Alvin at the Santa Fe Brewing Company.

Another fallen musical partner of Alvin’s gets a tribute here. “Run Conejo Run” is about Chris Gaffney, who played accordion with Alvin’s Guilty Men before he died of liver cancer in 2008. It’s one of the strongest rockers on this CD, with a punchy Bo Diddley beat. Gaffney sings with Alvin on “Two Lucky Bums,” the last song on the album. It’s a jazzy, mellow acoustic number, with Gaffney’s accordion sounding like a harmony.

There’s at least one song I suspect was inspired by recent headlines. “Gary, Indiana, 1959,” which recalls the glory days of American labor, has to be sparked by the union struggles in Wisconsin, Ohio, and other states this year.

A couple of tunes deal with crime. “Murrietta’s Head” is about a poor guy considering the governor of California’s bounty on celebrated outlaw Joaquin Murrieta back in the Gold Rush era. More contemporary is “No Worries, Mija,” a Mexican-flavored acoustic song in which the narrator assures his lover that everything will be great after he makes some money doing some unspecified “job” across the border. “Yeah, there may be some trouble, honey I won’t lie,” the narrator admits.

For those, like me, who became familiar with Alvin’s music in the early ’80s, when his band The Blasters was making glorious punked-up rockabilly, R & B, and blues, the song “What’s Up With Your Brother” will be a true treat.

This is a duet with Dave Alvin and his brother Phil, the Blasters’ singer — and it’s the first time the Alvin brothers have ever sung together on record. (In the strict division of labor in that band, Dave played guitar and wrote songs but kept his mouth shut.) 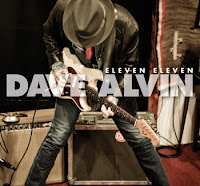 On “What’s Up,” the two poke fun at their sibling rivalry, trading verses complaining that, despite their individual accomplishments, all anyone asks them about is what the other brother is doing. The song ends in a mock spat, acknowledging with a sweet wink the bitter way Dave left the band. A third Blaster is on this song too. Gene Taylor plays piano, as he does on “Gary, Indiana, 1959.”

The spirit of Eleven Eleven is summed up in a plea for sex on the song “Dirty Nightgown.” “Life is beautiful and sad, baby, and you know our time ain’t long / Friends and family pass away and tomorrow we may be gone / So just let your hair down, baby, and put your dirty nightgown on.”
at July 15, 2011