TERRELL'S TUNEUP: Bashing Away at the Blues

A version of this was published in The Santa Fe New Mexican
July 22, 2011

The Romweber kids are back, and they’re bursting with joyful noise. 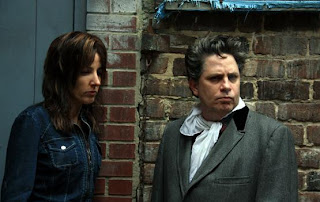 I’m referring to the Dex Romweber Duo — Dex and his sister Sara on drums — and their new album Is That You in the Blue?, which is scheduled for release on Tuesday, July 26. It’s a worthy follow-up to their 2009 album Ruins of Berlin.

A primer for newcomers: Dex Romweber was the frontman for an earlier dynamic duo called Flat Duo Jets. Though the group never got as big as The White Stripes or The Black Keys, FDJ is properly credited for being an important pioneer of the two-person blues-bash sound.

Is That You?, like DRD’s previous album, is a minimalist masterpiece basically consisting of Dex and Sara bashing away, subtly aided by other instruments in certain spots — an organ here, a sax there, stand-up bass here and there. Their North Carolina compatriot Rick Miller of Southern Culture on the Skids helps out on guitar on the opening cut, “Jungle Drums,” while Mary Huff of SCOTS lends some background vocals on “Midnight Sun.”

DRD is the second band I love that has released a version of Billy Boy Arnold’s “Wish You Would” this year. Dex one-ups The Fleshtones by doing two versions of the song here. The first version is the best, but it’s hard to say whether I like that one better than The Fleshtones’ cover. Both bands capture the essence of this blues classic.

“Nowhere” is one of those slow, smoky minor-key songs Dex so loves. He croons the verses and shouts on the choruses. Another one of these is “Midnight Sun,” which is even spookier than “Nowhere.” And speaking of crooning, Dex sings the living bejesus out of the song. He wrote it himself, but it sounds like some powerful pop ballad of the ’50s.

One of the highlights here is DRD’s version of “Brazil,” a song that has been covered by Frank Sinatra, The Coasters, and many in between. Dex adds a “Viva Las Vegas” riff to this jumpy little version. After the first three or four listenings, my favorite tune here is the cover of “Redemption.” This is one of the strange visionary religious songs from the first American Recordings volume. The band speeds it up, with Sara putting some voodoo in her drums.

Dex does a solo acoustic cover of “Homicide,” an obscure rockabilly tune by Myron Lee and the Caddies. It’s not bad, but it could have used a crazy sax like the original version. If that’s the most serious complaint I can find, this has to be a pretty good record. In fact, it’s a mighty fine affair. 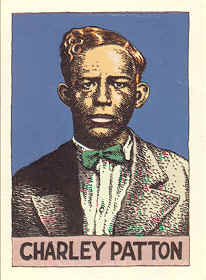 * Peyton on Patton by The Reverend Peyton’s Big Damn Band. Somewhere in the Big Cosmic Blues Afterlife, the angel Charley Patton probably has a chip on his shoulder. “How come that young upstart Robert Johnson gets so much of the credit?” he grumbles to the other blues angels. “I was playing the blues before the devil ever tuned his damned guitar!”

It’s true that Patton has never received nearly as much credit as he deserves as one of the titans of Delta blues.

He was the archetype. Patton was known as a crazy entertainer, tossing his guitar in the air, popping his bass strings like a proto Bootsy Collins, singing about jellyroll one minute and then getting all holy and shouting the gospel the next.

He recorded about 60 songs between 1929 and 1934. And while several compilations of Patton material are available, Allmusic.com gives this depressing disclaimer: “No one will never know what Patton’s Paramount masters really sounded like. When the company went out of business, the metal masters were sold off as scrap, some of it used to line chicken coops. All that’s left are recordings of scratchy 78s.”

But Josh Peyton, known professionally as “The Reverend Peyton,” is out to rescue Patton’s music from the chicken coop. His latest album, just released, is a sweet and powerful tribute to the departed bluesman.

Peyton isn’t from the Delta. He’s from Indiana. But the country blues of Patton and those who followed are the chief driving factor of Peyton’s music.

Some of Patton’s greatest tunes are included here — among them “Mississippi Boweavil Blues,” “Shake It and Break It” (which was recorded by Canned Heat in the early ’70s), “A Spoonful Blues,” and “Tom Rushen Blues.” And there’s not one, not two, but three versions of Patton’s “Some of These Days I’ll Be Gone.” There’s one featuring an acoustic guitar, one with a banjo, and one with a slide guitar. The last is my favorite.

My chief complaint about this album is that I miss the Big Damn Band — Breezy Peyton on washboard and Aaron “Cuz” Persinger on percussion, Though it’s not billed as such, Peyton on Patton is basically a Josh Peyton solo album. Breezy supplies strong call-and-response vocals on “Elder Greene Blues” but you barely hear Persinger. The only drumming he does is slapping a tobacco barrel like bongos with his bare hands. True, most of Patton’s recordings were done solo. But I think the full band, which itself is pretty minimalist, would have added more dimension.

I don’t think Charley would have minded.