A version of this was published in The Santa Fe New Mexican
July 29, 2011

Less than a year after the release of  The Imperial Rooster’s first album, Old Good Poor Crazy Dead, the group crows again with a whole new collection of what it calls “gonzo roots” tunes. 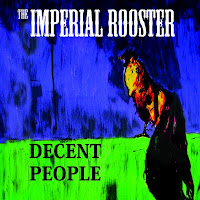 Decent People is the sophomore effort from this ragtag gaggle of Española wackos. But it’s no slump. In fact, without losing the zany appeal and inspired slop of the first album, Decent People displays more depth in writing and performance than its predecessor. It’s bluegrass-informed, jug-band-influenced, and punk-rock in spirit.

I performed with this band in Española earlier this year. The group backed me on a few of my own tacky songs. I didn’t get paid — except for earning bragging rights that I survived a Rooster show at Red’s Steak House.

“DWI Marijuana Blues” probably sends the wrong message to children and other living beings, but if you don’t laugh, well, you probably shouldn’t be listening to an Imperial Rooster album in the first place. “I Like the Way” pays sweet tribute to a foul-mouthed girlfriend who’s not afraid to get into a violent confrontation at a grocery store when someone tries to sell her overpriced chicken. But there’s a dark side seething out some of the songs. “God Has Left the Building” deals with a tragic and violent end of a love. The narrator of this tune chides his woman who “blamed me for my only child’s death.” The refrain goes, “Well the devil ain’t got nothing on all the wrong that I have done / By putting all my faith into you, hon.”

One huge surprise here. I already knew The Imperial Rooster could do raucous. I knew the group can do “rootin’ tootin’, low-falutin’, and salad-shootin’.” But the song “McGinty’s” shows that the band can also do pretty. It’s a slow, sad waltz with a bittersweet melody and strange but beautiful vocal harmonies that remind me of a folk ballad that I can’t put my finger on.

Decent People is currently available only as a digital download. CLICK HERE. However, the band recently conducted a successful Kickstarter campaign to raise money to produce CDs and vinyl versions. So look out.

Here are a few other CDs from local artists I’ve been listening to lately. About halfway through writing this, I realized that Bill Palmer (Stephanie Hatfield & Hot Mess, Hundred Year Flood, etc.) produced, co-produced, and/or recorded all of them, including Decent People. They were recorded mo 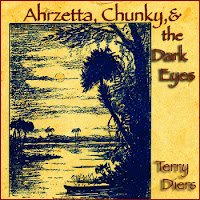 *Ahrzetta, Chunky & the Dark Eyes by Terry Diers. Diers’ Facebook page says he’s originally from Vermont, so one might suspect that his music would be closer to maple syrup than red beans and rice.

But on this album, backed by some of Santa Fe’s finest plus Blues Traveler’s John Popper blowing harp on one track, the overriding sound is New Orleans and Louisiana music. Lots of R & B, some hard Big Easy funk, some touches of Dixieland, even a little swampy country.

And Diers pulls it off. Having heard his music in various settings for nearly 30 years, I can say he’s got one of the most natural blues voices of anyone to ever blow through Santa Fe. I’ve heard him sing blues. I’ve heard him sing soul with a band called Motown Revue and gospel with Bethleham & Eggs. I even remember hearing him play keyboards with a pickup band for Screamin’ Jay Hawkins. So New Orleans isn’t that big of a stretch. .

Some of the tunes here — “Ahrzetta,” “Here’s Johnny,” “Hitch Hooker” — are fairly big productions with full horn sections. Some are simple acoustic blues, such as “Walkin’ Til I Die,” “Chunky,” and the honky-tonk lament “Price of Beer.” 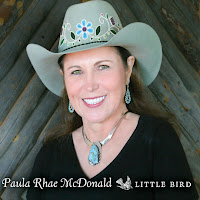 * Little Bird by Paula Rhae McDonald. I first heard McDonald a few weeks ago at Frogfest when she sat in with Bill Hearne’s band. She just tore it up. She has an excellent country voice and stage presence, and I was stunned when she said she’d written the song “Crazy as a June Bug” when she was 11 years old. This is not a kid’s song. It’s a jumping little western-swing tune.

“June Bug” is the opening track on this album, a collection of originals and standards. McDonald does a cool two-stepping version of the Johnny Mercer song “Goody Goody” and turns Buddy Holly’s “True Love Ways” into a honky-tonk weeper.

Besides “June Bug,” my favorite McDonald original is “Snow White Dove,” which reminds me of some lost Tammy Wynette tune. It’s about a lonely woman dreading the hours she spends alone after sending the kids to school. She must have been at least 13 when she wrote this.

* Blues for Too Long by Country Blues Revue. This is an unassuming batch of good-time blues by “Harmonica” Mike Handler (who also sings and plays some guitar) and Marc Malin, who sings and plays guitar, banjo, and slide guitar.) 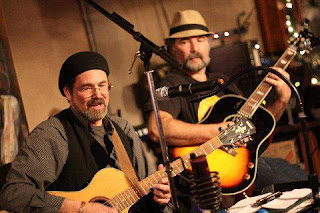 True to its country-blues name, this is mostly an acoustic affair. Vin Kelly plays mandolin and fiddle.

My favorites here include the opening track, “Gamblin’ Wheels,” which is about a poor guy stranded in Las Vegas, Nevada, having spent all his money on “some honey” and, probably, the casinos. And then there’s “Funny Feeling,” which features some New Orleans piano by Brant Leeper.