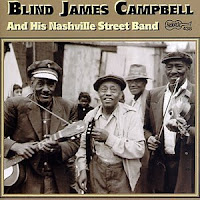 * Blind James Campbell And His Nashville Street Band. Here's another fine Arhoolie recording. Just like the title implies, Campbell and his cohorts played in the streets of Nashville. Much like Howard Armstrong's bands, (I downloaded Louie Bluie, the soundtrack to the wonderful documentary about Armstrong, a few months ago), Campbell played a wide range of music -- blues, country, gospel, jazz, old folk songs).

Campbell, who was left blind after an accident at a fertilizer plant, started the band in 1936. Arhoolie's Chris Strachwitz recorded them in 1962 and '63.

On most songs Campbell, who played guitar, mandolin and percussion, is accompanied by Beauford Clay and Bell Ray on guitar. Some songs feature a two-man horn section (George Bell on trumpet and Ralph Robinson on tuba).

Campbell doesn't have the strong personality of Howard Armstrong, but still, I can't think of a street corner in America that wouldn't be improved by having a band like this.playing on it.

But here's some bad news. It looks like I nabbed this one just in the nick of time. Sometime after I downloaded this a few weeks ago, it disappeared from eMusic. And it's not even available on Amazon. I'm not sure what the story is here. 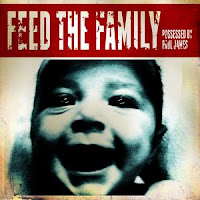 * Feed the Family by Possessed by Paul James. I'm not sure how I missed this album when it was released last year, but I'm glad I found it now. I first became a fan of this one man band (that one man's real name being being Konrad Wert) three years ago when his album, Cold and Blind came out on Voodoo Rhythm.

Wert was born and raised in an Amish-Mennonite family in Immokalee, Florida. “Paul James” is a combination of his father’s and grandfather’s names. He plays plays guitar, banjo, fiddle and percussion. And as I said in my review of that previous album, he "sounds as if he’s emerged from some primordial swamp where every shadow might be a demon. As he shouts and yelps ... you can imagine him as some sinner in the hands of an angry God."

Feed the Family probably is more accessible to a newcomer than his previous work. It's more melodic. There's some downright pretty country songs like "Shoulda Known Better" and "Texas Rose." And then there's, "The Color of My Bloody Nose,"  a nasty little break-up song that shares a special kinship with Harry Nilsson's "You're Breaking My Heart."

Still, my favorites are the stompers, the ones with the most fire and brimstone -- the opening track "Four Men from the Row," which sounds like a banjo apocalypse and the fiddle-driven title song.


For a cool interview with Konrad Wert on Outlaw Radio Chicago CLICK HERE. 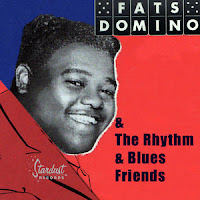 * The 90 (!) or so tracks I didn't get last month from Fats Domino & The Rhythm & Blues Friends. As I noted before, this is a strange compilation featuring a bunch of Domino live tracks plus scores of great old R&B and blues tunes that have no apparent relation with Domino.

The sound quality isn't great on a few tracks here. But for less than a dime a track (if you download the whole collection), this is a true bargain-basement treasure.

And there's some I'd never heard of -- Hop Dixon, Elmo Nixon, H-Bomb Ferguson, The Arabians.

Some standouts here include "Chitlin' Ball" a west-coast jump blues by King Porter; "Everything is Cool" an early rock 'n' roll obscurity by a guy simply known as "Pork Chop"; "My Rough and Ready Man," featuring some sexy scat from Annie Laurie; and "Sad Head Blues" by some sad sack  who went by the name "Mr. Sad Head."

This album provided a couple of selections for my most recent Big Enchilada podcast: "But Officer" by Sonny Knight and "Wine O Wine" by a band called The Gators. 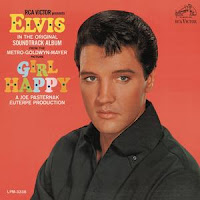 *Six songs from Girl Happy by Elvis Presley. Girl Happy for years has been my favorite guilty-pleasure Elvis movie. But there's nothing to feel guilty about in loving this soundtrack.

A few of these songs -- "Puppet on a String," "Do the Clam" and the title tune --  I already had from the compilation Command Performances, The Essential Sixties Masters. But this is the first time I've had digital copies of under-rated, overlooked songs like "Spring Fever," "Wolf Call" and the dangerously tacky "The Fort Lauderdale Chamber of Commerce." You know a song that starts out "Girls on the beach, they commit a sin/They don't show yards and yards of skin" is going to be a kick. The Cramps did a great version of "Do the Clam," but I'd have loved to have heard Lux Interior croon "Ft. Lauderdale."


* Two songs from The Early Years, 1930-1934, Volume 1 by Cab Calloway. "Happy Feet" and "Aw You Dawg" to be exact (which is a version of another song on this collection, "You Dog," which I downloaded a few years ago.) I've been gnawing away at this 3-disc collection for years. Sometimes when I have just a few tracks to get before the end of a month, I'll snach a few from this. I never get tired of Cab.

* "Psychopath of Love" by The Dusty Chaps. A fiend recently requested I play something by The Dusty Chaps on the Santa Fe Opry a few weekes ago. I found this on eMusic on a compilation called Boppin' in Canada. Turns out it was the wrong group. My friend wanted a band from Tucson from the '70s. These are Canadians  from a few decades later. Oh well, it's a cool little Cannuck-a-billy tune. These Chaps aren't as wil as Bloodshot Bill or Ray Condo, but it's a snazzy little tune.
at August 04, 2011