A version of this was published in The Santa Fe New Mexican
August 26, 2011

Remember the fabulous 1990s? After Kurt Cobain’s ghastly departure, there was a time when bands like Pavement and strange singer-songwriters like Beck ruled the hearts and minds of hip fans of what was called “alternative rock” — the ones who didn’t care for Limp Bisquick or Linkin Parking Garage and the other lunkhead rubbish they played on commercial alternative-rock stations. 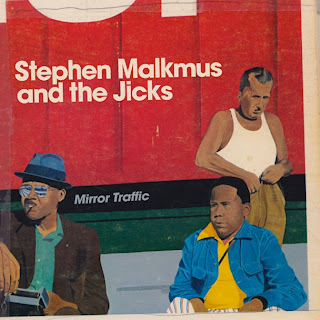 Pavement, which never quite became the cultural force many of its fans predicted or at least hoped for, broke up in 1999. And Beck — let’s just say his records became less and less interesting. The most recent Beck album that I still listen to is Midnite Vultures from 1999. (Most critics hated it, but they’re wrong.)

But Pavement fans and probably even some Beck fans should appreciate the new album Mirror Traffic by Stephen Malkmus and the Jicks.

It’s not really a Lollapalooza 1995 reunion, but Pavement frontman Malkmus teams up here with Beck, who produced the album. And it sounds a whole lot like Pavement in its heyday.

Admittedly, I haven’t heard all the Malkmus/Jicks albums, which have been released at a steady rate since 2001 (my favorite title being 2003’s Pig Lib). But out of curiosity I did listen to a few selections from those records, including a good chunk of Malkmus’ previous album, Real Emotional Trash (thank God for Spotify!), before writing this column.

Real Emotional Trash features all sorts of lengthy tunes that some critics have compared, not entirely unjustly, to jam-band music. (It also has one song, “Gardenia,” that reminds me of The Partridge Family, while “Elmo Delmo” may have roots in Jethro Tull.)

But after hearing some of the older albums, it would appear that the return to the rubbery, sometimes meandering Pavement sound was a conscious decision. Perhaps it’s a natural development following the Pavement reunion tour last year.

After that cool event, the band’s Bob Nastanovich told Spin that while future Pavement shows could be a possibility, it wasn’t likely that they would be doing any albums or writing new material. “It doesn't seem like a realistic possibility that any new music would be made,” he said. “At this point, Stephen does not write songs for Pavement anymore, or songs in the Pavement mind-set. I think he considers that part of his juvenilia, which is his own prerogative. He’s left that era behind him.”

Mirror Traffic may be proof that Malkmus wanted to prove his old bandmate wrong. The album begins with “Tigers,” one of the catchiest songs Malkmus has done since Pavement’s “Cut Your Hair.” It starts off with Malkmus singing, “I caught you streaking in your Birkenstocks<2009>/<2009>A scary thought in the 2Ks.” Is this the singer’s sly way of saying, “I’m too old to be here”? If so, he shouldn’t worry about it. Streak away, Stephen!

Another song is “Forever 28,” which, in Malkmus’ own words, is “from a jaded hipster perspective of someone who is above it all and making fun of things.” At the risk of sounding like some mystic numerologist, 28 is the year after 27, when self-destructive rock stars (Cobain, Amy Winehouse, Jimi, Jim, and Janis) tend to die. It’s got a bouncy beat that suggests Motown, though the song doesn’t really sound like it. (Malkmus claims he borrowed it from Hall & Oates.)

One of my favorite songs, perhaps because of my main job as a political reporter, is “Senator.” Malkmus tells us what some senator wants — and it’s not a seat on the Senate Agriculture Committee. This isn’t likely to get any commercial radio play in its present form, so Matador Records had a contest for suggestions to replace the phrase "blow job" for a FCC-friendly version of the song. (Sorry, the deadline's already passed.)

Another track I like is “Tune Grief,” which, despite its sad-sack title, is probably the most rocking tune on the record, though “Spazz” gives it a run for its money in that department. Beck’s influence really shows on “All Over Gently,” which starts off with an acoustic blues guitar riff.

And speaking of jam bands, the song “Brain Gallop” reminds me a little bit of The Grateful Dead’s Wake of the Flood era. It’s got a long guitar jam and sounds great to these ears.

A few songs are just a little too soft-core for me. “Fall Away” is a pretty song, but it’s a snoozer. “Long Hard Book” is much the same. But I like the steel guitar. And the song is essentially redeemed by the truly weird, chaotic guitar solo at the end.

The ’90s are gone, and Malkmus definitely won’t remain forever 28. But Mirror Traffic shows he’s still quite capable of making enigmatic and fun music.
at August 25, 2011