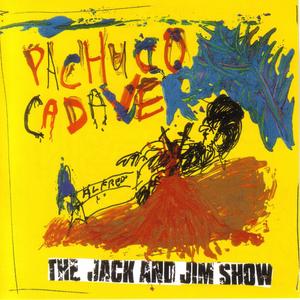 * Pachuco Cadaver by The Jack and Jim Show. So you didn't think it was possible to make Captain Beefheart sound even weirder?

Well take a bite out of this little tribute album by guitar mutant Eugene Chadbourne and Frank Zappa's late original Mothers drummer Jimmy Carl Black. Some tunes sound like a lost congregation of hillbilly snake handlers somehow got hold of Beefheart's songbook and turned them into insane hymns and, in some cases like "Dropout Boogie," surreal comedy routines.

Black's gruff voice is perfect for the bluesier tunes here like "Sure 'Nuff Yes I Do," and "Willie the Pimp," done here as a Delta blues with Chadbourne playing slide.

When Beefheart did "I'm Gonna Booglarize You Baby" it was a blues growler. But here it's a pilgrimage  into the Dark Dimension, featuring the insect hum of a didgeridoo,  a jazzy basson and other instruments played by guests. Chadbourne plays banjo on this, as he does on several other tunes here, most notable, the seven-minute version of "Clear Spot" and the stompin' "Steal Softly Through Sunshine Steal Softly Through Snow." I was lucky enough to see The Jim & Jack Show live in Albuquerque about a year before Jimmy died.  He lived in Germany the last years of his life and his trips to the states weren't that frequent.

A bunch of Jimmy's children came up from El Paso and Anthony to see the show. Both he and Chadbourne seemed to be having a great time. And they even did a couple of Beefheart songs -- "Willie the Pimp" and "The Dust Blows Forward and the Dust Blows Back" .


And I never miss an opportunity to brag that when I did Picnic Time for Potatoheads in the early 80s, Jimmy Carl Black was the Indian of my group. Hear his magic drums on "The Green Weenie" HERE. (It's the second song down.) 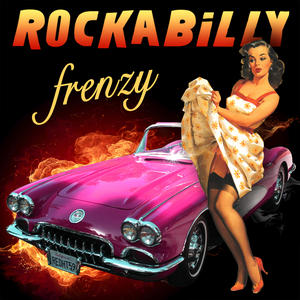 * Rockabilly Frenzy by Various Artists. Here's 53 tracks for $5.99. You do the math. It's a great bargain, like other cool compilations on the Rock-a-Billy label available at eMusic. (I've previously picked up 50s Rockabilly Hellraisers and 1950s Rock N' Roll & Rockabilly Rare Masters. I just can't get enough.) Many of the selections seem more hardcore honky tonk than rockabilly, but who's gonna quibble?

Frenzy concentrates mostly on unknown performers, though "Corky Jones," the rockabilly alter ego of   Buck Owens, is here with his shoulda-been-a-hit "Rhythm & Booze."

What kind of message does this send to the children? I feel almost drunk after listening to all these.

There's a not-bad cover of George Jones' "White Lightning" by a band called The Valley Serenaders. But that's not nearly as remarkable as "White Lightning Cherokee" by Onie Wheeler. No, it's not a politically incorrect look at Native American alcoholism. It's about a guy who gets a better thrill from kissing his Indian girlfriend than drinking his pappy's brew. But he has no intention of giving up either.

And there's not one not two but three versions of a song called "Beer Drinkin' Blues." One's by Eddie Novak, another by Rocky Bill Ford. Johnny Champion calls his song "Beer Drinkin' Daddy." All deal with a hard-drinking alcoholic whose drinking is interfering with his marriage. Ford plays it sad, while Novak seems more comical. My favorite though is Champion's. It's an upbeat song with a snazzy organ solo. He seems almost defiant about his beer drinkin'. 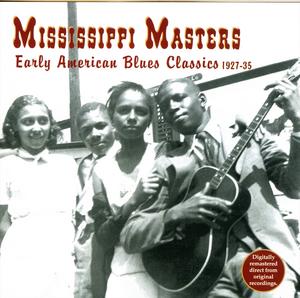 * Mississippi Masters: Early American Blues Classics 1927-1935 by Various Artists. The Mekons led me to this one. On their latest album Ancient & Modern, Sally Timms sings a song called "Geeshie," a spooky, bluesy little number I said sounds as if it came from "a speakeasy near the gates of Hell." The group based this song on an obscure blues song called "Last Kind Words" by a woman named Geeshie Wiley.

When I read that, I searched for the song on eMusic and found it here in this Yazoo Records collection, along with two other Geeshie tunes, "Skinny Legs Blues." (Look out, Joe Tex, the ghost of Geeshie is looking for you!) and "Pick Poor Robin Clean," which sounds like a crazy cousin of "Salty Dog" sung with Elvie Thomas.

Wiley is fairly obscure, but she might be the best known artist on this album. There's King Soloman Hill, who has a piercing voice that might remind you of Skip James. Blind Joe Reynolds does "Outside Woman Blues," a song revived in the '60s by Cream. I know now where Canned Heat got the "Bullfrog Blues." (It's by a guy named William Harris, who does that and two other tunes here.)

And Mattie Delaney was singing "Tallahatchie River Blues" decades before Bobbie Gentry and Billy Joe were throwing stuff off the bridge. 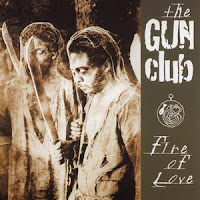 * The final five tracks of Fire of Love by The Gun Club. As I said last month when I downloaded the first six tracks, I came to this band decades too late.

I don't regret that. In fact it's pretty cool that I left some great musical surprises for my old age.

This was the first album by Jeffrey Lee Pierce and the boys and it just gets better after each listening.  There's some pumped up version of old Mississippi blues -- Robert Johnson's "Preaching the Blues" and a six minute wrestling match with Tommy Johnson's "Cool Drink of Water."

But Pierce's originals are powerful in their own right. "Ghost on the Highway," "Black Train" and "Good Bye Johnny" are raw and wild. Even though I'm a new initiate, it's hard to imagine rock 'n' roll without these songs.

* "Rainmaker" by Eliza Gilkyson. I stumbled across this song a few weeks ago when looking for songs by New Mexico artists for one of my Spotify playlists. Released on a 2005 Gilkyson compilation called RetroSpecto, this is one of her earliest recorded songs, released in the late '60s or early '70s under the name of Tusker, a Santa Fe band that Gilkyson fronted back when she was known as "Lisa. Along with my personal favorite group of that era, The Family Lotus, Tusker represented the best of New Mexico hippie music.

The lyrics are pure hippie-dippie wanna-be Indian: "We can dance, people, bring that rain down from the sky/We don't have to let the land go hungry or run dry/We can dance and bring Rainmaker back before we die ..." But it sure brings back great memories.
at October 08, 2011