OPENING THEME: Buckaroo by Buck Owens & The Buckaroos
Out There a Ways by The Waco Brothers
Too Much Thinkin' by Andy Vaughan & The Driveline
Gettin' By by Six Shot Revival
Open Road by Scott H. Biram
Bitter by Black Eyed Vermillion
Jesus Was a Wino by Lydia Loveless
Pink Elephant by Wally Willett
She's My Witch by Southern Culture on the Skids
Flop Top Beer by Buddy Meredith

Me Not Calling by Rock Brousard & Two Hoots and a Holler
Moonshine by Montie Jones
Uncle Sam by Anthony Leon & The Chain
Susie Anna Riverstone by The Imperial Rooster
A Girl Don't Have to Drink to Have Fun by Jane Baxter Miller and Kent Kessler
Elbow Grease, Spackle and Pine Sol by Dale Watson & The Texas Two
Jumping the Sharks by Carter Falco
Drop the Charges by The Gourds
Oh These Troubled Times by The Corn Sisters
Rubber Legs by Gene Smith 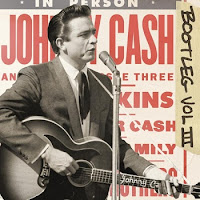 Cocaine Blues by Merle Haggard
Red Headed Stranger by Willie Nelson
Blue Eyes Cryin' in the Rain by Carla Bozulich
I Can't Help It-(If I'm Still In Love With You) by Hank Williams
The Love That Faded by Bob Dylan
Lion in Winter by Hoyt Axton
CLOSING THEME: Comin' Down by The Meat Puppets

Steve Terrell is proud to report to the monthly Freeform American Roots Radio list
at October 07, 2011