TERRELL'S TUNEUP: Johnny Cash is For Everyone

A version of this was published in The Santa Fe New Mexican
October 7, 2011


One of the best protest rallies that I ever covered took place during the 2004 Republican National Convention in New York. Sotheby’s auction house in uptown Manhattan held a reception for U.S. Sen. Lamar Alexander and the Tennessee delegation to the convention.

The event was billed as a tribute to Johnny Cash, and memorabilia from the Man in Black was to be auctioned. The reception riled Cash fans on the left, who argued that Cash was known for singing songs for America’s underdogs.

Before the rally, Ed Pettersen, a spokesman for a Nashville organization called Music Row Democrats, told me that he had spoken with Cash’s son, John Carter Cash, who wasn’t against the GOP event because his dad and Sen. Alexander were friends.

“If this is in conjunction with a reception for Lamar Alexander, I have no problem with it,” Pettersen said. “But if it goes beyond that, and the Republicans start proselytizing using Johnny Cash, I have a big problem with it.”

It was a nonviolent demonstration. Black-clad protesters sang Cash songs and carried signs referencing J.C. tunes: “I Walk the Line for Kerry,” “Send Bush to Folsom,” and one calling Republicans “Dirty Old Egg-Sucking Dogs.” The sign I liked best referred to an awful corporate hat act that performed for the GOP convention: “You Can Keep Your Brooks & Dunn, but Johnny Cash Belongs to Everyone.”

That message recently slapped me in the face when I received a review copy of Sony Legacy’s latest Cash compilation, Bootleg Vol. III: Live Around the World, scheduled for release on Tuesday.

In the middle of the first disc of the collection there’s a set of songs from the 1964 Newport Folk Festival. Cash is introduced by venerated lefty folk singer Pete Seeger, who was blacklisted during the McCarthy era. (During this set, Cash says hello to an offstage Bob Dylan, whom Cash called “the best songwriter of the age since Pete Seeger.”)

And then on disc two, there’s a set of tunes Cash performed at the White House in April 1970. Here he’s introduced by the 37th president of these United States, Richard Milhous Nixon.

And between the two is a set from a January 1969 show at the Long Binh Post in Vietnam, where Cash, June Carter Cash, and Carl Perkins entertained the troops, singing songs like “Remember the Alamo.” And there are even a few songs played for inmates — at Österaker Prison in Sweden. 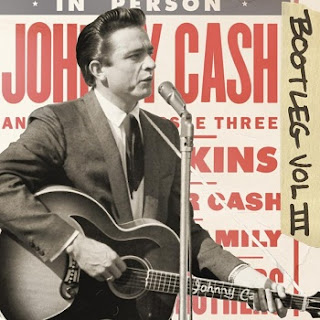 Johnny Cash belongs to everyone.

Like the previous two volumes in the authorized Cash Bootleg series (Personal File is the first, From Memphis to Hollywood the second), Live Around the World is a fascinating compilation of rare tracks, most of which are previously unreleased. Die-hard Cash fanatics as well as casual listeners will find plenty to love here.

As expected, some of the recordings are low in audio quality — especially the ones from live shows in the 1950s and early ’60s but also the ones from the mid- to late-’70s. Audiowise, they sound about the same as the ones recorded in a war zone a decade earlier. But what the heck, this is advertised as a bootleg.

Most of Cash’s greatest songs are represented here. There are a couple of versions each of “Big River,” “Daddy Sang Bass,” “Rock Island Line,” “I Still Miss Someone,” and “Wreck of the Old 97” — and three renditions of “I Walk the Line.” Cash never minded singing the hits.

Command performance for Tricky Dick: Cash didn’t always take requests, as President Nixon learned. Before the big White House show, Nixon, who was famous for courting the stars of Nashville, requested Cash sing a couple of his favorite country tunes of the day.

One was “Okie From Muskogee,” a hippie-bashing tune by Merle Haggard. Another was a more obscure number called “Welfare Cadillac,” which was done by a singer named Guy Drake. It made fun of all those lazy bums living a luxurious life while collecting welfare. Cash said, “No, sir.” He wouldn’t play those songs, not even for the Leader of the Free World.

A surprisingly gracious Nixon made light of that refusal while introducing Cash. “I’m not an expert on his music. Incidentally, I found that out when I tried to tell him what to sing,” Nixon said, evoking laughter and applause from his White House guests. And when he began his set, Cash joked back, “And for my second song, Mr. President —”

He started out with “I Walk the Line.” But he didn’t walk the line Nixon would have wanted. One of the songs he did that night was “What Is Truth,” based on “a poem for the youth of America.” It’s a sympathetic look at the young people of that era — even the ones with long hair — questioning authority.

“The young girl dancing to the latest beat has found new ways to move her feet / And the young man speakin’ in the city square / Might be tryin’ to say that he really cares.”


I can’t help but wonder what Nixon thought about this song a couple of weeks later when the Ohio National Guard shot and killed four student protesters at Kent State University.

But even Nixon knew the truth about Johnny Cash. As he said in his introduction that night, “He was born in Arkansas and he now lives in Tennessee. But he belongs to the whole country.”

Cash on the Spot(ify): Hey, Spotify users, check out my new playlist of Johnny Cash covers and tribute songs HERE.

Cash on the radio: I’ll be playing a huge cache of Cash Friday on The Santa Fe Opry. The show begins at 10 p.m. I’ll start in with J.C. songs a little after 11. And don’t forget Terrell’s Sound World, freeform radio at its finest, 10 p.m. Sundays. Both shows are on KSFR-FM 101.1 and screaming on the web at www.ksfr.org.