A version of this was published in The Santa Fe New Mexican
October 14, 2011

I was recently reminded of Randy Newman’s twisted love song “A Wedding in Cherokee County” when I first listened to Scott H. Biram’s “Broke Ass” on his new album Bad Ingredients. For some of you younger readers (I know you’re out there!) who aren’t familiar with Newman’s classic songbook, “Cherokee County” is about a doomed backwoods couple. It appears at the end of his 1974 album Good Old Boys.

To the strains of a slow, genteel Stephen Foster-ish melody, the groom sings of his spouse-to-be: “Her papa was a midget/ Her mama was a whore/Her granddad was a newsboy ’til he was 84 (what a slimy old bastard he was) ... Maybe she’s crazy I don’t know/Maybe that’s why I love her so.”

My heart was warmed in a similar way when I heard the first verse of Biram’s song:

“I’ve been spending all my money on some worn-out $2 whore/And you may think it’s funny, but I don’t think it’s fair/ that that old two-timin’ headache could ever get herself anywhere / ... yeah she’s my woman / You can see her every night / Just dancin’, lookin’ wicked til the early mornin’ light.” The singer declares, “She’s my number one undercover lover, but she’s been runnin’ way too fast and way too long.”

She might be a $2 whore, but the singer compliments her — I guess — when he calls her “the nicest piece of real estate to ever grace this town.”

It’s easy to imagine this wicked dancer laughing at the “mighty sword” of Biram’s protagonist, just like the bride of Cherokee County does in the song that immortalizes her.

But dark humor isn’t the main point of Biram’s song. The narrator’s woman is just part of his nightmare, just one bad aspect of his life of poverty and despair. “Guess I’m just talkin’ to a stranger / Guess I’m just pissing in the wind , Guess I’m just lonely, crippled, and angry, ’til I get on my feet again,” Biram sings.

This song is slower and more melodic than most of Biram’s tunes, sweetened with a little organ not too high in the mix. As he showed on “Still Drunk, Still Crazy, Still Blue” on Biram’s previous album Something’s Wrong /Lost Forever, Biram is perfectly capable of keeping his raunchy integrity even when he does it nice and purdy.

“Broke Ass” is a standout on Bad Ingredients, but it’s not the only one. Biram, the self- proclaimed “dirty ol’ one-man band” from Austin, Texas, does what he does best — strumming his guitar like a madman, stomping his percussion as if the ghost of Keith Moon lived inside his foot, and growling his (frequently distorted) vocals. 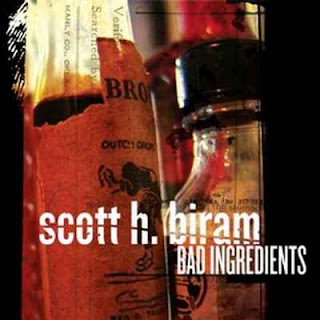 Like on his previous works, the production here is simple. The music is a ferocious blend of blues and country with a lo-fi, punk-rock aura. For the most part he sticks to his one-man-band credo — with the exception of Walter Daniels’ sax on the swampy “I Want My Mojo Back” and some percussion help on a couple of tracks from Matt Puryear.

Most of the songs are original, though Biram throws in a cover of Bill Monroe’s “Memories of You, Sweetheart” and Lightnin’ Hopkins’ “Have You Ever Loved a Woman.” But the best ones are the Biram originals.

I love the frantic rockers like the insane “Killed a Chicken Last Night,” “Victory Song,” (which starts off with some pretty fancy guitar picking), “Dontcha Lie to Me, Baby,” and “Hang Your Head and Cry,” which sounds like the history of Southern rock boiled down into a loud three-minute, 47-second roar. Also worthy are some of his smoldering blues tunes like “Just Another River,” which sounds like it’s begging to be covered by ZZ Top.

As I said, Biram does here what he does best. But he seems to keep doing it better. The man is nothing short of a one-man blast. 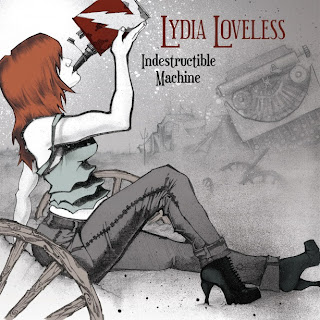 * Indestructible Machine by Lydia Loveless. Here’s my favorite new female country vocalist. Loveless is a 21-year-old (I have shirts older than her!) punk-rock honky-tonk gal from Columbus, Ohio. I’m not the first one to think her throaty voice suggests an ancient soul.

When I heard her I was reminded of Marlee MacLeod, an Alabama-born singer who, sadly, hasn’t released any new music in nearly a decade. In, sometimes when I listen to Indestructible Machine and my mind drifts (the best way to listen to music, of course), I think I’m listening to some new MacLeod songs. That’s not a bad thing.

But Loveless’ tunes tend to be rowdier than MacLeod’s. The album starts off with “Bad Way to Go,” which features crunching distorted guitars and a banjo. Loveless’ voice wails over all the din.

But that’s followed by an even stronger punch, the minor-key “Can’t Change Me,” in which she sings a harsh tale of drinking, passing out, talking too much, and drinking more. “If I can’t change who I am I shouldn’t try so goddamn hard,” she snarls.

I’ve read a couple of reviews of this album that complain that there are too many alcohol-soaked lyrics. (Then there’s the album cover, which shows Loveless chugging a can of gasoline. What kind of message does that send to the children?)

Maybe it does seem a little weird that a 21-year-old woman writes lyrics that seem to imply that she could match Johnny Paycheck drink for drink. But is there any law that says women singers have to write mopey confessionals about boyfriends who have a hard time sharing their feelings?

The truth is, Loveless’ “How Many Women” is one of the most soulful country songs I’ve heard in months. Tammy Wynette should come back from the dead to cover it. Heck, I even wish Steve Earle would make the tongue-in-cheek fantasy of Loveless’ song named after him come true. The two could sing some wild duets together.

Bloodshot Records is on a roll. It released the Loveless and Biram albums. Check out www.bloodshotrecords.com .

BLOG BONUS
A couple of videos for ya