Just Another Reason to HATE THE MUSIC INDUSTRY 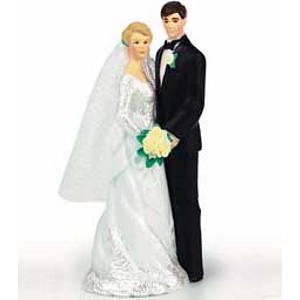 Are you one of the filthy pirates who has violated copyright laws by using your favorite music in a wedding video?

Well, the valiant patriots of the Music Industry will track you down and punish you.

I'm serious. They're cracking down on music in wedding videos!

Check out this report from ABC News a few days ago:

It may have started with the wedding of Tony Romo, the Dallas Cowboys' quarterback, to Candice Crawford in May. People magazine said the five-minute video they had made "hit the Internet looking more like a blockbuster movie trailer than nuptial footage" -- and soon it went viral on YouTube, complete with Coldplay's "Fix You" as theme music.
Now it's gone -- and so, apparently, are many wedding videos celebrating less-famous couples. The videographer who shot the Romo-Crawford video was threatened with a lawsuit for using music to which he had not bought the rights. He's settled, and agreed not to talk about it, and a chill has settled across the nice, warm world of weddings.
"Please don't use my name," said one wedding photographer who spoke to us. "We're just small fish. I don't want to be in the spotlight. They might just aim at me."
This photographer said he has now removed all the videos he previously posted on YouTube, Vimeo, or his own website with well-known music in the background. He said he can buy generic music for $50 for a three-minute track, but it cuts into his profits and his newlywed clients don't like it as much.
"We're just scared," he said. "We don't know what is going to happen to us."
Okay, here's the deal: Anyone who wants to use any song from Picnic Time for Potatoheads on a video at their next wedding, can do so for FREE. (And hell, it's better than Coldplay!)
at December 16, 2011