Sunday, Oct. 25, 1964. It was just eight months after The Beatles had turned the U.S.A. on its head with their appearance on The Ed Sullivan Show. And now another musical act from overseas was on the very same stage before an audience of screaming teenagers, appearing to be headed for pop immortality.

The Kim Sisters! Two sisters from South Korea (Sue and Aija Kim) and their cousin Mia Kim, wearing sexy, sparkly black dresses, came out and sang the hell out of an American gospel song, “Joshua Fit the Battle of Jericho.”

Then they did a medley of bagpipe tunes, starting out, for reasons I’m still not sure of, with “This Old Man” and finishing with “The Marines’ Hymn.” By the end of the number, they were backed by a kilted piper band from Long Island.

It’s all on a new Sullivan Show DVD set. That night on Sullivan in 1964 was a star-studded occasion. In addition to The Kim Sisters, there were classical violinist Itzhak Perlman and a one-legged tap dancer named “Peg Leg” Bates. There were some major comics of the day —  Phyllis Diller, Jerry Stiller and Anne Meara, and London Lee. Laurence Harvey read “The Charge of the Light Brigade.” And, of course, there were some amazing acrobats: the fabulous Berosinis from Austria.

And, oh yeah, the band that performed right before The Kim Sisters — a group from England called The Rolling Stones.

Don’t get me wrong. I love The Stones as much as the next guy, especially the period documented in the new two-disc DVD set All 6 Ed Sullivan Shows: The Rolling Stones.

But even though technically, Mick Jagger and company are the stars of these discs, for me the real treat is watching entire the episodes of Sullivan’s “really big show” with all the Borscht Belt comedians, jugglers, Shakespearean thespians, puppets, brassy belters, Romanian folk dancers, opera singers, circus animals, and so on. 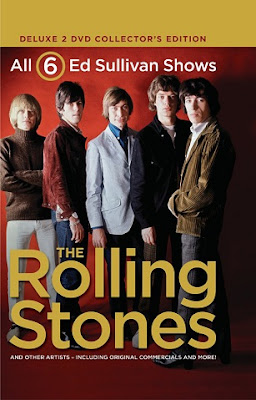 Just like the Sullivan DVD set starring The Beatles, which was released a few years ago, entire episodes are shown — with commercials.

(Consumer alert! There is a slightly cheaper DVD set called 4 Ed Sullivan Shows: The Rolling Stones, released just a few weeks before All 6 Ed Sullivan Shows, which, for reasons only known to some marketing genius, leaves out the first and last shows. Avoid it.)

Sullivan, a former boxer who later became a sportswriter and entertainment columnist for a few New York papers, ran his show like a slightly upscale vaudeville venue. Though the Sullivan Show was the best of its time, it was the norm for variety shows of the ’50s and ’60s to actually feature variety. Before the demographic goons took over prime-time network television, Sullivan and other shows like his actually attempted to have something for everyone in the family.

As seen on The Rolling Stones discs, many popular-music giants appeared on Sullivan’s show: Ella Fitzgerald was on the same evening as The Stones in 1969.

A few years before, they were on the same program as Louis Armstrong. I always wondered if Satchmo talked with Jagger, Keith Richards, or maybe jazz fiend Charlie Watts backstage.

(Of course, I wondered the same thing about the group of 44 Benedictine nuns from Pennsylvania who sang “Kumbaya” on the same 1967 show in which The Rolling Stones sang “Ruby Tuesday” and something called “Let’s Spend Some Time Together.” Did the Stones try to spend some time with the singing nuns?)

There were early appearances by Jim Henson and some pre-Piggy Muppets. When he appeared on a 1966 show, Sullivan introduced him with these words: “Jim Newsom and his puppets.”

And in 1969, Rodney Dangerfield got some respect on the same show in which The Stones sang “Gimme Shelter” and “Honky Tonk Women.”

Jamming with Edward (Sullivan): My favorite Stones performances on these DVDs are the earliest ones, that 1964 show and the one from May 2, 1965 (which also included appearances by soulful Brits Dusty Springfield and Tom Jones). Both of these programs captured in living black-and-white The Stones’ gritty blues, soul, and early rock sounds.

Among the tunes they performed on these shows were Chuck Berry’s “Around and Around” (though I prefer The Animals’ version from the same period), Irma Thomas’ “Time Is on My Side” (the first Stones song I ever heard), and a hearty version of Howlin’ Wolf’s “Little Red Rooster” with Brian Jones playing slide.

In the later shows, some of The Stones’ performances were pre-recorded, and I strongly suspect some of the music was too. For instance, when they did “Gimme Shelter” on that 1969 show, you hear Merry Clayton, or some similar background singer doing Clayton’s part. But you don’t see her. And on “Ruby Tuesday,” you can clearly hear an acoustic guitar, but nobody is playing guitar on stage. Jones is playing a recorder, Richards appears to be playing harpsichord, and bassist Bill Wyman is on cello.

The Jan. 15, 1967, show is the infamous performance in which some squeamish producer or nitwit network suit demanded the group change the lyrics of “Let’s Spend the Night Together” to “Let’s Spend Some Time Together.”

The Stones complied. Jagger sarcastically rolled his eyes when he sang the bowdlerized lyrics, and The Stones ripped into the song like jackals making a kill. Despite the clean lyrics, the version performed that night on TV was far more intense than the recorded version.

And after that, there was a Geritol commercial.

The Stones didn’t do the Sullivan Show for nearly three years after that. When they returned in Nov. 1969, Brian Jones was dead, replaced by guitarist Mick Taylor.

It’s great that these shows are available after more than 40 years. But consider this: The Kim Sisters appeared on Sullivan 20 times. I’m waiting for that DVD set.