By the time The Pistol, the Bottle, and Shaded Pastures was released earlier this year, fans of Anthony Leon & The Chain were familiar with most, if not all, of the songs on the group’s first CD. But that’s OK. It’s great to have these tunes available to play any time you want. 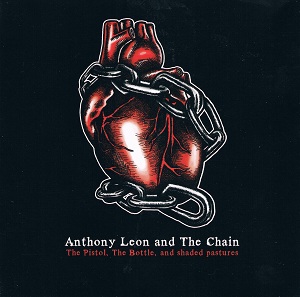 Leon, a native of Virginia, has only been in New Mexico a few years. But it didn’t take him long to become a local favorite. For this album, not only did Leon have a batch of great songs under his arm, he gives an intense live performance, greatly aided by his crack rhythm section — Carlos Rodriguez on bass and drummer Daniel Jaramillo.

Sometimes the Chain gang is joined by other superb local musicians who add new dimensions to the sound. But that trio of Leon, Rodriguez, and Jaramillo provides an unbeatable foundation.

Santa Fe has lots of good bands playing country and country-flavored music, but what sets Leon & The Chain apart is the huge rockabilly influence that permeates much of the group’s material. No fake Happy Days nostalgia here, just a tough strain of American music that informs the band’s sound. As the first song on the album says, he’s a brand new model honky-tonk man.

When I first got my hands on this CD, I skipped to “Shotgun,” the fifth track. Leon has several tunes that hang around in my head, but this one’s my favorite. It’s a rocker about a jealous man warning some funky dude messing with his woman. It’s got a memorable refrain: “I’ve got a shotgun; tell you what I’m going to do/I’m gonna stick this 3-inch mag right up your wazoo.”

What can I say? I’m a sucker for poetry.

Almost as good is “White Dress,” another fast-paced song about a jealous lover. His ire is directed at his philandering sweetie, who’s got “10 other boys just like me cursing your sins.”

Another standout is “Uncle Sam,” a rockabilly choogler about a kindly dope peddler. I love when the beat slows down to a gospel-like bridge in which Leon and guest singer Felecia Ford sing, “Oh doctor, won’t you please ... his prescription for me,” over a heavy organ (played by Gary Miller).

My only complaint is that one of my favorite Leon and Chain songs (I forget the title, but it has to do with the devil and a saloon called Red’s), wasn’t included. The only consolation is that the band’s version of “Rudolf, the Red-Nosed Reindeer,” which the group performed live last week on KSFR’s The Twisted Groove, also wasn’t included. Sorry, guys!

More noises from the country: 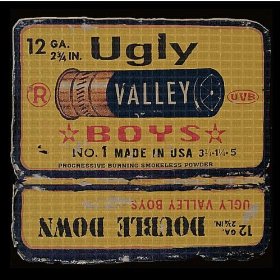 The first song, “Pappy,” is a celebration of a moonshiner. It sounds like Eastlyn, who has a low, gruff voice, has been drinking his pappy’s product since he was a baby. “Sure did his best to keep the town from going dry,” he sings. “Cops said, ‘Hell, that’s the fastest man alive.’” It’s not quite in the same league as Robert Mitchum’s “The Ballad of Thunder Road,” but it’s one of the better moonshiner songs in recent decades and a good way to set the tone for the rest of the album.

There are several songs overflowing with Johnny Cash chunka-chunka and outlaw attitude. One of my favorites is “Clickity Clack,” an upbeat minor-key tune about a guy who has upset his girlfriend and perhaps everyone around him: “If you won’t get out of the way, I won’t step aside/If you got something to say, well get in line.”

“Ugly” might be in the group’s name, but these guys write some really pretty melodies. “Alota Guns” is about a man who brags that he has, well, a lot of guns — at least symbolically. The refrain (“Oh-oh, I gotta lotta guns and each one’s loaded with a different memory”) is an irresistible hook that will stick in your mind.

And even better is the melody of “Power Lines,” a lonesome-road tune with a happy if world-weary melody.

I don’t think Eastlyn and Brandenburg have fired all their guns yet. I’m looking forward to more. And, hey guys, New Mexico’s not that far from Utah. Come on down!

*  South of Nashville by Honky Tonk Hustlas. When I first saw this band’s name I feared it might be some crappy alt-country/hip-hop fusion group. But then I heard one of Honky Tonk Hustlas’ songs on Outlaw Radio Chicago and realized these guys, who come from Montgomery, Alabama, sound a lot more like Wayne “The Train” Hancock than they do Cowboy Troy.

And actually, they sound a bit like the Ugly Valley Boys. too. Like the UVB, the Hustlas is a two-man band — except when others join in. The permanent members are singer and guitarist T. Junior and Stemp on standup bass. The sound is acoustic-based traditional country with lots of fiddle, mandolin, and dobro.

Even if country radio still played good country music (and it doesn’t), it would never play the Hustlas. That’s not just because of the band’s occasional use of profanity, or because the song “Corporate Man” might hurt the feelings of the soulless suits who run commercial radio. It’s because the lyrics to some of the songs are so dark and stark. “My Worst Enemy,” “Pray I Won’t Wake Up,” and even the upbeat “Never Gonna Quit” deal frankly with self-destructive urges. And the chilling “Death’s Cold Sting” reminds me a lot of Hank Williams’ “Alone and Forsaken” — which wasn’t exactly a big radio hit for Williams.

Not all the Hustlas’ songs are grim. The title song is a fiddle-driven toe-tapper, while “Drinkin’ With My Friends” is just a good honky-tonk tune.

However, in the context of some of the other songs, you might worry that after a night of drinking with his friends, the narrator could end up sitting on the edge of his bed in a lonely room with a gun in one hand and a whiskey bottle in the other singing “Death’s Cold Sting.”
at December 09, 2011