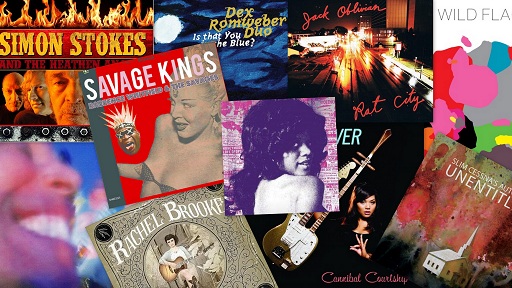 Here are my favorite albums of 2011. Do yourself a favor and go buy as many of these as possible, including — nay, especially — the ones you haven’t heard of.

*  Bad as Me by Tom Waits. In these difficult economic and political times, hearing music this excellent from an old master — who is well along the road to senior citizenship — is a sweet and welcome beacon in the fog, even when much of the music is dark and threatening. It’s reassuring that Waits is awake and creating, making music that still matters, growling with the alley cats, and bellowing like an immortal. Waits is such a monster that he attracts a whole boatload of star performers as sidemen, and yet you never once forget that Bad as Me is a Tom Waits album, not a guest-star extravaganza.


*  Wild Flag. This isn’t the rebirth of Sleater-Kinney, but it is definitely some of the most satisfying rock ’n’ roll I heard in 2011. Guitarist/singer Carrie Brownstein and drummer Janet Weiss of Sleater-Kinney are together again in this self-titled album. But wait, as the late-night TV ads say, there’s more! This band also includes singer/guitarist Mary Timony, who fronted a 1990s indie band called Helium, and Rebecca Cole of The Minders. Like S-K, Wild Flag makes wild and timeless rock ’n’ roll with brawn and brains.

*  Is That You in the Blue? by Dex Romweber Duo. Like this duo’s previous album, this is a minimalist masterpiece basically consisting of Romweber (formerly of The Flat Duo Jets, a pioneering roots-punk twosome) on vocals and guitar and his sister Sara Romweber bashing away on drums, subtly aided by other instruments in certain spots — an organ here, a sax there, standup bass here and there. There are lots of rocking stompers here, but my favorites are the slow, spooky ones highlighting Dex’s haunting croon.

*  Down in the Barnyard by Rachel Brooke. She’s the Wednesday Addams of country music. Her voice is sweet, almost cute. On most songs, the accompaniment is spare and simple -- mostly just her guitar. But listen to the lyrics on some of the songs on this unassuming little album, and you’ll realize she’s got a twisted, evil side. Like my favorite folk songs, these tunes are full of murder, sex, and mystery.

*  Savage Kings by Barrence Whitfield & The Savages. After a quarter decade, East Coast R & B and soul shouter Barrence Whitfield reunited last year with the core of his original band, The Savages, a move instigated by his old guitarist Peter Greenberg, now a Taos resident. Besides rereleasing their first self-titled album, Barrence and the boys recorded a mighty new album full of wild delights including The MC5’s “(Your Love Is Like a) Ramblin’ Rose”; “Willie Meehan,” a tale of an old boxing champ written by Greenberg and Taos crony Mike Mooney; and my personal favorite, the Lightnin’ Slim dirty-blues classic “It’s Mighty Crazy.”


*  Simon Stokes and The Heathen Angels. This self-titled album has everything I like about Simon Stokes — boozy biker rock, some credible honky- some mad folk-inspired ballads that would make your typical folkie wet his pants in fear. “Hey You” is an instant Stokes classic dealing with a confrontation between a man on edge who is basically irate with the world and someone who looks at him wrong. “Let’s Do Wrong Tonight,” a duet with Annette Zilinskas (formerly of The Bangles), is a 100-proof honky-tonker. And “Down for Death” is what Fairport Convention would have sounded like had the group been fronted by a homicidal motorcycle outlaw.

*  Rat City by Jack Oblivian. Memphis rocker Jack Yarber has played in respected outfits like The Compulsive Gamblers and, of course, The Oblivians, whence he got his stage name. This album is full of sweet, sweaty rockers, many of which are graced with understated pop sensibility. The title song is a crunchy blues-punk workout, while “Old Folks Boogie” sounds like John Lee Hooker filtered through a meat grinder. “Girl With the Bruises,” about an abused woman, could almost be a lost Paul Westerberg song. And there’s even a good-time version of Billy Swan’s “Lover Please.”


*  Unentitled by Slim Cessna’s Auto Club. This Denver band delivers that backwoods hellfire old-time religion on this album. The best songs are dark and spooky. “Hallelujah Anyway” is a twisted tale of an arranged wedding. “United Brethren” is an emotional song about a preacher losing his congregation to another church, which also happened to his great-grandfather. It’s not a problem most of us will ever face, but when singer Jay Munly pleads “Lord have mercy upon us” at the end of the song, in his lonesome tenor with just an autoharp behind him, only the most hard-hearted heathen would be unmoved.


*  Scandalous by Black Joe Lewis & The Honeybears. Black Joe and his band from Austin gave one of the best live shows in Santa Fe this year and released one of the best albums. This sophomore rock ’n’ soul effort will glaze your ham. It’s got more hard rock and electric blues packed in its grooves than the group’s first album, Tell ’em What Your Name Is. The whole album is a blast, but the most fun has to be “Mustang Ranch,” a tale of a visit to the famous Nevada cathouse.


*  Cannibal Courtship by Dengue Fever. For the uninitiated, Dengue Fever sprang from the crazy, psychedelic music that flourished in Cambodia in the pre-Pol Pot years. But Dengue isn’t about faithfully recreating that music, which was brutally driven underground by the Khmer Rouge during the Killing Fields era. Fronted by Cambodian singer Chhom Nimol, this California band builds upon the music of artists like Pan Ron, Ros Sereysothea, and Sinn Sisamouth — the same way The Rolling Stones built upon the foundation laid down by Muddy Waters and Chuck Berry.