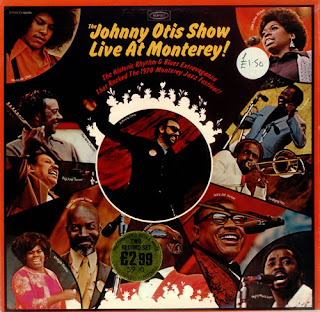 * The Johnny Otis Show Live at Monterey. The death of Etta James on Jan. 20 provoked an outpouring of tributes to the seminal R&B singer -- and rightfully so.

But the passing of Johnny Otis just three days before went comparatively unnoticed. Maybe if President Obama had played "Willie and the Hand Jive" instead of "At Last" at his inaugural ball ...

Many Etta fans might not even realize that Otis was instrumental in launching her career. He "discovered" her when she was just 14, producing her first hit "The Wallflower (Roll With Me Henry),"  an "answer" song to Hank Ballard's "Work with Me, Annie." Ballard also was part of Otis' stable for awhile.

Besides "Hand Jive," Otis didn't have many major hit records under his own name. He was a producer and  an A&R man for King Records. He worked with Wynonie Harris and Charles Brown, Little Willie John and Jackie Wilson. He played vibes on Johnny Ace's haunting "Pledging My Love" and played drums on Big Mama Thornton's original recording of "Hound Dog."

And Otis was a bandleader who toured with an incredible R&B revue The Johnny Otis Show (originally the California Rhythm and Blues Caravan), which at various points included the likes of Etta, Big Mama and Little Esther, who grew up to be Esther Phillips.

This album is a live recording of the Otis' revue at the 1970 Monterrey Jazz Festival. Some of the giants of west-coast R&B are here -- Big Joe Turner, Eddie "Cleanhead" Vinson, Pee Wee Crayton, Roy Milton,  Roy Brown, Ivory Joe Hunter, Otis' then teenage son Shuggie Otis and, best of all, Esther Phillips.

Some of these codgers' careers dated back to the 1940s. But at this show they still were full of that crazy R&B energy that popped the eyes and twisted the heads of an entire generation all those years before.

Highlights here include Vinson's "Cleanhead Blues," on which he sings and plays the sax that made him famous. (Here's some Cleanhead trivia: In the early '50s, his band included a young sax player named John Coltrane.And Eddie became "Cleanhead" after he lost his hair as a young man after using a lye-based hair straightener.)

Big Joe Turner proves he was still Boss of he Blues with Otis at Monterrey. He has two songs here, "Plastic Man" and "I Got a Gal."

But the real show-stopper is Little Esther. "Cry Me a River Blues" bears little resemblance to the torch blues standard "Cry Me a River." Phillips' song is an uptempo romp in which lyrics you'll recognize from who knows how many blues and R&B standards flow from her mouth. Maybe she was improvising. Maybe she was possessed. But you don't want it to end. Her other song, "Little Esther's Blues" slows down. It's a soulful simmer with Otis out front on the vibes.

If there's an R&B revue in Heaven, they just picked up a hell of a band leader. 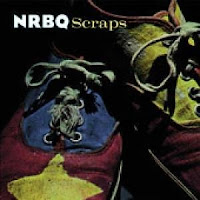 * Scraps by NRBQ It was another recent rock 'n' roll death that inspired me to download this album. Longtime NRBQ drummer Tom Ardolino died on Jan. 6, ending all hopes of a reunion of the classic NRBQ lineup of Terry Adams, Joey Spampinato, Big Al Anderson and Ardolino.

This album, the second in NRBQ's long, long career, was recorded in 1972, a few years before Ardolino joined. (Tom Staley was still there.) In fact, Big Al had just recently hopped on at that point, replacing guitarist Steve Ferguson. In 1972, the "Q" stood for "Quintet," as the group had a vocalist named Frank Gadler.

Scraps had most if not all the ingredients that served the group so well for the next three decades. (The one thing missing is that Big Al had not yet emerged as a vocalist and songwriter for the band.) There was plenty of goofball humor ("Just Close Your Eyes and Be Mine, Ruby" is just one example) Adams' subtle Sun Ra influence popping up in strange corners, an inspired cover (an irresistible version of Johnny Mercer's "Accentuate the Positive") and straight-ahead roots rock.

Highlights here include the road-warrior anthem "Howard Johnson's Got His Ho-Jo Working," a kazoo-enhanced "Who Put the Garlic in the Glue," an instrumental called "Tragic Magic" (which reminds me a little of a subdued Frank Zappa) and the ultra-catchy "Magnet." 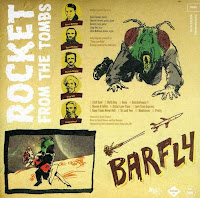 * Barfly by Rocket from the Tombs. Riddle me this, Batman -- how can a band that broke up in the mid 1970s record and release their first  album of new material just last year?

I guess the answer would be "Because they can."


This is the story of Rocket from the Tombs, that influential Cleveland band that included David Thomas of Pere Ubu and Cheetah Chrome of The Dead Boys and punk-rock forefather, the late Peter Laughner (also an early member of Pere Ubu.)

RFTT basically was a word-of-mouth band. There were scattered bootlegs, but they never recorded a proper album during their brief existence in the '70s. A couple of tunes, "Amphetamine" and  7-minute recording of their song "30 Seconds Over Tokyo" surfaced in a 1990s Ubu box set Datapanik in Year Zero. In 2002 came a compilation of lo-fi live recordings and demos called The Day The Earth Met The Rocket From the Tombs.


Original members Thomas, Chrome and bassist Craig Bell got together with Television guitarist Richard Lloyd filling in for Laughner and and drummer Steve Mehlman for a Rocket reunion tour in 2004, resulting in an album called Rocket Redux consisting of RFTT  classics recorded in the studio.


And finally, last year they 21st Century version of Rocket from the Tombs brought the world a bunch of new songs.

I'll be writing more about Barfly in an upcoming Terrell's Tune-up. Watch this blog! 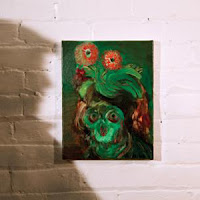 * Whenever I Want It by Mark Sultan . This is the second of two solo albums Sultan released last year. I downloaded the first one, Whatever I Want in last months's eMusic batch. And I reviewed them both in a recent Tuneup.

Some of my favorites on Whenever include the rockabilly-fueled “Satisfied and Lazy," “Party Crasher,” which gets psychedelic with a droning organ, some “Paint It Black” guitar riffs, and distorted background vocals that may make you think of Dion & The Belmonts interpreting the Tibetan Book of the Dead.

I'm also fond of "Pancakes," which makes me think of  Sha Na Na making the greatest IHOP commercial in the history of the world.

Then there's The epic eight-minute jazz odyssey “For Those Who Don’t Exist,” whic starts out with Sultan strumming a guitar with the tremolo way up and whistling a weird little melody that could almost be a slower version of the Pixies’ “La La Love You.”
at February 15, 2012