Two years after their last live album, the mighty Plimsouls are back with an even more powerful concert CD. Not bad for a group that broke up almost 30 years ago. 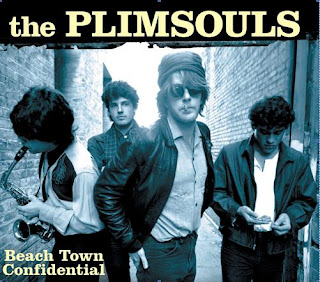 Even if you didn’t know anything about The Plimsouls, you would have a hard time believing that Beach Town Confidential was recorded just a couple of months ago, not in 1983.

Now what should you know about The Plimsouls?

They rose from the fires of the frenzied L.A. punk/New Wave scene of the late ’70s and early ’80s. Led by Peter Case, who had been in a punk group called The Nerves, and fortified by Eddie Muñoz on guitar, Dave Pahoa on bass, and drummer Louie Ramirez, they forged a sound that featured the guitar frenzy of their punk peers but sweetened it with irresistible melodic hooks. You could hear echoes of rock’s founding fathers, mid-’60s folk-rock, and sweaty soul.

The Plimsouls only released a couple of studio albums in their heyday, including their major-label debut, the over-produced but — hey, it was the ’80s — still worthy Everywhere at Once, which yielded the closest thing the band had to a hit, “A Million Miles Away.” They broke up in the mid-’80s when Case decided to pursue a solo career as an acoustic troubadour, which was a return to his roots as a street busker in San Francisco’s North Beach area.

But about every 10 years or so he reunites with the other Plimsouls for a few shows, most recently in 2006. (In 1996, they actually did a fresh studio album, the undeservedly out-of-print Kool Trash, which every true Plimsouls fan should demand to have re-released.)

There are a lot of similarities between Beach Town Confidential and Live! Beg, Borrow, Steal, the Plimsouls’ live record recorded in 1981 and released in 2010. Many of the songs are the same — “Zero Hour,” “Shaky City,” and, of course, “A Million Miles Away.”

But the more recent album includes a lot of songs we haven’t heard before on live Plimsoul albums.

“Jumpin’” is just one of the rarities here. Another is “Who’s Gonna Break the Ice,” which — like the best Plimsouls songs — is as catchy as it is urgent. There is even a little-known Everly Brothers song called “The Price of Love.” Like the Everly Brothers, the Plimsouls play this as a bluesy stomp with prominent harmonica. Case pals Andrew and David Williams sing lead on this one, their brotherly harmonies evoking the Everlys.

Beach Town Confidential has the only live recordings of Plimsouls tunes “Magic Touch” and “Oldest Story in The World” — hearty rockers both — and “Hobo,” an instrumental Case dedicates to “all the surfers in the house.” (The show was at Huntington Beach. There probably were quite a few there.)

I think my favorite Plimsouls surprise here, though, is a punchy version of a Moby Grape song, “Fall on You.” All I can say is “Grape job!”

Case is about to embark on a tour with former Nerves bandmate Paul Collins. (They’re playing in Arizona and Texas, but seem to have forgotten about that state in the middle.) I’m hoping the response to Beach Town Confidential will be so great that he will do another Plimsouls reunion — and record a new Plimsouls album — in the near future. 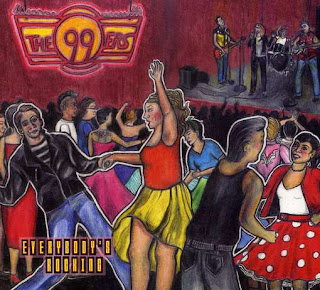 *  Everybody’s Rocking by The 99ers. This record has been out since early last year, but I just recently sunk my teeth into it. It’s the third record by a group that bills itself as a Minnesota punk/rockabilly/surf band.

Minnesota? Why not? One of their songs here, “Minnesota Sun,” is a rewrite of The Rivieras’ “California Sun.” (Come to think of it, last year, the title song of the collaboration between Mama Rosin and Hipbone Slim was “Louisiana Sun,” a Cajunized “California Sun.”

Since this album was released, the term “99ers” has taken on new political connotations. But don’t worry. You won’t hear any weird “human mike” chants or political polemics here. The band named itself after its favorite ice-cream dessert.

This album, on the Spinout label owned by Los Straitjackets’ Eddie Angel, is nothing but good, basic, happy rock ’n’ roll, grounded in Chuck Berry, colored by The Beach Boys, and pumped up by The Ramones. (One song here is called “Ramones Forever.” It’s a cover of a Shonen Knife tune immortalizing our beloved cretins from Queens.)

My two favorites are sung by Molly Holley — the frantic “Six Steps to Your Heart” (I can almost imagine The Plimsouls playing this one) and a sultry cover of a Brenda Lee rockabilly-tinged “Sweet Nothin’s.”

There’s a song here called “Albuquerque Annie,” about a woman who sings in a rockabilly band. It mentions Central Boulevard as well as the Tramway. But it’s not the first time The 99ers set a song in the Land of Enchantment. Their 2008 album, Stand Up and Surf, has a song called (I’m not kidding) “The Surf at Santa Fe.” (“So to my compadres in Minneapolis/Get yourself to N.M. if you’re in need of bliss,” British Steve Shannon sings.)  According to one source close to the band, Shannon is a frequent visitor to this state.

Update: 2-27-12 The previous version of  The 99ers section here had a couple of errors, including the identity of the New Mexico visitor and Eddie Angel's relationship with the album. The text has been corrected.