A version of this was published in The Santa Fe New Mexican
Feb. 24 2012

The last time I wrote about Andre Williams, I reported that he seemed to be slowing down. That’s an understandable thing for a guy who is 75 years old.

That assessment came from the fact that his latest album at the time, That’s All I Need, didn’t seem to have the fire of his previous efforts. But I think I probably spoke too soon.

Williams is releasing an impressive new album this week, Hoods and Shades. And that’s only a few weeks after a jumping little five-song EP, Nightclub, with a Chicago band called The Goldstars, came out. 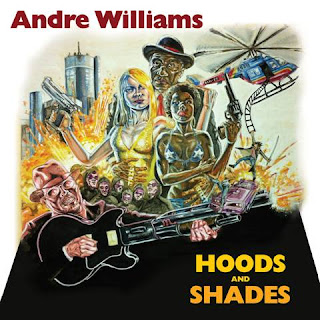 Although he’s been in the music biz since the 1950s and wrote an actual hit — “Shake a Tail Feather,” covered by Ike & Tina Turner and James & Bobby Purify — Williams has never been a household name.

His is one of those terrible R & B years-in-the-darkness stories — obscurity, drugs, homelessness — that’s way too common. (Rest in peace, Howard Tate.) In the late ’90s Williams began his current incarnation as an underground indie rock elder statesman. He recorded for some of my favorite labels including Bloodshot, Norton, In the Red, and Pravda.

Williams’ albums are always fun, and Hoods and Shades is no exception. What’s exceptional about it is that it’s interesting on so many levels. The first thing you notice about Hoods is its cover, which resembles some blaxploitation movie poster. Williams is there, with his arms around a couple of gun-wielding babes against a backdrop of fiery explosions, skyscrapers, a police helicopter, hooded thugs, and some mean-looking guy in a fedora playing what appears to be a combination guitar/machine gun.

I’m not certain, but I’m thinking the latter is supposed to be guitarslinger Dennis Coffey. Coffey is best known as one of the Funk Brothers, that Detroit collective of studio cats who gave us the Motown sound.

He played on such Motown hits as “Runaway Child,” “Just My Imagination,” and “Cloud Nine” for The Temptations; “War” by Edwin Starr; and “What Does It Take to Win Your Love” by Junior Walker & The All Stars. He also played on non-Motown records including Funkadelic’s first album, Freda Payne’s song “Band of Gold,” and — best of all, in my book — “Who’s Making Love” by Johnny Taylor. In other words, he is one serious picker.

Indeed, it’s Coffey who most contributes to the unique sound of Hoods and Shades. But the rest of the musicians here aren’t exactly lightweights. Among them are Detroit producer and former Dirtbombs member Jim Diamond playing electric bass and Don Was on upright bass.

According to the publicity material for this project, Williams has referred to Hoods and Shades as his “folk album.” That’s probably because Coffey’s acoustic guitar-playing is prominent on many cuts. But the term folk is pretty misleading. This isn’t “Michael Row the Boat Ashore.”

Coffey and crew create a swampy sound to complement Williams’ vocals. This musical backdrop is a perfect fit for this collection of songs.

The opening song, an upbeat blues number called “Dirt,” is a new take on the basic dust-to-dust theme of Memphis Slim’s “Mother Earth.” Williams, taking the voice of a streetwise sage, chuckles before he starts singing, “It don’t matter how high we go/It don’t matter if it’s high or low/It don’t matter if we help or hurt/When it all boils down, we just dirt.” There are a couple of lengthy story songs here that I suspect will be the main things most fans will remember about this album. There’s the atmospheric title song, in which Williams relates a number of terrifying descriptions of violence and poverty in a landscape haunted by young thugs hiding hardened faces behind hoods and sunglasses. The background music is a low-key acoustic blues shuffle with Coffey’s electric guitar providing a distant, desperate sounding response.

Then there’s a funny shaggy “Dogg” story called “Swamp Dogg’s Hot Spot.” Yes, the hero of this tale is none other than soul singer Jerry Williams, aka Swamp Dogg. Somehow I don’t think this story is really true. I’m not sure whether Swamp and Williams really met in “the county jail” like the song says, but I’m pretty sure that Andre Williams never got popped for “selling bootleg CDs.” (In real life, Swamp produced a 1990 Williams album, Directly From the Streets.)

My personal favorite on Hoods is a dandy new version of an old song Williams co-wrote, “Mojo Hannah.” This has been recorded by Esther Phillips, Aaron Neville, Marvin Gaye, and an underrated New Orleans singer named Tami Lynn. Williams doesn’t have the voice of any of those, but his knowing rasp does the song justice. 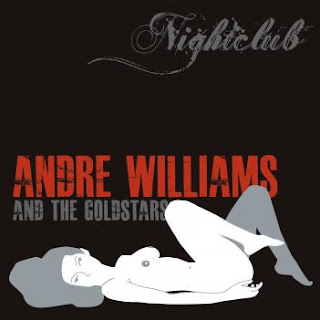 Nightclub is more typical of what Williams fans have come to expect in recent years. The Goldstars is a fine band playing at the intersection of garage rock and soul music. The group even did a high-energy cover of Williams’ song “Agile, Mobile, and Hostile” a few years ago. And recently The Goldstars has been Williams’ touring band.

Williams has been paired with many bands on recordings in recent years. But with The Goldstars, there’s a real chemistry that’s not always apparent with other backup bands.

My favorites here are “Hot Coffee,” a tight rocker in which Williams sounds like an unholy combination of sex maniac and caffeine fiend, and “Babblin’ Brook,” about a female companion who won’t shut up.

My only complaint about the E.P. is that it’s an E.P. and not a full-length album. I hope that’s something on Williams’ to-do list.