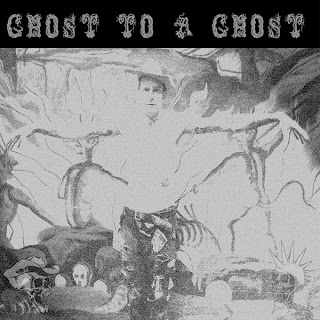 * Ghost to a Ghost/Gutter Town by Hank 3. This two-album, two-hour-plus set is part of the avalanche of music Hank unleashed last year following his emancipation from the evil Curb empire. (There also was Attention Deficit Domination, which showed his love for metal) and the bizarre Cattle Callin', a hillbilly answer to Lou Reed's Metal Machine Music.)

So Ghost to Ghost is Hank 3's country set. There's fiddles and banjos. Drinkin', druggin', fuckin', shootin' guns -- good dirty outlaw fun. But make no mistake, it's country on his own terms. Lyricswise, he's ploughed much of this ground before. But more than ever, he's taking the music to strange corners.

The album starts off with fairly straightforward country sounds. But by the third track, "Ridin' the Wave" things take a turn for the little crazy. The drums are raw thunder, there's some kind of pump organ that sounds like a call from a past century and the fiddle and electric guitar create a wilds backwoods cacophony.

But don't think the boy can't do purdy. "The Devil's Movin' In" is just that. And so is "Time To Die,"   though the drums sound like they might have been lifted from a voodoo ceremony. There's some sweet gypsy tango featuring fiddle and accordion in the title song.

One of my favorite tracks here is "Ray Lawrence, Jr." It's actually two songs written and sung by an Arizona pal by that name, both recorded on Hank's bus. The first one, “When You Lose All You Have,” is a sweet country moaner that Lawrence wrote while living in a homeless shelter. The second, "Back in the Day," is more upbeat, with a chunka chunka Johnny Cash vibe. (Lawrence was interviewed last year by Saving Country Music. Read it HERE.)

Lawrence isn't the only guest vocalist here "Trooper's Holler" features Hank's dog. This might just be the most bitchen dog song I've heard since Grandpa Jones' "Old Rattler." And hell, I'd rather listen to Trooper than some worthless guest star like Kid Rock or Sting. But some pretty cool human guests lie ahead on the second album.

Son of a gun, Hank has some fun on the bayou on the second album in this set, Guttertown. This features Hank experimenting with Cajun music as well as atmospheric, ambient swamp soundscapes -- birds, bugs, beasts, wind, water and railroad tracks.

Then there's some spooky, exotic instrumental dirges like "Chaos Queen" and "Thunderpain" that sound like soundtracks for Buggery Night at the Temple of Doom.

All in all, the results of the Guttertown experiment are mixed -- and that might be too generous of a verdict.

But but there are some gems on Guttertown too. The spirited "Gutter Stomp" for instance borrows the melody of "Bosco Stomp" (which already had been borrowed for "Cajun Stripper).

And even better is the duet with Tom Waits (now there's a guest star!) on the song "Fadin' Moon." Whenever I here this song I get this image of Waits and Hank sharing a bottle somewhere deep in a swamp where neither belong but both feel right at home.

After being under Curb's corporate thumb for so many years, Hank 3 undoubtedly reveled in his freedom to create whatever weirdness tickled his mind. But with so many sound-effect and atmosphere tracks here -- some of them rather lengthy -- I sincerely believe that a wise, sympathetic producer not afraid to say, "Let's save this for the deluxe edition 20 years from now," could have benefited this work. It easily could have been whittled down to one decent album -- though that's the case with way too many double albums. 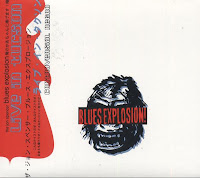 * Controversial Negro in Tucson by The Jon Spencer Blues Explosion. Good thing  Spencer and crew recorded this in 1996. I'm pretty sure the Arizona state Legislature has in recent years passed a bill prohibiting controversial Negroes in the state.

But seriously, folks, this is The Blues Explosion doing what they did best romping, stomping, screaming and howling through their stripped down, blues-touched gutter rock.

Hey Spencer, I like Heavy Trash and all, but listening to this glorious mess, I'm convinced that the Blues Explosion should rise again. 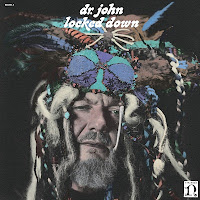 * Locked Down by Dr. John. Here's the best album the good doctor has done in decades. The music recalls his early voodoo-drenched Night Tripper days, but it's got a sharp contemporary edge — for which we can thank producer Dan Auerbach, frontman of The Black Keys. But unlike some older artists produced by hip young bucks, Dr. John doesn't feel like a fish out of water here. The music is fresh, not forced.

Auerbach reportedly wanted to get Dr. John back into the thick, atmospheric, heady hoodoo excursions of his early albums — Remedies, Babylon, The Sun, Moon & Herbs, and especially his classic Gris-Gris. What’s so refreshing about this record is that it has most of those elements that made Dr. John so irresistible. Yett it doesn’t sound like a paint-by-number re-creation of the old sound.

Sound familiar? Yes, this was the subject of Terrell's Tune-up not long ago.

Plus
* "Weedeye" and "Rickshaw Rattletrap" by Churchwood. These are the two songs I didn't have from Churchwood's Just the Two of Us "single." (The other two, "A Message from Firmin Desloge" and "Metanoia" are on the latest Saustex sampler Sample This.)

* "Forbidden Fruit" by The Band. This is a cool tune from The Band's 1975 Northern Lights/Southern Cross album. I already had most of the songs I like from that record from various compilations, but somehow "Forbidden Fruit," sung by the late great Levon Helm, never made it into any best-of retrospectives. I had to have it for my recent Santa Fe Opry tribute to Helm, who died of cancer last month.
at May 22, 2012