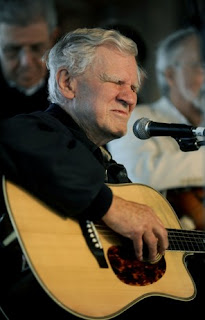 We've lost another great one. Just a couple of months after the passing of Earl Scruggs, Doc Watson died on Tuesday at the age of 89. Here's an obituary by David Menconi in the News & Observer in Raleigh, N.C.

I was fortunate enough to see Doc play in person twice -- once in the early '70s at Popejoy Hall at the University of New Mexico, then again about 10 years later at the Line Camp in Pojoaque. I was freelancing for The Santa Fe Reporter and got to interview him that time.

The two main things I remember about that interview were:

1) Doc was pissed off because his opening act was a country rock band. Playing just with hisi son Merle, Doc didn't like having to follow a dance band -- though nobody in the audience that night seemed to mind; and 2) He didn't want to do the interview in his dressing room, which was kind of noisy, so we went outside to his car. He gave me lots of time, telling his life story and his opinions on music and whatnot. Trouble is, it was completely dark out there -- Doc was blind, remember -- so my notes were worse gibberish than usual. I was lucky to salvage a few quotes.

I'll play a set of Doc songs on The Santa Fe Opry Friday night (10 p.m. to midnight Mountain Time) on KSFR. In the meantime here's some videos of the man doing what he did best.