A version of this was published in The Santa Fe New Mexican
May 11, 2012


The Minutemen rightfully hold a high position in the indie-rock pantheon. Their story has been told in song and legend — as well as in the dandy 2005 documentary We Jam Econo. The trio from San Pedro, California, mixed a weird modern jazz sensibility with their punk rock soul and created a refreshing, if sometimes perplexing sound. The band also provided a good argument against the stereotype of punk rockers not being able to play their instruments. 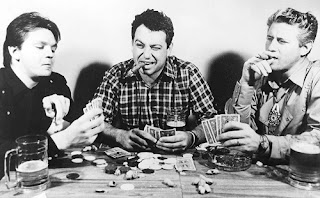 Like their songs, which, for the most part, lasted for less than a minute each, the Minutemen’s career was also abbreviated. Just five years after their first record on the SST label (the EP Paranoid Time), singer/lead guitarist D. Boon was killed in a car crash.

However the band formed by surviving Minutemen, bassist Mike Watt (these days playing with Iggy and the reconstituted Stooges) and drummer George Hurley isn’t nearly as revered. In fact, fIREHOSE is often viewed in the collective rock consciousness as a kind of a footnote to the Minutemen saga. fIREHOSE, which featured a young Minutemen zealot named Ed Crawford (billed as “Ed fROMOHIO”) on guitar and vocals, wasn’t as innovative as the original Boon-fronted group. But, as the new two-disc collection lowFLOWS: The Columbia Anthology (’91-’93) shows, fIREHOSE was nothing to sneeze at.

This collection includes both of the full-length albums that  fIREHOSE recorded for Columbia Records in the early ’90s, Flyin’ the Flannel and Mr. Machinery Operator, as well as a concert EP, Live Totem Pole and various other goodies. These records were from the era in which the major labels began snatching up the cream of the indies. Warner Brothers grabbed R.E.M., The Replacements, and Hüsker Dü. Elektra nabbed The Pixies, and Geffen got Nirvana, the Butthole Surfers landed on Capitol, and Columbia lured fIREHOSE.

OK, so Firehouse wasn’t the Minutemen. But Flyin’ the Flannel had some stout-hearted rockers, starting off with “Down With the Bass,” which shows off Watts’ instrumental prowess. “Losers, Boozers, and Heroes” is a weird dirge with Celtic overtones that owes a debt to Fairport Convention. It’s also more than five minutes long, which undoubtedly caused some consternation among Minutemen purists. “O’er the Town of Pedro” has a crazed Hüsker Dü energy.

But perhaps my favorite fIREHOSE song of all time is “Walking the Cow.” It’s a cover of a song by mad Austin genius Daniel Johnston. Sung understatedly by the gruff-voiced Watt, it’s breezy and jazzy. The lyrics — like most of Johnston’s best — are strange, (what does he mean he’s walking a cow?) and drenched with sadness and doubt.

Mr. Machinery Operator was recorded during the final days of fIREHOSE, released just a few months before the musicians finally called it quits as a band. Several tracks here — the slow-moving “The Cliffs Thrown Down, for instance, or the sludgy “Quicksand” — sound like a band winding down.

But with Dinosaur Jr.’s J. Mascis producing, it’s no surprise that it’s nice and noisy with flashes of brilliance. I had to check the credits to be convinced that Crawford’s song “Blaze” wasn’t a Dino Jr. cover. Mascis’ background harmonies on this track remind me of Dinosaur’s quasi “hit” of the same era, “I Don’t Think So.”

Besides his own voice and guitar, Mascis brought in other musical guests. Nels Cline (of Wilco) plays guitar on “4.29.92,” a wild and primitive instrumental, and ex-Bangles Vickie Peterson sings background on “Witness.” But best of all is an unknown but powerful belter named Freda Rente, who sings lead on “Hell Hole,” which sounds like an update of early-’70s soul.

Actually my favorite part of this anthology is Live Totem Pole. There are some classic Watt tunes here (the ultra funky ”Makin’ the Freeway” and “What Gets Heard”). And there are some worthwhile covers, too — the best being Blue Öyster Cult’s “The Red and the Black,” an early Public Enemy song “Sophisticated Bitch” (yo, Ed fROMOHIO raps — and he sounds like a proto-Gluey Brother), and “Revolution (Part 2),” a Butthole Surfers tune best known for the closing chorus where the singer repeats the name of comedian Gary Shandling.

So maybe Firehouse will never get its own documentary, but these road dogs made some fine and usually interesting music during their day.

While it’s nice that Sony has re-released these records in an attractive package, if you’re a new fIREHOSE fan, you should realize that the group’s earlier work — the albums Ragin’Full On, If’n, and fROMOHIO, as well as the EP Sometimes all are on SST’s website. 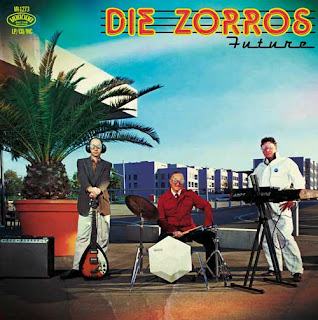 * Future by Die Zorros. This band is one of the most innovative projects involving the unstoppable Reverend. Beat-Man. The head honcho of Berne-based Voodoo Rhythm Records (I’ve heard he has a Swiss bank account) is the “only the drummer” for this band — which includes Olif M. Guz on electric organ and guitarist Patrick Abt. But evidence of Beat-Man’s crazy musical vision is scattered everywhere.

Die Zorros, which before now hadn’t released an album since 2002’s History of Rock Vol. 7, specializes in instrumentals, including some versions of well-known hits put through a Bizarro World/exotica/Muzak filter. Among the tunes you might recognize here are Amy Winehouse’s “Rehab,” (retitled “No, No No”), “Paint it Black,” “Nights in White Satin” (which starts out with a reggae beat), and the Beatles’ “Day Tripper” — though the group chants “tax man” through the verses, and it features a guitar riff from “She’s a Woman.” Die Zorros call the song “Walrus Eats Taxman.”

Along with the covers, there are some original tunes too, such as the exotic “Zorros in Afrika” and “Meek My Joe,” a tribute to the late British producer whose otherworldly touch colored “Telstar” and other early-’60s hits — and a major influence on the Zorros’ sound.

My favorite here though is an iggly squiggly version of the old schmaltz classic “Feelings,” on which Die Zorros sound like evil aliens who have conquered a retirement home cocktail lounge.