TERRELL'S TUNEUP: Joey is Back!

A version of this was published in The Santa Fe New Mexican
June 1, 2012


Joey Ramone is back! There’s no stoppin’ this cretin from hoppin’! Ten years after his previous solo album, 11 years after his death, and 16 years after the breakup of the Ramones, Joey’s still beating on the brat with his new smash record, ... Ya Know? 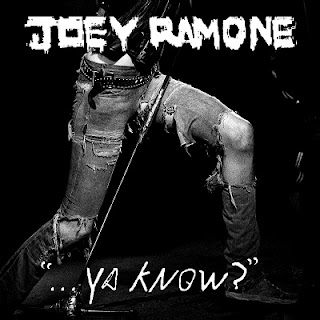 OK, so much for my audition as a late-night TV record hawker. But this isn’t just a K-tel parody. There really is a new posthumous Joey Ramone record, a follow-up of sorts to 2001’s Don’t Worry About Me.

Like that album, ... Ya Know? has high spots, several throwaways, some songs that’ll make you laugh, some that’ll make you sad — though nothing on the new album will strike your emotional chords nearly as hard as Joey’s goofy but sincere cover of “What a Wonderful World,” which appeared on the previous record.

And no, nothing here matches the power and the glory that was the Ramones, who weaved together sonic threads from sources like The Trashmen, The Ronnettes, and The New York Dolls, spinning a fast, furious, and funny sound that changed the face of rock ’n’ roll — even though they never came close to the commercial success they deserved and desired.

Ramones flashback: I only got to see them once.

It was at the 1996 Lollapalooza in Phoenix. The show was held at a dusty, sun-parched snake pit called Compton Terrace. The Ramones took the stage and played a few of their tunes (for some reason, the one I most remember was the “Spiderman” theme).

In introducing the song “Pet Sematary,” Joey joked that Compton Terrace was built on an ancient pet cemetery. Shortly thereafter, dark clouds gathered and brutal winds began to blow. Stage lights and speakers suspended above the stage began to sway violently. I had frightening visions of Joey, Johnny, and the rest being crushed by giant speakers. But the band left the stage before that could happen. And they never came back, and after the Lollapalooza tour, the Ramones broke up for good.)

Back to the present: The driving force behind ... Ya Know? was Joey’s brother Mickey Leigh. He assembled a bunch of Joey’s demos and home recordings — some going back decades — in various states of evolution — some reportedly consisting of only vocals and drums. Leigh took the tapes to several producers and twisted the arms of some of Joey’s musician friends to overdub.

Among the musical contributors on the album are Joan Jett, Handsome Dick Manitoba and Andy Shernoff of The Dictators, Lenny Kaye, Steve Van Zandt, Genya Ravan, Plasmatics guitarist Richie Stotts, Cheap Trick drummer Bun E. Carlos, and Holly Vincent of Holly and the Italians, who does a soulful duet with Joey on the Phil Spector-soaked “Party Line.”

Considering the patchwork of material here, the sound on ... Ya Know? is remarkably consistent.

There are a few songs that I have no trouble imagining the Ramones performing. “21st Century” is just a dumb rocker — the Ramones were masters of dumb rockers — in which Joey repeatedly sings about how much he wants some young woman. “I want you in the evening when the moon is full/ I want you in the morning, baby, when you’re off at school.” Similarly, “Eyes of Green” is a song of unrequited lust. The best lines are, “She’s dark and twisted like me/A creature of intrigue/She’s  something that you don’t forget/An ax murderess I bet/And I want her, I want her.”

Talk about dumb Ramones fun, “I Couldn’t Sleep” is irresistible. It owes obvious debts to early-rock classics like Bobby Lewis’ “Tossin’ and Turnin’” and Little Richard’s “Slippin’ and Slidin’,” but somehow Joey makes it all his own.

Then there’s “Seven Days of Gloom,” featuring a Stooge-like guitar riff and a chorus in which Joey repeats, “I’ll never be happy.” But, like so many blues songs, the melody and the energy of the tune belie the lyrics. Joey’s professional frustrations surface in “There’s Got to Be More to Life,” another crunching rocker, in which he sings, “There’s got to be more than MTV and fighting with the record company.”

Another song you can imagine the Ramones doing is “Merry Christmas (I Don’t Want to Fight Tonight).” Come to think of it, the Ramones did do that song, on their Brain Drain album in 1989. This version is radically different, however. It’s slowed down and has a 1950s feel. You can almost envision Joey dueting with Johnny Ace at the annual Rock ‘n’ Roll Heaven Christmas party, perhaps done as a medley with The Casinos’ “Then You Can Tell Me Goodbye.” 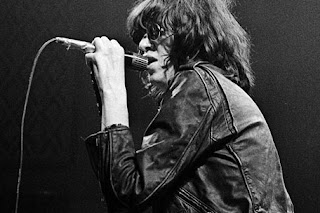 As I said earlier, there are some duds on ... Ya Know?. “Rock ’n’ Roll Is the Answer,” which, unfortunately, opens the album, sounds like warmed-over Bachman-Turner Overdrive. “New York City” could easily be turned into a jingle for a tourism commercial. On “What Did I Do to Deserve You” Joey sounds like a Tom Petty impersonator.

“Make Me Tremble” makes me cringe. With its acoustic guitar and its opening lines, “Sitting on a mushroom out in the woods/I say now baby, baby, you make me feel good,” this could be Joey’s ode to the back-to-nature singer-songwriter movement of the early ’70s.

Another acoustic number here is the closing song, “Life’s a Gas.” This pales in comparison to “What a Wonderful World” as a Joey Ramone life affirmation. Still, I’m not so hard-hearted that I’m untouched by it.

Some critics have complained that ... Ya Know? is nothing but misplaced nostalgia and is an affront to the punk-rock spirit that Joey Ramone helped create.

I’ve got mixed feelings about that. (Don’t forget that punk rock itself had a nostalgic aspect — wanting to wrest control of rock ’n’ roll from the “art” rockers and singer-songwriters and aging ’60s rock royalty to return the music to its crazy dangerous spirit.) While some of these songs could have remained in the shoe box, there’s enough good material on the album to make me happy it was released.