The Misery Jackals, a band from Akron (home of Devo), Ohio, is part of a new crop of acoustic “underground” country bands with one foot in bluegrass and another foot, and possibly additional body parts, in punk rock. Other such outfits sprouting up include The Calamity Cubes, The Dirt Daubers, Honky Tonk Hustlas, Black Jake & the Carnies, and Liquor Box. 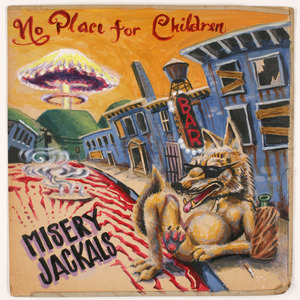 But of all these, the Jackals may be the only band with built-in legal representation. Banjo picker and Jackal mastermind Bill Corgan (no, not the guy from The Smashing Pumpkins) is a practicing lawyer. That might come in handy for a band on the road. And on the road the group is. The Misery Jackals pull into Santa Fe on Wednesday, May 23, for a show at The Underground at Evangelo’s with Española’s revered Imperial Rooster.

And there, hopefully, the Jackals will be hawking their devilishly delightful new album, No Place for Children, which they recorded earlier this year. This album is a follow-up to the band’s first effort, EP, which made me a fan a couple of years ago.

Packed into EP’s modest seven-song package are a lighthearted ode to roller derby; a tribute to/parody of top Midwestern underground-country hero Slackeye Slim (“He eventually acquired a taste for hot dogs and human flesh”); a gut-wrenching tale of a crack addict who’s just spent his baby-formula money on drugs; a theme song explaining the name of the band (“I’m a misery jackal, and on yer pain I feed/Cause I’m a misery jackal, I love to watch you bleed”), and more.

Happily, the new album is even better. Corgan’s twisted humor is evident on most of the tracks.

My immediate favorites include “Liquor and Whores” (a hillbilly sleazoid version of “My Favorite Things”); “Mudflap Girl,” a truck driver’s homage to the silver naked lady seen on the back of 18-wheelers throughout the country; a minor-key cautionary tale of a legendary creature — perhaps Ohio’s answer to the jackalope — called “Skunk Ape”; and “The Mortuary Bop,” which describes the secret pleasures of a woman who works in a funeral home.

But not all the songs are full of yucks. Like “Crack & Similac” from EP, “Patrick” is a sympathetic song about a drug addict who died at the age of 21. The Jackals are far less sympathetic to “Sick Rick,” a junkie creep.

Musically, the band seems to be getting tighter. It’s certainly not the first band to add drums to bluegrass (heresy for the bluegrass purist, though we don’t care much about purists at “Terrell’s Tune-Up”), but the MJs do it right.

They've got the bluegrass thing down, and the list of those who’ve influenced them seems to be expanding. I never understood why they mention Gogol Bordello as an influence until I heard “My Family,” the opening track of No Place for Children, as well as the album’s “Josephine” and the accordion solo on “Pirates of the Northcoast’ — all of which show a kinship with Gogol’s “gypsy punk” sound.

The Jackals also show an appreciation of Mexican music with “La Muerte por el Perrero,” which Corgan sings in Spanish. And are those mariachi horns I hear at the end of “Patrick”?

The Misery Jackals with The Imperial Rooster are playing at 9:30 p.m. on Wednesday, May 23, at The Underground at Evangelo’s, 200 W. San Francisco St. Cover is a mere $5.


And if you’re in Albuquerque the night before, the Jackals are playing at Blackbird Buvette, 509 Central Blvd. N.W. beginning at 9 p.m. 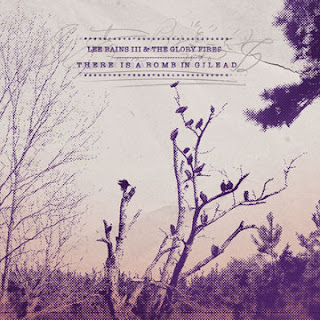 *  There Is a Bomb in Gilead by Lee Bains III & The Glory Fires. I have to admit, the first thing that attracted me to this album was the title — an irreverent play on the title of an old gospel hymn, recorded by Mahalia Jackson and countless others.

This first album by this Alabama band amounts to a new argument that Southern rock is not anywhere close to dying. True, Bains and company don’t have the powerful songwriting chops of that other Alabama group, The Drive-By Truckers, but they’re drawing on some of the same sources: Mussel Shoals soul, smoldering blues, sweet country songs and, of course, that first generation of wild-eyed Southern bands — the Allmans, Skynyrd, Marshall Tucker, Wet Willie, and the rest — who sounded the rebel yell back in the ’70s.

Gilead starts out with a smoky slow burner called “Ain’t No Stranger.” It’s an intriguing little tune that sounds like a long-lost lilting Howard Tate song on the verses that builds up to loud guitars and intense drums on the choruses.

But I prefer the next song, “Centreville,” which thunders from start to finish. Bains starts off with some healthy class warfare: “If you hear any bleedin’ it’s me and the boys/We’re overeducated and we’re underemployed.” The rage never stops. Other sturdy rockers include “The Red, Red Dirt of Home” and the South’s-gonna-rise-again blast of “Magic City Stomp.”

One standout on this album is “Everything You Took.” It’s a bitter little breakup song in which Bains tells a former girlfriend, “Go on keep my T-shirts/Well you can go on keep my books.” But I’m not quite sure I believe the second half of the refrain: “Each small hope that you give me/Makes up for everything you took.”

There are some good pretty numbers too. “Reba” is a country love song, and “Opelika” is a sweet soul tune that hints at country — the kind of song for which Dan Penn is known. “Roebuck Parkway” is a minor-key folkie-sounding tune in which Bains is accompanied only by acoustic guitar.

The album ends with the title song, which, not surprisingly, has a lot of gospel in it. With a piano as the main instrument, Bains sings most of it in a soulful falsetto. Try to listen to the chorus of this tune without thinking of The Faces.

On Bains & The Glory Fires’ next album, I’d like to hear a few more “Centrevilles” and a little less “Roebuck Parkways.” But I do want to hear more from Lee Bains.