Note: This week's Terrell's Tuneup got held because of so much stuff from Santa Fe Indian Market. (Please don't cancel your subscription!) So instead I'll run my monthly eMusic reviews, which I was going to post this weekend anyway, now. 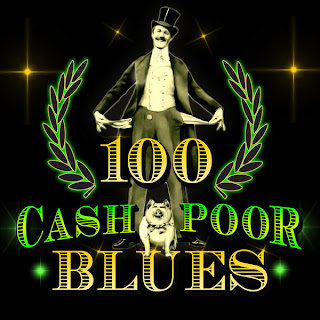 But the overriding themes of all -- well most -- of the  100 songs is money -- or the lack thereof. That's been one of the major themes of the blues since Day One. "I'm broke and I ain't got a dime," Blind Willie McTell sings in "Last Dime Blues." He sounds like he knows what he's talking about..

Both Gus Cannon and Barbecue Bob sing versions of "Poor Boy, Long Ways From Home" Different arrangements, some different lyrics, but they both come from the same place of the spirit. Same with "Broke and Hungry Blues."  One version here was recorded in 1929 by Peg Leg Howell (and an unknown fiddler), while another is a 1947 take by blues pianist Big Maceo Merriweather (with his pal Tampa Red on guitar.)

Not all is desperation here though. Even the above songs have and underlying humor. And Big Bill Broonzy even makes joblessness sound kind of fun in his late '30s "Unemployment Stomp." (featuring an irresistible trumpet by aa guy named Punch Miller) And I'm not even sure what the risque "Sales Lady" by Casey Bill Weldon is even doing on this collection, but it sure is fun.

Some highlights here include  The Harlem Hamfats' "Weed Smoker's Dream," a 1936 song that eventually evolved  into "Why Don't You Do Right?"; Slim Harpo's "I Need Money ("Keep Your Alibis"); "Price of Cotton Blues" by The Allen Brothers (one of, if not the only white act here. There's a snazzy kazoo on this tune that makes it sound like a jug band song); "Lightning Struck the Poorhouse," a jazzy tune by someone called Cousin Joe; and "Working Man Blues," where Lonnie Johnson complains about hard working Joes like himself wearing themselves out "while the pimps have all the fun." 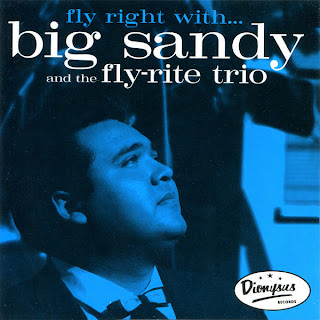 * Fly Right With Big Sandy & The Fly-Rite Trio  I was so impressed when I saw Big Sandy & His Fly Rite Boys in Santa Fe recently that I came home and downloaded this album.

This is Sandy's first album, originally released back in 1990. But the singer born Robert Williams has stayed true to this basic western-swing influenced rockabilly sound -- with R&B and Latin overtones.

And in fact, Sandy and the Fly Rite Boys still perform  some of these songs. They did "Hot Water" at Santa Fe Sol, and maybe even some of the others.

As is the case with his current band, Sandy's trio here performed flawlessly on this album. But, agasin just like now, the main draw is Sandy's high, smooth vocals. Sure he'll let out some screams in rockers like "Baby You Done Gone, but the man knows how to croon. 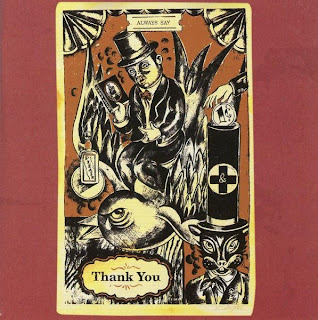 Indeed, strange religious obsessions and spiritual yearnings, not all of them healthy, dominate Cessna's material on this, the group's second album, just like their most recent album, last year's Unentitled.

In Cessna World, almost everything is seen through lenses of sin and salvation. The very first words on the album, after about 20 seconds of  circus-waltz pumping on an accordion and a little doo-wop vocal action , are "Wash all my sins away / I'm down on my knees to pray ..." But before the end of the first verse you realize that the song "In My Arms Once Again" actually is about a woman.

Cessna finds spiritual wisdom in unlikely place from unlikely sources.  In "Viceroy Filter Kings, a good honky tonk stomper with a rightfully obnoxious steel guitar, Cessna sings of an old man he meets in a bar, talking and crying about his wicked past. But the old drunk codger relays some reassuring advice: "I ain't a Catholic, I ain't a Protestant, I ain't a Jew. You know sweet Jesus He died, He died for my sins and He'll die for yours too."

There's another barroom encounter in "Last Song About Satan." Guess who Slim meets here ... "Lucifer you piece of shit, I should kick your ass right where you sit,"

The album climaxes with "Hold My Head"  a lengthy saga that starts out as some kind of parable, and ends with six minutes of a jubilant repetition of the band singing "Hold, hold my head ..." 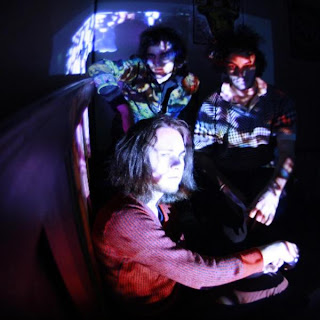 * Night Beats  This is a band I discovered when fooling around on eMusic one night checking out some of the stuff the site had recommended for me. About 75 percent of the stuff eMusic "personally recommends" for me is mediocre and about 24 percent is raw crap. But this album is part of that glorious one percent that makes me happy.

This trio specializes in a garagey, quasi psychedelic guitar/bass/drums sound. They're from Seattle. (What could possibly go wrong?) but their hearts are in the Texas/Haight Ashbury sounds of The 13th Floor Elevators. The Night Beats song "Useless Game," for example owes much to The Elevators' "Earthquake." And speaking of Texas, they've recently toured with The Black Angels.

Most of their songs are in the two to three minute range, though they stretch out on couple of tunes, such as "The Other Side" which slows down a couple of times for, smokey Spanish-flavored  instrumental sections But my favorites are the first two tracks, the loud, brash and snotty "Puppet on a String," (no not the Elvis song from the Girl Happy soundtrack), which is followed by "Ain't Dumbo," which has echoes of  The Count Five's "Psychotic Reaction."