A version of this was published in The Santa Fe New Mexican
Aug. 3, 2012 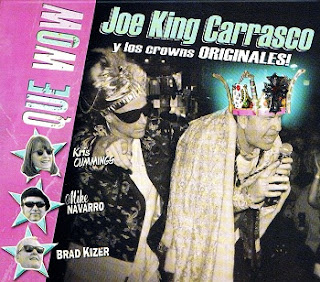 Seeing Joe “King” Carrasco & The Crowns — the original Crowns, by golly! — kicking off the Santa Fe Bandstand series in July brought back a lot of memories from 30 years ago. But their performance that night, as well as Que Wow, the new CD I bought after the show, was not mere nostalgia. Carrasco’s music is as timeless as it is fun.

Back in the day — the early 1980s to be exact — the group called this sound Nuevo Wavo.

Carrasco and the band seemed to come out of nowhere right about the time New Wave was starting to fade. Elvis Costello had repopularized the Farfisa/Vox organ sound a few years before (on his album This Year’s Model), but Carrasco, keyboardist Chris Cummings, and the others took it further, creating spirited music that sounded like a joyful blend of The B-52s and Question Mark & The Mysterians.

Carrasco was just a gringo loco (born Joseph Teutsch in Dumas, Texas), but his love for Tex-Mex music and Chicano rock in general propelled his Nuevo Wavo sound.

Carrasco and The Crowns seemed to be everywhere for a brief moment. They played “Don’t Bug Me Baby” on Saturday Night Live. Later, “Party Weekend” became a staple on MTV. Carrasco was interviewed in Rolling Stone. After a chance meeting at a recording studio, he did a duet with (pre-Thriller) Michael Jackson.

And for a few years it seemed he was at Club West in Santa Fe at least every few months. He was the one of the first national acts, if not the very first, to play there, treating local folks to his crazed, high-energy, hopped-up, crowd-surfing, wall-crawling antics in a stage show that was part James Brown, part Sam the Sham, and part Spider-Man.

Truth is, Carrasco and The Crowns became more of a regional phenomenon. Here in the Southwest, we still loved them long after the trendies and the mainstream forgot about them.

But at some point Carrasco’s Santa Fe appearances became more and more infrequent. It seemed as if he dropped off the face of the earth.

Actually, he moved to Mexico, where he established a home base in a Tex-Mex restaurant/bar in Puerto Vallarta called Nacho Daddy. That’s also the name of one of the songs on Que Wow. (No, this bouncy ranchero featuring Carrasco’s dogs barking in the background is not an advertisement for the restaurant.) Carrasco started getting a little political in the mid ’80s with songs like “Who Buys the Guns” (“that killed the nuns” completed that couplet; he lived in Nicaragua for a while during that period). But a quarter century later, if there’s any trace of politics on the new album, it’s so subtle that I missed it.

A snappy little rocker called “Drug Through the Mud” opens and closes Que Wow, the final version being a live one. Cummings’ electric organ plays riffs straight off of “96 Tears” (Carrasco name-checks the Question Mark hit in the lyrics). Meanwhile, another one of Carrasco’s chief influences, the Sir Douglas Quintet, is righteously evoked in (at least) a couple of other songs, “Havin’ a Ball” and the bilingual “Yo Soy Tuyo.”

Carrasco reached back into his songbook for a couple of tunes here. Both “Bandido Rock” and “Pachuco Hop” have appeared on previous albums, but both are excellent tunes that deserve to be heard again. (On YouTube, thanks to Santa Fe Music Video, you can find a good quality video of “Bandido Rock” from the band’s appearance on the Plaza last month.)

If you dug Carrasco’s show on the bandstand (or his subsequent shows in Los Alamos, Taos, or Albuquerque), or if you missed him this time but have great memories of his Club West performances, I’d bet you’d love Que Wow.

* The Angel Babies. This is a band with New Mexico roots that rose out of a rough night of karaoke. 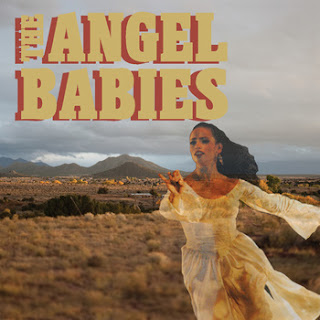 As the band explains in its official bio, one night last year Frankie Medina and Calida Salazar were hanging at a “rough karaoke bar” at an unnamed location in New Mexico, when “suddenly a ex-con/pachuco took the stage and blew them away with his kitschy performance of ‘Billy Jean.’ ” The tough-guy crooner became violent, the story goes, when he insisted that the song “Angel Baby” — which some refer to as the national anthem of the South Valley — be cued up for his next number.

“Unfortunately he was arrested,” the band’s bio says. But, inspired by this experience, Medina and Salazar decided they wanted to make music together as The Angel Babies.

Medina is a New Mexico native, born in Santa Fe and raised in Española. I first became aware of him in the late ’90s through his band Electricoolade, a cool little two-man show that played a potent blend of power-pop and garage rock. After that, he moved to Austin, forming a band called The Kill Spectors before The Angel Babies took wing.

This self-titled album is a real sonic pleasure. It starts off with what sounds like a Mexican folk song, with Medina singing and playing acoustic guitar. But this song lasts only a little more than a minute before a big throbbing electric fuzz bass riff comes in, then some thunder drums on “Tone Deaf.”

When the guitar joins in, the song sounds like a slowed-down Canned Heat boogie, except way more ominous. Medina and Salazar’s harmonies here remind me of another Austin couple from a previous era — Timbuk3.

What I like about the The Angel Babies is that while they aren’t shy about using synthesized sounds, they’re a rock ‘n’ roll group at heart. “Drugs Guns Hookers” and the more upbeat “Red River Street” are upstanding examples of good trashy rock ‘n’ roll performed through an electronic filter, while “After the Party” sounds like a long-lost Prince song, perhaps from the Sign ‘O’ the Times era.

The album ends with a song, sung by Salazar, called “Angel Baby.” It’s not the same song that the guy at the karaoke bar wanted. It’s as pretty as it is dark.


And here's a song by The Angel Babies