A version of this was published in The Santa Fe New Mexican
Aug. 31 2012

You might think that a trio consisting of a crazy slide guitarist, his wife on the washboard and his cousin playing a bass drum and junkyard percussion might be little more than a fun little novelty act. But those who have enjoyed the recordings and/or the live shows of The Reverend Peyton’s Big Damn Band, know that this group from rural Indiana goes way beyond the novelty spectrum. 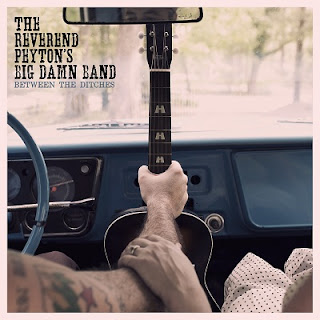 And cementing the deal is the Rev’s impressive lyrical skills, highly evident in the band’s new effort Between the Ditches. He’s not “poetic” in the traditional sense. Nobody’s going to mistake him for Leonard Cohen. He’s closer to Woody Guthrie — Woody Guthrie with crazy rhythm.

Peyton’s songs can be funny, poignant, much like the country bluesmen he emulates. He’s got a knack for taking everyday observations and annoyances — like, say, bugs getting into the house when someone leaves the door open — and turning them into romping, stomping singalongs.

Ditches represents a return to form for the Big Damn Band following last year’s Peyton on Patton, a tribute to Delta blues great Charlie Patton. Although the album was credited to The Reverend Peyton’s Big Damn Band, basically it was a Josh Peyton solo album with Mrs. Peyton and Persinger making only minimal contributions. I missed them on that one. But the new record is charged up with all the thump, crunch and rumble of the full band. This album picks off where Peyton’s last album of original material, 2010’s The Wages, left off. Like that previous effort, Ditches is full of bluesy, populist-themed songs about economic hard times and social decay.

“Shake ‘em Off Like Fleas” — the music of which sounds like “Polk Salad Annie” overdosing on gamma rays — is full of righteous rage against corrupt politicians, soulless corportations and other powers-that-be who rig the game against the rest of us. “A change is coming, a change in store / ‘cause there’s more of us than them and we’ve freed ourselves before,” Peyton sings.

The gentler “We’ll Get Through” definitely is the prettiest song on the album. The narrator of the song has been hit hard by the “tough times and tough timing,” but like Merle Haggard in the song “Someday We’ll Look Back,” he reassures his loved one that it won’t always be so bad

Some of the songs suggests images of displaced workers going down the road feeling bad, seeking better lives but finding mostly “cops and thieves and sons of bitches,” as Peyton growls in the refrain of the title song. In this song, Peyton warns, “The code of the road is take care/ The law can’t protect us out there … The code of the road is to share/ We have only each other out there.”

Meanwhile the song “Move Along Mister” — a slow song with Peyton’s slide evoking early Ry Cooder — is about a late-night confrontation between a worn-out, perhaps vagrant, traveler and an unfriendly cop. “I’m weary and hungry and I ain’t from around here, ” the singer tries to explain.

Other topical songs here include, “Don’t Grind it Down,” a protest against strip mining. In a melody similar to “Wabash cannonball,” Peyton sings, “If we lose our mountain and with it all them trees, I don’t know about you, I think I’d rather freeze.”

Then the Rev preaches against drugs on “The Money Goes” Where does the money go? “Up her nose,” of course. In a later verse he repeats the line “Looks like death” several times before adding, “Might be meth.” But Peyton and band know how to have good fun too without making serious socio-economic points. “Brokedown Everywhere” is an update of the country classic “I’ve Been Everywhere.” Peyton alludes to that song in the refrain: “You’ve been everywhere / I’ve been broke down there.” Like he the old song, the singer lists several geographical locations, but describing his car troubles in every one. “South of Portland lost a wheel/ New York City broke the seal/ Nevada an alternator/ Memphis a radiator … “

For those already familiar with the band, there aren’t that many musical surprises on Between the Ditches — except perhaps the sweet mandolin in “Don’t Grind it Down.” Yet somehow on their seventh album, they’re only getting better. This just might be their best work yet.

Here’s something to look forward to: The Reverend Peyton’s Big Damn Band is scheduled to play at Sol Santa Fe on Nov. 16. Mark your calendar.
at August 31, 2012