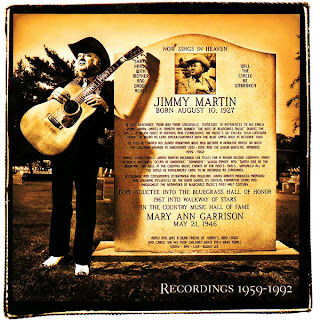 * Songs of a Freeborn Man by Jimmy Martin. When most casual bluegrass think of the classic performers of the genre, they usually think in terms of Bill Monroe, Flatt & Scruggs and The Stanley Brothers. But there's another name that belongs in that pantheon -- Jimmy Martin.

A veteran of Monroe's Bluegrass Boys -- and a longtime devotee of Monroe's music -- Martin, whether he meant to or not, infused a rock 'n' roll spirit into his music. Anyone who's enjoyed Junior Brown ripping through Martin's signature song, "Freeborn Man," could testify to that. Martin doesn't use any electric instruments on his version (or anywhere else here for that matter), but you can hear the blues in his soul and the growl in his voice.

This is hardly a collection of essential Martin recordings. The 25 tracks on this album, released after the turn of the century, are compiled from three different projects, according to Jon Weisburger in a No Depression review:

"... a late 1950s home recording of Martin and two of his greatest Sunny Mountain Boys (with bass overdubbed years later), a live album originally released in 1990, and an album of duets recorded in the early 1990s that may or may not have been sold at his record table for a brief period ....

One strange aspect of this album is that tacked on to the songs that begin and end the album is a snatch of a tune not by, but about Martin. It's Gary Brewer singing s "Jimmy Martin Songs for Dinner," a re-written version of Tom T. Hall's "Bill Monroe for Breakfast."

On the first track, the Brewer song and Martin's "Made in the Shade If a Tree Don't Fall" are separate by the outgoing message on Martin's answering machine that features the barks of one of his coon dogs. Later there's a song about "Pete the Best Coon Dog in the State of Tennessee."

One of my other favorites here is about another one of Martin's animals, "Jimmy's Mule" which features some world-class hee-hawing by Martin.

There's not a bad track on here, although there's a few too many over-covered bluegrass standards here for my own tastes -- "The Sunny Side of the Mountain," "Molly and Tenbrooks," the obligatory "Will the Circle Be Unbroken" etc. Of course Martin does all of these justice. And his version of "Little Maggie" is just wonderful. 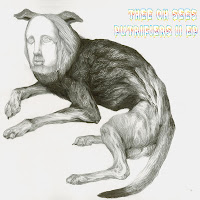 * Putrifiers II by Thee Oh Sees. I only became a fan of this San Francsco group earlier this year when I saw them on the same bill as The Gories and Kid Congo Powers & The Pink Monkeybirds in Austin during South by Southwest. With both a male and female vocalist (John Dwyer and Bridget Dawson), they're a cool blend of garage pop with some almost Black Angel-like psychedelic overtones. You might even hear some overtones of Yo La Tengo.

Soon after seeing them, I downloaded last year's Carrion Crawler/The Dream, which verified my first impression of Thee Oh-Sees as a band I wanted to follow.

However, this one, their latest album, released in September, is something of a disappointment. No, it's not bad and it starts out strong with a couple of fuzzed-out rockers, "Wax Face' and a glam-rock contender called "Hang a Picture."

Later on there's some fine treats like "Flood's New Light" (a song showing the influence of '60s soul) and "Lupine Dominus," which, after 25 seconds or so of a piercing organ note and electronic sputtering, breaks into a high-powered romp that sounds like the work of a rock 'n' roll cargo-cult that worships The Beatles' Revolver.

If the rest of the album was half as impressive as "Lupine Dominus" I wouldn't be complaining . Unfortunately too many of the remaining songs are anemic. There's the plodding title song; the dreamy flower-power reminiscent "So Nice"; and, speaking of The Fab 4, "Wicked Park" sounds like Dwyer and Dawson imitating Robyn Hitchcock imitating The Beatles.

I have to admit that I've come to enjoy "Will We Be Scared," which sounds like a girl-group era tune performed by Martians.

So I'm not giving up on Thee Oh Sees. I just hope they pick up the pace on their next reccord. 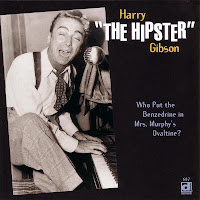 * Who Put the Benzedrine in Mrs. Murphy's Ovaltine? by Harry "The Hipster" Gibson. I've got Ronny Elliott to thank for sparking my interest in this proto rocker. So I'll give Ronny the task of explaining the story of the man born Harry Raab, who had played piano for Dizzy Gillespie, Charlie Parker, Billie Holiday, and other greats. (from Ronny's song "Handsome Harry the Hipster." on his album I've Been Meaning to Write.)

“In the ’40s, Harry began pumpin’ up the rhythm, and tearin’ up the keyboards,” Elliot drawls. “With rollicking songs like ‘Handsome Harry the Hipster’ and ‘Get Your Juices at the Deuces,’ he was bringing hip Manhattan its first taste of rock ’n’ roll.”

Gibson in his songs sang about the joys of drugs. The title song of this collection, some say, got him "blacklisted" -- though I have to wonder whether it was his own drug habit that made it hard for him to find work in the late '40s and  '50s instead of evil censors -- whoever they were -- upset over that one funny novelty song. (I mean, hell, the song "Wacky Dust" hardly stunted Ella Fitzgerald's career. Cab Calloway did lots of songs about dope and he did OK.)

This album consists of material Gibson did in the '70s and '80s. Many if not most of the songs are dope humor that make Cheech & Chong seem sophisticated. The first words out of his mouth on the opening track "Hey Man! You Just Mde My Day" are "I'm the kind of guy who likes to get high on reefer, hash and snow." Then there's "I Flipped My Wig in San Francisco" and "I Want to Go Back to My Little Grass Shack" (Grass! Get it?)

But there's something irresistible about Harry the Hipster , especially on the songs where he's backed by a tasty little jazz combo. And the 7-minute THC-laden shaggy-dog tale "Me and Max" can't help but remind you of those long hilarious stories Tom Waits told, to similar musical accompaniment, on Nighthawks at the Diner. 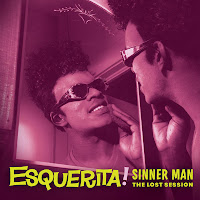 * Sinner Man by Esquerita. This album comes from sessions recorded in New York City in 1966. Esquerita sings and plays piano and organ, sometimes switching back and forth during the course of a song. He’s accompanied only by a drummer, whose name has been lost to history.

The fiery eight-minute title track that opens the album (there’s also a shorter version later) should be required listening for any student of soul music. Inspired by Nina Simone’s take on the old spiritual, Esquerita pounds the piano as frantically as his drummer pounds the skins. He sings “Running to the Lord/He told me to go on to the devil” like someone who had just had that conversation a few minutes before. And when he sings “Went to the devil/The devil he was waiting,” you can almost smell the brimstone.

Sound familiar? I reviewed this in Terrell's Tune-up not long ago. CLICK HERE to read the full review.
at December 21, 2012