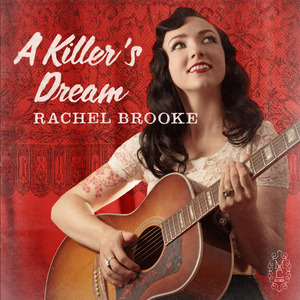 I was afraid that there was no way Rachel Brooke’s new album, A Killer’s Dream, could live up to her previous one, Down in the Barnyard. I was correct in thinking that the new one would be a lot different from Barnyard.

But my fears were for naught. The new album is just as good if not better than her earlier effort.

Brooke’s previous albums have mostly been acoustic affairs. On her new one, a lot of the songs feature the sweet-voiced Michigan country singer backed by a Florida group called Viva Le Vox. The band gives her sound heft, and Brooke gets the opportunity to rock and even strut. Together they do a creditable version of a Fats Domino song, “Every Night About This Time.”

When I reviewed Down in the Barnyard a couple of years ago, I called Brooke the “Wednesday Addams of country music,” because, despite her innocent-sounding voice and her pretty melodies, her lyrics reveal a dark, spooky side and are full of stories of murder, violence, vengeance, and all the things that make American folk music — real folk music, not the watered-down stuff too many people think is folk music — the deep, mysterious force it is.

The lyrics of the new album aren’t quite as violent as those on Barnyard, but there are still plenty of dark corners. The song “Serpentine Blues” opens with Brooke singing, “I had a dream last night, a big black rat in my bed.” Spookier still is a tune called “The Black Bird,” in which she explores the paranoia prompted by forbidden love. “Fox in the Hen House” sounds like an easygoing blues tune, but by the end of the song Brooke is threatening her romantic rival with a firearm.

For this album Brooke rerecorded a couple of songs from an acoustic EP she released earlier this year. Personally, I like the new versions of “Late Night Lover” and “Ashes to Ashes” better. Both feature a sleazy sounding trumpet, while “Late Night Lover” also has an uncredited musical saw — or at least something that sounds like a saw. You might think it’s a torch song from another planet.

The most emotional song here is “Old Faded Memory,” a duet with a guy named Lonesome Wyatt (from the band Those Poor Bastards). This a melody that could be straight out of the 1890s. It’s a story of two elderly people, once a couple, separated by the decades, pining for each other.

“And with my last breath unto death may I stare/I’ll remember the life that we never shared,” Brooke sings. It’s sentimental, but it packs a punch.
^
Also recommended: 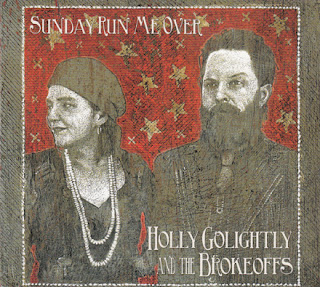 * Sunday Run Me Over by Holly Golightly & The Brokeoffs. For the past five years or so, British-born singer Holly Golightly and her partner, “Lawyer Dave” Drake, have quietly cranked out some of the most enjoyable country-soaked, devil-fearing blues-inspired rock ’n’ roll records you’ll find anywhere. These albums seemingly pop out of the soil of the couple’s Georgia farm like misshapen pumpkins or oversized zucchinis that look like Dick Nixon.

Golightly clearly loves the roots music of her adopted land, and she and Drake play it in an irresistibly irreverent way. Their latest album is an unmitigated joy.

Golightly is a protégée of English garage-rock renaissance man Billy Childish. If you haven’t heard Holly’s old band Thee Headcoatees, a ladies auxiliary of Childish’s Thee Headcoats, that’s your next assignment. One of the tunes here, a swampy stomper called “This Shit Is Gold” actually reminds me of Holly’s Childish days.

Sunday Run Me Over kicks off with “Goddamn Holy Roll,” an urgent gospel-infested rocker with some devilish slide guitar from Lawyer Dave. It’s followed by the slow, menacing “They Say,” another showcase for Dave’s slide. And this is followed by “Tank” — with some chicken-scratching lead guitar that sounds as if Jerry Reed has risen from the dead. “One for the Road” is a clunky-funky waltz that has echoes of vaudeville or English music hall songs.

While Golightly wrote most of the songs here, The Brokeoffs also do some wonderful covers. “I Forgot More” is a sad, sweet country tune made famous by The Davis Sisters (though I first heard it done by Johnny Cash in the ’60s).

Lawyer Dave steps out front to sing a hilarious take on an old Mac Davis novelty, “It’s Hard to Be Humble.”

(Involuntary flashback: back when I was a substitute teacher about 30 years ago, I overheard a girl at a local junior high talking to her friend say, “Did you see Mac Davis on TV last night? He sang the most conceited song!” Irony deficiency is a most tragic condition.)

The most subversive cover song I’ve heard lately is The Brokeoffs’ rewrite of Wayne Raney’s finger-wagging classic, “We Need a Lot More of Jesus (And a Lot Less Rock and Roll).” Golightly has retitled it, “A Whole Lot More …” and, true to her punk-rock heritage, basically reversed the sentiment, singing “We need a whole lot less of Jesus and a lot more rock ’n’ roll.”

The couple harmonizes, “You can read it in the morning paper, hear it on the radio/Christ has taken the nation, and we don’t all want to go.” I hope their neighbors in rural Georgia understand.

Herr is an Albuquerque singer who has a warble in her voice that may remind you of Chrissie Hynde.

A follow-up to her 2009 album Lullabies & Cautionary Tales, Americana Hotel is a collection of 11 original songs, plus one impressive drum-heavy cover of Bruce Springsteen’s “State Trooper.” Hopefully she’ll be doing this one on Saturday, as well as the title song and “Townes,” which may or may not be a tribute to the late Mr. Van Zandt.

And here's Holly Golightly & The Brokeoffs singing about the Rapture