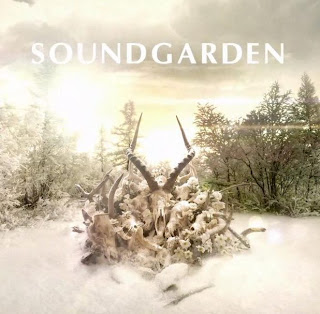 Years before Nirvana came to symbolize the Seattle sound — and something called “grunge,” a label that no “grunge” band actually embraced — a group called Soundgarden seemed perched to conquer the world.

It started out in the mid ’80s, recording on venerable independent labels like SST and, yes, Sub Pop. With a fresh metallic punch — too derivative, in the early days, of Led Zeppelin and Black Sabbath — by the early ’90s Soundgarden had evolved into a powerful musical force.

The band’s album Badmotorfinger, released in October 1991, was nothing short of a head-twister. With songs like “Rusty Cage,” “Jesus Christ Pose” and “Outshined,” it was metal, all right, and but it was metal hurling itself into exciting, unexplored directions.

But in what definitely was a case of bad timing, this album was released just after Nirvana’s breakthrough Nevermind, which (sorry) outshined Soundgarden’s album in terms of national attention and critical acclaim But then and now I believe Badmotorfinger was the superior album. And, in fact, I still like it even more than Superunknown, Soundgarden’s most popular album, which came out in 1994.

Soundgarden called it quits in 1997. But they’re back. The musicians reunited for some live shows a couple of years ago. And late this year they unleashed King Animal, an album of all new material. All hair-metal casino acts, nu-metal pretenders, indie-rock shoegazers, and emo wimps should flee in fear. This album, especially the first half, is a doozie.

If Soundgarden fans back in, say, 1999 could have heard King Animal, they probably would have been delighted, but they would not have been shocked. Thankfully, there’s no self-conscious effort to update the band’s basic sound. No fancy, zingy technological touches are noticeable.

Granted, there are some signs of maturity on this record. The band employs a little more acoustic guitar than it did in the old days on songs like “Black Saturday” and “Bones of Birds” (which reminds me of Temple of the Dog, an early 90s album that included Soundgarden members.) But singer Chris Cornell still wails — if not quite as loud as the old days. Kim Thayil’s guitar still leads the screaming life. And drummer Matt Cameron and bassist Ben Shepard are still one brawny rhythm section.

King Animal starts off, appropriately enough, with a rocker called “Been Away Too Long.” It’s the lament of someone returning to his hometown, though it’s hard not to see it as a metaphor about going back to a “town” called Soundgarden. “I’ve been away for too long/Though I never really wanted to stay.”

The next song, “Non-State Actor,” is also a pounder, with Cornell seemingly giving voice to some underground populist movement: “We’re not elected but we will speak/We’re not the chosen, but we believe/And we settle for a little bit more than everything.”

The thumping “Blood on the Valley Floor” is Soundgarden at its most Black Sabbath-like, while the opening strains of “By Crooked Steps” might remind you of early U2, until the entire band bursts in. The song starts out with Cornell singing about “stealing love” and declaring, “I’m a walking believer/I’m a ghost and a healer/I’m the shape of the home inside your mind.” That sounds nice and positive. But this ain’t no New Age ballad. The narrator soon reveals a harsher sider. “Blood raining down/Cuts a deep, deep river/And we’re diving.”

Let’s hope Soundgarden keeps on rowing through the murky river of modern music.

* Sideshow EP by The Frontier Circus. Here’s a four-song disc from a group I currently consider the best cover band in America. This is a nifty follow-up to the Conway, Arkansas, group’s debut album, A Little Bit Psycho … A Little Bit Western, released last year. That one featured the Circus’ feedback-drenched psychedelic/punk versions of songs by Johnny Paycheck, Jefferson Airplane, Wanda Jackson, and Roky Erickson, among others. My favorite there is a loud, grating mash-up of “A Horse With No Name” and “Cool Clear Water.”

They’re all good, but the best is the visionary take on the Lee Hazlewood-penned “Some Velvet Morning,” on which Dan sings both the Nancy and Lee parts while the guitars sound like a Martian attack. It sounds kind of funny when Dan sings “White men always called me ‘Indian squaw’” on Cher’s “Half-Breed,” but this is one rocking tune.

“All Tomorrow’s Parties” retains the folk-rock jangle of the Velvets’ original, and Campbell’s “Rhinestone Cowboy” is pure joy (even though my favorite cover still is local boy Joe West’s version.)

My only complaint is that this is a four-song EP and not a full album. This might just be a sideshow, but I’m looking forward to seeing what’s inside the big top for The Frontier Circus.

Enjoy yourself some videos:


And here's a little Circus music