I've gotten so far behind in this, I've actually got two months worth of eMusic downloads to write about this time. It's a long one, so hang on! (And don't miss the videos at the bottom) 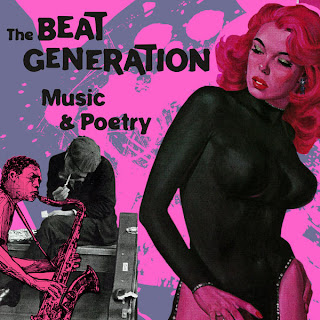 * The Beat Generation: Music & Poetry by Various Artists.  This is a massive collection -- 132 tracks that lasts more than nine hours. (All for less than $6 for eMusic members.)

It looks like a major chunk of the 3-Disc Rhino Records Collection The Beat Generation ended up here.

Like the subtitle says, there's music -- including classics by bop and cool jazz giants like Dizzy Gillespie, Charlie Parker, Charles Mingus, Miles Davis, Thelonius Monk,  Gerry Mulligan and more -- and there's poetry and other readings by the beat elite -- Jack Keruoac, Allen Ginsberg, William Burroughs, Lawrence Ferlinghetti ... And there's combinations of poetry and jazz that the beats were so noted. My favorite of these here being Kenneth Rexroth's "Married Blues," recited over a bluesy number by an unidentified jazz combo.

There's also Beat comedy including Lenny Bruce's "Psychopathia Sexualis," and the entire How to Speak Hip album by Del Close and John Brent (plus Close's Do It Yourself Psychoanalysis Kit.) There's a few songs poking fun at the crazy beatniks, such as Perry Como's "Like Young" and Bob McFadden & DOR's song "The Beat Generation." This song, written by Rod McKuen served 20 years later as Richard Hell's inspiration for the punk-rock manifesto "Blank Generation."

And there's several interviews with Beat icons and lengthy news features on the Beatnik phenomenon by journalists like Charles Kuralt and Howard K. Smith.

The best way to listen to this massive, over-stuffed, everything-including-the-kitchen-sink compilation is on shuffle mode. Hearing the inspired music, poetry and writings by these visionary artists juxtaposed with the jokers, the probing, sometimes dismissive interviewers makes me realize the Beats truly were onto something big. The rest of the world seemed torn between wanting to jump in and join the fun or belittle it as something foreign and vaguely threatening. Yes, the Beats were onto something. But most, including the Beats themselves never really figured out what it was.

(And in case you hadn't guessed, this mad collection was the inspiration for my recent Big Enchilada podcast Bargain Basement Beatniks. Dig it!) 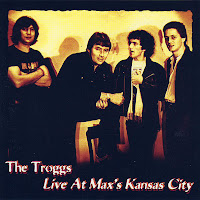 * Live at Max's Kansas City by The Troggs. Back in the latter days of the British Invasion, The Troggs were the most overtly primitive of the hitmakers. "Wild Thing" and "I Can't Control Myself" couldn't really be called "garage" music. It was more like something-living-under-the-garage rock.

And that's not a bad thing. They sound supercharged. You can hear echoes of Iggy on the cover of The Stones' "Satisfaction" and even on covers of Chuck Berry classics like "No Particular Place to Go" and "Memphis."

Yes, Reg and pals playing the obligatory "Wild Thing" and "Love is All Around," but more exciting are lesser-known songs like "Strange Movie" (a Reg original) and "Gonna Make You."

This makes my heart sing. 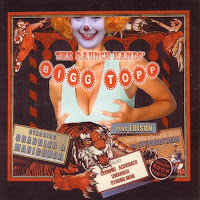 * Feel It by The Raunch Hands Bigg Top. Back in 2007, it had been 14 years or so since The Raunch Hands had recorded a studio album (Fuck Me Stupid, 1993) Their guitarist Mike Mariconda was working with another band in Austin when, he decided to call his old Raunch mates, singer Michael Chandler and drummer Mike Edison to help out.

The result was this fine stripped down rock 'n' soul screamer. It's slightly slicker than The Raunch Hands of yore -- but only slightly. There was plenty of filth and fury on this album, starting with the opening cut "Sophisticated Screw."

There's a crunching cover of an Andre Williams song that keeps crossing my path in recent months, "Mojo Hannah," but my favorite is the crazed  "One Way Ride," which has a refrain where Chandler slyly quotes a Bessie Smith song, "Moan all you moaners!" 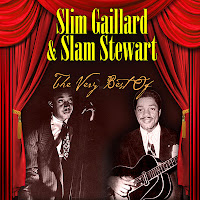 * The Very Best of Slim Gaillard & Slam Stewart. I'm a newcomer to Slim Gaillard. Back a few months ago when I was raving about Harry "The Hipster" Gibson, a friend pointed me the way to Slim, who I realize shared a spiritual kinship with the jive-talking Hipster.

Jive talk? Gaillard invented his own damned language! Seriously. He called it "vout" His performances were so wild, Jack Keruoac even wrote about him in On the Road.


'... one night we suddenly went mad together again; we went to see Slim Gaillard in a little Frisco nightclub. Slim Gaillard is a tall, thin Negro with big sad eyes who's always saying 'Right-orooni' and 'How 'bout a little bourbon-arooni.' In Frisco great eager crowds of young semi-intellectuals sat at his feet and listened to him on the piano, guitar and bongo drums. When he gets warmed up he takes off his undershirt and really goes. He does and says anything that comes into his head. ..."

The material in this generous collection (54 tracks) was recorded a couple of decades before On the Road, when Gaillard  was playing with pianist Slam Stewart as Slim & Slam. It's got the duo's first hit, "The Flat Foot Floogie," as well as novelty hits like "Groove Juice Special," "Dopey Joe," "African Jive," the insane "Laughin' in Rhythm," and perhaps their best known song, "Chinatown, My Chinatown."

I'm no stuffy audiophile, but even my old ears can tell that the sound quality is pretty bad on some cuts. In particular, the pretty ballad "Champagne Lullaby" apparently was recorded off a scratchy old 78 with little, if anything done to mitigate the defects.

But for the most part this album is right-orooni. 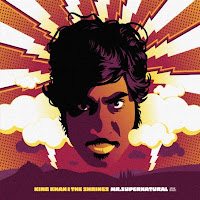 For the unitiated, Arish Khan is a Canadian who immigrated to Germany several years ago. The Shrines is a Berlin-based soul band complete with funky horn section (and for live performances, a lovely cheerleader.)

The thing that has amazed me about this band from the first time I ever heard them is how much Khan messes around, how much energy he puts into dirty jokes and silly costumes, and other fucking around. And yet this band is extremely tight and energetic. As I saw for myself at the Pitchfork Festival in Chicago a few years ago, thsi band is a powerhouse.

My favorite songs here are "Frogman," an urgent workout showcasing organist Freddy Rococo, and "I Gomez," a fast-paced chugger which at one point seems to borrow the refrain from Steppenwolf's "Sookie Sookie." 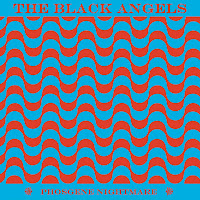 * Phosgene Nightmares by The Black Angels. The Angels are my favorite young band of psychedelic commandos from Texas.  This is a six-song EP, a B-sides collection released especially for Record Store Day in April 2011, just a few months after their 2010 album Phosphene Dream.

The first thing I noticed about this this album is that it's more laid back than their other albums -- which tend to be full-fledged sonic excursions. Some tracks here basically are acoustic numbers. You even can hear country music echoes in "At Night," while "Choose to Choose" might be a channeled Buddy Holly song.

But on "Entance (Rain Dance Version)" you definitely can tell it's the Black Angels kicking open your doors of perception.

Heads up: The Angels are scheduled to release a new full-length album, Indigo Meadow in April. 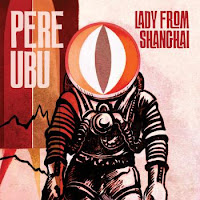 * Lady from Shanghai by Pere Ubu. Ubu mastermind David Thomas and crew, this time around, are apparently obsessed with dance music.

“Smash the hegemony of dance. Stand still. The dancer is puppet to the dance. It’s past time somebody put an end to this abomination. Lady From Shanghai is an album of dance music fixed.” Cryptic as it is, this quotation from Ubu’s website just about says it all.

Just about. But I said more a few weeks back in Terrell's Tuneup. Read that HERE. 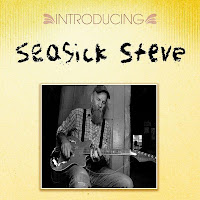 *  Introducing Seasick Steve. I guess you could call bluesman Steven Wold a late bloomer. The ex-hobo, ex-session musician and now ex-pat (living in Norway)was in his 60s released his first album Cheap in 2004.

This compilation is a modest compilation of five of his early recordings. There's a couple of tracks from Cheap with his old trio Level Devil, including the title song, which could fit in with most any punk-trash-blues project coming out of Voodoo Rhythm Records.

Also here are a couple from his second album Dog House Blues including the John Lee Hooker-influenced title song. And there's the title song from a 2007 EP It's All Good, featuring Seasick talking and singing over a repeated lick similar to the main hook on Jimi Hendrix's "Voodoo Chile.."

This is a decent introduction -- it's all good, you might say -- but I wish eMusic would offer some of those early works in their entirety.

* Conjure Man by Kid Congo & The Pink Monkeybirds. This is a new single by Kid Congo Powers (formerly of The Cramps, The Gun Club and Nick Cave's Bad Seeds) It's a slow, smokey, minor-key psychedelic tune that wouldn't sound out of place on a The Black Angels record. The "flip side" (yes, there are two songs), "Lose Your Mind" has a Bo Diddley beat behind Kid Congo's growled vocals. This set is here to whet our appetites before the release of the new Monkeybirds album Haunted Head, expected in the near future.

* tUnE-yArDs as Yoko by tUnE-yArDs. This is a two song collection. I picked it up for "We're All Water," which is is my favorite Yoko Ono song of all times. I still prefer the original, on the John & Yoko album Somewhere in New York, on which Yoko is backed up by the rough and rowdy Elephant's Memory.

But I am a new fan of  tUnE-yArDs, which features a gal named Merrill Garbus creating crazy sounds from percussion and vocal tape loops.

The flip side here is a Yoko song, "Warrior Woman" remixed by tUnE-yArDs. According to Pitchfork, this project is part of a series of singles Ono is currating to benefit the Rockaway Waterfront Alliance, which was set up to aide victims of Hurricane Sandy. Proffitrs from the vinyl versions and 100 percent of the download income from these records go to the Alliance.

Check out this video of a live version of "We're All Water" with a cameo by Yoko herself.

* "Strip Polka" by The Andrews Sisters. Believe it or not, this is one of two songs my late mother taught me as a kid. Actually she just taught me the first verse of this saga of Queenie, the cutie of the burlesque show. I always joked this is what led me to write my song "Naked Girls."

A couple of weeks before Mom died, I played her a YouTube of "Strip Polka" on my iPhone, in the nursing home. She wasn't completely conscious, but she smiled. The nurses thought I was crazy. But it meant something to us