UPDATE: Actually a version of this was NOT published in The Santa Fe New Mexican on Feb. 22, 2013.
Nobody has explained to me why it wasn't. Maybe it'll appear there next week. I don't know. 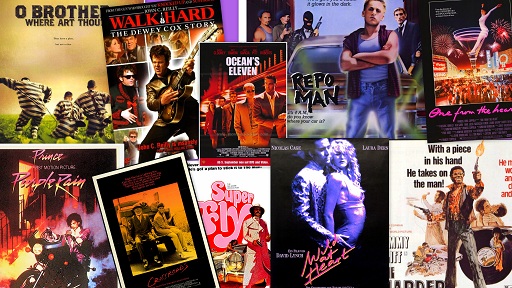 In honor of the Academy Awards, Sunday, here’s a couple of lists I’ve compiled pertaining to music and the movies.

My Favorite Songs about Movies

1) “Celluloid Heroes” by The Kinks. The ghosts of Mickey Rooney, Bela Lugosi, Marilyn Monroe and other stars rise from the sidewalks of Hollywood Boulevard, while Rudolf Valentino merely looks up ladies’ dresses in this Kinks classic. It’s obvious Ray Davies loves the glitter and glamor, but the song ends on a cautionary note: “And those who are successful, stay always on your guard / Success walks hand-in-hand with failure along Hollywood Boulevard."

2) “Touch of Evil” by Tom Russell. In this haunting song, Russell invokes the 1958 Orson Wells noir classic of the same name. The narrator, thrown out of his home by a longtime lover, identifies with Wells’ character, the drunken, obese and corrupt Hank Quinlan. He’s sinking into alcoholic despair in a border town whorehouse and like Quinlan, nobody will read his fortune. His future’s all used up.

3) “New Age” by Velvet Underground. This is a love song about a tryst between a wide-eyed fan and a a “fat blond actress” (Shelley Winters?) who’s “over the hill … and looking for love.”

4) “Beloved Movie Star” by Stan Ridgway. This song about a sad, aging actress was inspired Gloria Swanson in Sunset Boulevard, (1950). There are two versions on the album Holiday in Dirt — the “Billy Wilder Mix” and the “C.B. DeMille” mix. Both are beauties.

5) “It’s All in the Movies” by Merle Haggard. A slow, sad Hag tune from 1975 in which the singer declares happily-ever-afters to be a cruel Tinseltown illusion.

6) “Burn, Hollywood, Burn” by Public Enemy. Aided by Ice Cube and Big Daddy Kane, the prophets of rage take on racial stereotypes in the movies and drive Miss Daisey into the ocean.

7) “Martin Scorsese” by King Missile. Here’s a crazy ode to one of the great directors. It’s profane, violent and ultimately endearing. Front man John S. Hall shouts the entire lyrics: “If I ever meet him I’m gonna grab his fucking neck and just shake him /And say `thank you thank you for makin’ such great fucking movies …’ ” And so on.

8) “Tiffany Anastasia Lowe” by June Carter Cash. On this song, Cash warns her granddaughter, an aspiring actress, not to get involved with a certain director. She cracks up while trying to sing, “Now Quentin Tarantino’s women sometimes gets stuck with a hypodermic needle/ They dance a lot and lose a lot of blood …”

9) “Cheepnis” by Frank Zappa. This is Zappa’s loving homage to cheesy low-budget monster movies of the 1950s.

10) “Act Naturally” (versions by Buck Owens, The Beatles and — in late ’80s remake — Buck Owens with Ringo Starr) Dang, I wish they had put Buck in the movies, maybe a country-fried version of A Hard Day’s Night co-starring Ringo as a big Hollywood producer

2) O Brother Where Art Thou. The Coen Brothers’ 2000 reconstruction of The Odyssey in a Depression-era Deep South setting is one of my favorite films. And one of the key elements was the music. Highlights are Ralph Stanley’s powerful a capela “O Death,” the sexsational “Didn’t Leave Nobody But the Baby” by Gillian Welch, Alison Krauss and Emmylou Harris and the classic old record “Big Rock Candy Mountain” by Harry McClintock.

3) Superfly. With “Freddy’s Dead,” “I’m Your Pusher” and the title song, Curtis Mayfield’s soundtrack hands down is the best of the 1970s Blaxploitation movie soundtracks.

4) Wild at Heart. I enjoy most of the soundtrack albums for David Lynch movies, but this is the best. It’s got a long Bizarro World blues, “Up in Flames” by Koko Taylor, two reverb-heavy, dreamlike Chris Isaak songs, (including his hit “Wicked Game”), high testosterone ’60s garage rock from Them, some speed metal from Power Mad, the original “Be Bop a Lula” by Gene Vincent and two Elvis songs sung by Nicolas Cage.

5) The Harder They Come. Who could imagine back in 1973 that a Jamaican action flick about a gun-toting anti-hero would the vehicle that made reggae a household word in the U.S.? Jimmy Cliff, who had the starring role, sang several of the songs, including “Many Rivers to Cross” and the title song. But even better are some of songs by lesser-known artists —“Rivers of Babylon” by The Melodians, “Johnny Too Bad” by The Slickers and “Pressure Drop” by Toots & The Maytals.

8) One from the Heart. Tom Waits and country-pop crooner Crystal Gayle were indeed one of the oddest of odd couples ever. But they created magic for this 1982 Francis Ford Coppola musical. The duet on “Picking Up After You” is hilarious, while Gayle’s stunning “Old Boyfriends” is a thousand times more intense than any of her radio hits.

9) Walk Hard: The Dewey Cox Story: Comic actor John C. Reilly is good at parodying various styles of music from rockabilly to disco. But it took a true mad genius to pull off a satire of Brian Wilson’s Smile era with his psychedelic baroque “Royal Jelly.”

10) Crossroads. Ry Cooder was responsible for a variety of rootsy soundtracks in the 80s. This one’s a bluesy doozy. The movie is seeped in the Robert Johnson legend and Mississippi blues culture. Cooder captures the spirit. Especially impressive is his spooky version of J.B. Lenoir’s “Down in Mississippi.”

Iggy's song comes in about 2 minutes, 20 seconds in.