That’s right, new albums by Buck Owens and his longtime sidekick and ace picker Don Rich. Of course, these aren’t actually “new.” Owens died in 2006, while Rich was killed in a motorcycle accident in 1974. All the music here was recorded in the 1970s. But these aren’t re-releases. They’ve never been released before.

Owens’ album is a compilation of tunes Buck and his Buckaroos recorded for Hee Haw. As for the Jones covers record, which was recorded in 1970, this was intended to be Rich’s first solo album. 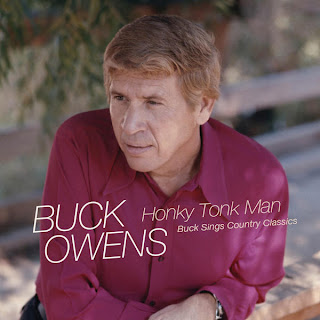 Owens, born Alvis Edgar Owens in Sherman, Texas, and Rich, real name Donald Ulrich, first teamed up in Rich’s home state of Washington in the 1950s. But, after Owens, then Rich relocated to California, the two would become the architects of what would become known as The Bakersfield Sound. This twangy honky-tonk music was a hip hillbilly back-to-basics alternative to the slicker “countrypolitan” productions coming out of Nashville in those days (which, in retrospect, was 10 times better at its worst than the slicker sounds coming out of Music City today — but that’s another story).

With Owens handling lead vocals and Rich backing him up on lead guitar and fiddle and those classic high harmonies — best heard on the choruses of “Together Again” and “Crying Time” — The Buckaroos became arguably the best-known country band in the ’60s. (Credit where it’s due: Steel guitar monster Tom Brumbley, a Buckaroo for most of the ’60s, also was largely responsible for the group’s success. Unfortunately he had bailed on The Buckaroos before the music on these new releases were recorded.)

The new Buck compilation features songs recorded between 1972 and 1975. The CD liner notes explain that on Owens’ musical performances on Hee Haw, the instrumental backing would be recorded in advance. “… Buck would sing live while the Buckaroos pretended to be playing their instruments,” the liner notes say. “The purpose for this process was to guarantee a balanced sound, and to keep from having to stop tape every time somebody in the band hit a wrong note.”

Wait a minute … I can’t imagine a bunch of musical aces like The Buckaroos hitting enough “wrong notes” to cause any serious concerns. This is why I preferred the music on Owens’ old syndicated show The Buck Owens Ranch, shot live — at least in the early years — at WKY studios in Oklahoma City. Those rare times someone did muff a note or a lyric, you’d see band members grinning and rolling their eyes.

But, back to Hee Haw, when the band recorded those songs, Owens would record what’s known in the biz as a “reference” vocal. (“It’s a lot harder to mix a track with no vocals,” Buckaroos keyboard player Jim Shaw explains in the liner notes. This allows the band members to know exactly where to put in the instrumental fills, Shaw says.

The subtitle of Honky Tonk Man is “Buck Sings Country Classics.” And indeed, the 18 songs selected for the album represent an incisive overview of country music between the late 1920s (there’s a righteously rollicking version of Jimmie Rodgers’ “In the Jailhouse Now”) up to the mid ’70s (Johnny Russell’s working-class barroom ode “Red Neck, White Socks and Blue Ribbon Beer”) and lots of great stuff in between.

My personal favorites in the batch are Owens’ versions of “Oklahoma Hills,” co-written by Woody Guthrie and his cousin Jack Guthrie who had a hit with it in 1945 and “I Washed My Hands in Muddy Water” originally recorded by Stonewall Jackson though it’s been performed by Elvis, Lonnie Mack, Charlie Rich, George Thorogood and others. (I’ve always been partial to the rock ‘n’ roll version by Johnny Rivers.) 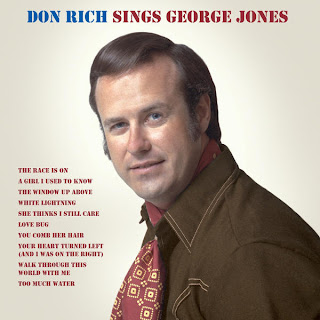 As for the Rich album, this project is something Owens encouraged Rich to do. He’d just built his own recording studio in Bakersfield and he was eager to try it out. And apparently Owens was a huge George Jones fan, which shouldn’t be that much of a surprise. The reasons Rich’s album was shelved for 40 years have been forgotten. I’m just happy it resurfaced. Rich’s voice wasn’t as, us, rich or powerful as Jones’ was during his prime, but it did its job.

Rich, with Owen’s son Buddy Allen on harmony vocals and the Buckaroos as his band, does a fine job on many of Possum’s best-known work — “The Window Up Above,” “She Thinks I Still Care,” “White Lightning,” “Walk Through This World With Me,” and “The Race Is On.”

There’s no radically different arrangements or startling revelations here. Just enthusiastic covers by a talented admirer. Besides the obvious selections, Rich threw in some relative Jones obscurities like the Harlan Howard-penned “Your Heart Turned Left (And I Was on the Right)" and “Too Much Water,” which Jones co-wrote with Sonny James.

Apparently Rich only cut 10 songs here, which wasn’t unusual for an album during the LP era but is pretty skimpy for a CD. However, this release is filled out by four Jones songs performed by Owens. (These all are Hee Haw reference recordings.)

Two of these are songs Rich also did (“The Race is On” and “Too Much Water”) but the other two are wonderful lesser-known songs “Four 0 Thirty Three” and “Root Beer,” a non-alcoholic take-off on “White Lightning.”

You have to wonder whether there’s more great music lurking in the mysterious Buck Owens vaults. I hope Buck and Don are looking down from Hillbilly Heaven smiling as old fans hear these fresh-sounding tracks from so many decades gone by.

Enjoy some videos. First here's Buck with Don and the classic Buckaroos lineup.