Richie Havens, who died yesterday at the age of 72, always seemed to be a gentle and wise person with enough soul for a thousand people. 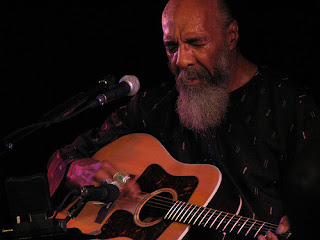 I'd been a fan even before his fabled Woodstock appearance. When I was in high school I got a double album by him called 1983.What was the significance of the title? I suppose that it was the year before Orwell's 1984, a last gasp of freedom.

He'll be remembered for singing "Freedom" at Woodstock and his interpretations of Beatles and Dylan songs. But also he ought to be remembered for his frantic guitar playing. He was a rhythm, not a lead guitarist. But what crazy rhythms came out of his hands. Especially on the faster songs, Havens was the Keith Moon of the rhythm guitar.

I went back and read a few things about Richie that I've written in the last 20 years. (And I intend to recycle some of that here.)

The first time I ever saw Havens was in the fall of 1972 at an Albuquerque airport rally for Democratic vice presidential candidate Sargent Shriver. Havens was in New Mexico filming a version of Othello called Catch My Soul. (It wasn't very good, but that's another story.)

It was a fairly surreal rally. I remember then-Gov. Bruce King urging the crowd to "knock on doorbells for George McGovern." The cowboy governor then introduced actor Dennis Hopper, who read Rudyard Kipling's poem "If."

Havens was the main reason that I and who knows how many other hippies there showed up at the airport. When he finally took the stage, he explained to the crowd that he personally didn't intend to vote, because he refused to give control of his life to anyone. Not the message the organizers wanted.

He sang some of his better-known songs, but the one that seemed to sum up the day was an obscure little tune he'd written himself called "Younger Men Grow Older."  It's an emotional song of an old man's regrets, sung to a young guy. The old man is saddened that the kid soon will have such regrets of his own. 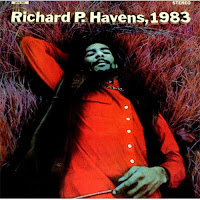 That realization was hitting a lot of the audience too. In the years to come everyone would feel old and jaded. In the near future, Nixon would be re-elected. Hippiedom would degenerate beyond recognition. And Richie Havens himself seemed to disappear.

The next time I saw him was in 1980, here in Santa Fe, in front of the Plaza Cafe. Havens — in town for a show at the old Line Camp — was looking on in horror as some local toughs were pounding the snot out of a wino on the sidewalk.

The world seemed to be growing more hateful all around him, but Havens still seemed to have a saintly presence.

I was downtown plastering posters on lampposts and utility poles for one of my own upcoming gigs, a Fiesta weekend party at the old Forge lounge. (Back then Santa Fe was pretty lax about enforcing any laws pertaining to posting such things. I miss those days.)

When I saw Havens I was starstruck. I went up and introduced myself  — as the fight a few feet away  seemed to die down — and handed him one of my posters, which had a badly-drawn picture of Zozobra along with some of my song lyrics. Havens read the lyrics: "Kick the gloom and stomp the doom, good spirits we employ," then added, "I like that."

That made my day.

And that night I interviewed him backstage at the Line Camp. No it wasn't a great moment in journalism or anything. We just talked about his life and his music and how the times they were a changin'. (And neither of us brought up the poor wino who got his ass kicked on the Plaza that day.)

The main thing I remember from that interview is that he was sweet and kind and generous with his time. And also what a great performance he'd given that night -- just a percussionist and, I believe, a bass player backing up Haven's mournful vocals and crazy rhythm guitar.

Enjoy some of his music below.